A layer of sweet apples, optional pieces of chocolate topped off by a layer of crisp spicy sugary breadcrumbs. This apple brown betty is home cooked comfort food at its best. It makes for an easy and delicious autumnal pudding. 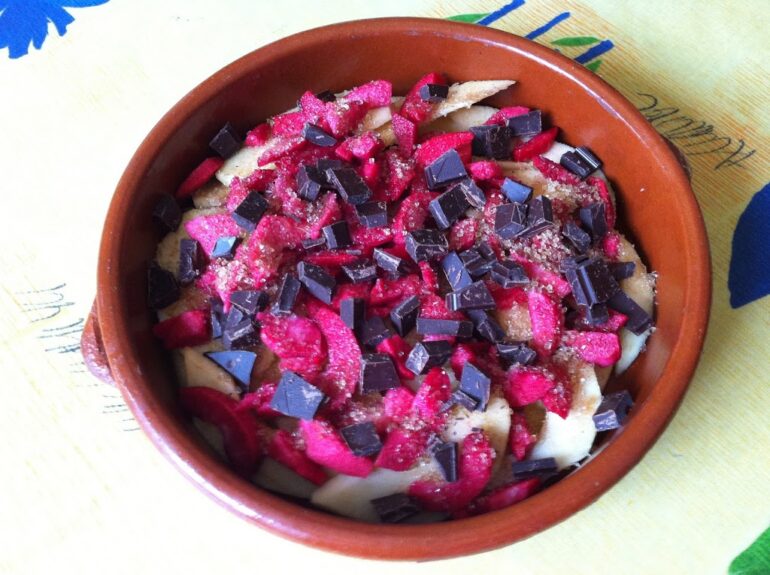 With a friend due for supper last week, loads of spare apples and some bread in need of using up, I knew immediately what I wanted to make for pudding. I grew up calling a stewed apple base with a breadcrumb top Apple Charlotte, but apparently that’s not correct. Apple Charlotte seems to be more like a summer pudding but using apples rather than summer berries. According to the great god Google, a Brown Betty is what I’ve been referring to all these years.

What is Brown Betty?

As mentioned above, brown betty is a rustic dish of stewed fruit with a crisp sugary breadcrumb topping. It’s a traditional American dessert and is similar to a crumble or crisp.

The name is lost in the mists of time, but it’s possible that the “brown” refers to a woman of mixed race. Not so sweet after all. I prefer to think of it as a recipe that comes from a loved family friend named Betty – whatever her colour.

I made my apple brown betty recipe up as I went along. But the beauty of these old fashioned homely recipes, is that they’re really easy to make and exact ingredients and quantities don’t matter too much. I’m pretty sure my mother, the Pudding Queen, never used a recipe for this particular dessert.

Apple brown betty is a great pudding for autumn. Not only is it comforting, cheap and delicious, but it makes excellent use of those apples that abound at this time of year. It’s also good for using up leftover bread.

I do love the abundance of apples at this time of year. This apple brown betty is a great way to use them up. I used two large Cornish cooking apples from my mother’s garden and 4 small red fleshed ones we found on a wayside tree. You can use whatever breadcrumbs you like, but wholemeal is obviously better. I used some of my rye sourdough to make the breadcrumbs for this particular dish.

Chocolate is entirely optional, but it’s definitely worth trying. I had some orange flavoured dark chocolate that I thought would work particularly well with the apples, so that’s what went into my apple brown betty.

The picture above may be rubbish. It was dark after all, but this pudding is so good. Why, I wondered, did it take me so long to make it?. The breadcrumb top was deliciously spicy and nicely crunchy. The chocolate had melted comfortingly into the apples which were soft and juicy. And a dollop of crème fraîche over the top was the perfect finishing touch. The three of us polished it off happily as the conversation drifted from marine biology to tango dancing via druidic studies.

If you’re after more hot pudding inspiration, why not take a look at these recipes in my Pudding category? And for more apple ideas, hop over to this 80 seasonal and delicious apple recipes to make this autumn.

Thanks for visiting Tin and Thyme. If you make this apple brown betty, with or without the chocolate, I’d love to hear about it in the comments below. Do share photos on social media too and use the hashtag #tinandthyme, so I can spot them.

To celebrate her new blog home, Kate of What Kate Baked (formerly Kates Cakes & Bakes) has issued an Autumnal Challenge to bake something homely, comforting, warming and autumnal. She even has a prize up for grabs. This pud fits the bill nicely – in my humble opinion!

This is a tad cheeky, but I’m fast running out of time and have a long queue of posts waiting patiently to be published. So I’m also submitting this to Fabulicious Food’s Simple and in Season.