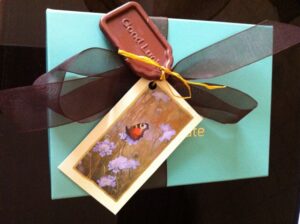 It was my lovely cousin’s wedding last weekend and as she was getting married to a Welshman, the wedding took place in Wales. Now this was not your average wedding but a rather grand affair lasting three days; due to work commitments, there was no time for a honeymoon. This gave the bride and groom a chance to spend time with their family and friends and likewise gave me an opportunity to have a proper catch up with my family. Day one was a spa day for some, with others such as myself, meeting the bride to be in the evening for a glass of champagne. I wanted to make her something as a pre-wedding soother – chocolate seemed the appropriate choice. I wasn’t sure what her preferences for chocolate were, but guessed she might be a milk chocolate sort of girl. I decided to make a bar of salted milk chocolate and also some plain milk chocolate spoons in case she didn’t like the salted option. Luckily, this turned out to be a favourite of hers. I also used a Good Luck label mould that I bought from Sew White just before Christmas along with the chocolate spoon moulds. So, it was time to put some of the tips I’d learnt from the chocolate course to good use and try my hand at chocolate tempering once again.

The next day, the Golden Ticket looked beautiful, the spoons had bloomed and did not look beautiful at all. I suspect that my digital thermometer has not been calibrated correctly (mainly because I couldn’t figure out how to do it) and is showing a lower temperature than the actual one. I’m assuming that as the salted chocolate had been left longer and was stirred a second time, it had in fact cooled to the correct temperature, whilst the first batch was still too hot.

The Wedding Day itself dawned bright and fair, but there was still a decided nip in the air. Caerphilly Castle proved to be a rather impressive setting for the wedding. It was built in the 13th Century by an English baron at the time of Henry III in a successful bid to keep the Welsh at bay. Surrounded by a moat and lakes, this is the second biggest mediaeval castle in Britain, Windsor being the first. It is particularly famous now for its leaning tower, damaged during the Civil War, which, whilst not quite as tall as the leaning tower of Pisa, inclines at a steeper angle. We had plenty of opportunities to explore the castle thoroughly.

Impressive the castle may have been, but warm it was not – there was many a goose pimple to be seen throughout the day and evening as we all shivered in our wedding finery. Stiletto heels were in abundance, how they coped with the terrain I do not know, but thankfully no injuries occurred. The bride looked absolutely stunning and the wedding breakfast (at 16:30) was impressive. The waiting staff were excellent – friendly, but professional, managing to serve the food so it arrived hot and more importantly was delivered to the right people. My vegetarian options were scrumptious. I had a saffron, pea and asparagus risotto to start with and a tomato polenta stack for my main course. The pudding was a chocolate fondant which was appreciated by all. We’d previously enjoyed canapés along with champagne up in one of the towers – how those stilettos made it up and down the ancient spiral staircase, I’ll never know. The canapés were also served warm and were particularly welcome. Speeches and dancing followed with the bride and groom doing an impressive first dance inspired by Dirty Dancing – they must have been practising for quite some time.

Day three was another gathering of family and friends, this time for a hefty lunchtime meal in a nearby inn, with lashings of punch for those not driving. Many were staying the night, along with the bride and groom, but not us. With heavy stomachs but cheery hearts, CT, my mother and I wended our way back home to Cornwall.