Home » Meal Type » Pudding » Eve’s Pudding: an Apple and Ground Cherry Special
Share on TwitterShare on FacebookShare on PinterestShare on WhatsAppShare on RedditShare on E-mail
Jump to Recipe 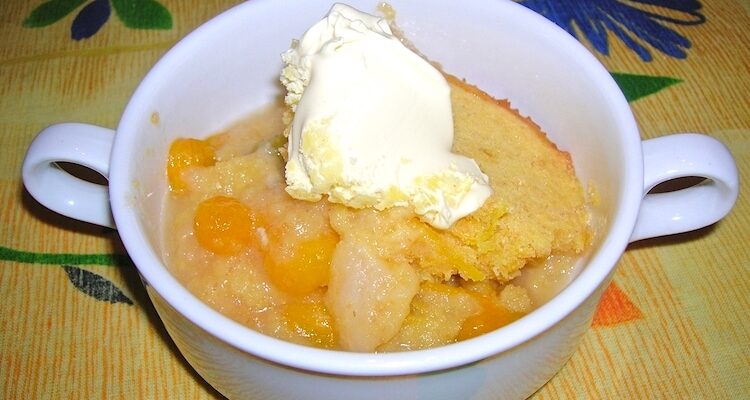 I have a confession to make and it may be shocking to some: this pudding has no chocolate in it. There I’ve said it!

This is a pudding I used to make regularly about ten years ago following on from a Sophie Grigson cookery series on television.  I haven’t made it in such a long time, however, I thought it was due for a revival. And because it’s such a good one, I thought I really ought to share it. Sophie’s version didn’t contain ground cherries and I expect my method has morphed quite a bit from the original, but I think I’ve retained its spirit.

One of the reasons I like Sophie’s version of Eve’s pudding is that it uses lemons. This lifts a traditional rib sticking British pud to something a bit more refined. I’ve used a mixture of wholemeal spelt flour and polenta to make the sponge. This gives it a bit of texture, which I really like. The polenta also gives the whole pudding a beautiful autumnal glow as the yellow corn meal almost matches the golden ground cherries.

You can of course, omit the ground cherries and use all apple instead. Or substitute for the fruit of your choice.

The juice of the fruit bubbling at the base is absorbed into the bottom of the sponge which makes it delightfully moist. In effect you end up with three layers. There’s the fruit itself, the gooey sponge and a crisp yet light top. We consumed it avidly hot from the oven with Cornish clotted cream – of course!

This really is a rather fabulous if simple pudding. If you can’t get hold of clotted cream, try it with custard. I expect a lot of you would prefer that anyway.

For an equally delicious chocolate version, omit all but a squeeze of lemon. Instead, add a little ground cinnamon to the fruit and to the flour then melt some dark chocolate along with the butter. It makes for a completely different pudding and is really good for those dark autumn and winter nights.

If you’re after more hot pudding inspiration, why not take a look at these recipes in my Pudding category? And for more apple ideas, hop over to this 80 seasonal and delicious apple recipes to make this autumn.

Thanks for visiting Tin and Thyme. If you make this Eve’s pudding or the chocolate version, I’d love to hear about it in the comments below. And do please rate it. Have you any top tips? Do share photos on social media too and use the hashtag #tinandthyme, so I can spot them.

If you’d like even more pudding recipes, follow the link and you’ll find I have quite a lot of them. All delicious, of course.

A simple but classic fruit sponge dessert that's most often made with apples. Once baked, you end up with three layers: the fruit itself, a gooey sponge and a crisp yet light top. This version of Eve's pudding includes ground cherries as well as apples and the sponge is made with a mix of wholemeal flour and polenta for a bit of added texture.
Prep Time25 mins
Cook Time35 mins
Total Time1 hr
Course: Dessert
Cuisine: British
Keyword: apples, ground cherries, polenta, wholemeal spelt flour
Servings: 6 people
Calories: 348kcal
Author: Choclette @ Tin and Thyme

You can of course, omit the ground cherries and use all apple instead. Or substitute for fruit of your choice.For a chocolate sponge version, just add a little lemon zest and a squeeze of juice to the fruit along with ¼ tsp ground cinnamon. For the sponge, omit the lemon and add 50g dark chocolate when melting the butter and ½ tsp of ground cinnamon to the flour.Please note: calories and other nutritional information are per serving. They're approximate and will depend on serving size and exact ingredients used.