Initially, I thought I might have to make my own birthday cake for my tea party, but as it happened, one of my splendid aunts stepped in and made a scrumptious brandy soaked chocolate cake. However, as I already had something in mind, I thought I’d go ahead and make a cake anyway – you can never have too much cake – in my humble opinion.

Last month, I made rose syrup and rose sugar so I was keen to utilise these – the sugar smelt divine. The natural progression, it seemed to me, was to use them in a Victoria sponge, one filled with cream and strawberries. At about this time I was asked if I’d like to participate in a British Baking competition from Baking Mad. This consisted of baking something from the street party recipes section of Baking Mad, using primarily British ingredients. I was sent some of the required ingredients. Amazingly, Victoria sponge filled with cream and strawberries was one of the recipes offered. Unusually for me, I had made the rose sugar (fragrant rose petals left in a jar of caster sugar) using Silver Spoon sugar, so I had just what was needed. The great thing about this sugar is that it it is made from British grown sugar beet, thereby not only being relatively local, but also supporting British growers and British manufacturing. 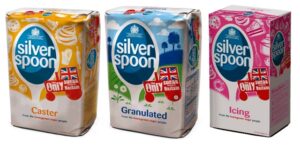 “Silver Spoon sugars are made from sugar beet which is a large pale brown root crop, similar to parsnip which grows in the temperate climates of Europe and North America. The sugar beet that goes into Silver Spoon sugars travels a short distance to the factory (an average of only 28 miles) direct from the fields around Bury St Edmunds in East Anglia. Silver Spoon work with 1,200 local farmers to grown the beet, which is then made into their range of homegrown sugars for families all over the country.
Silver Spoon are committed to reducing energy use, emissions and waste at every stage. All raw materials in the factory are aimed to be transformed into sustainable products.” 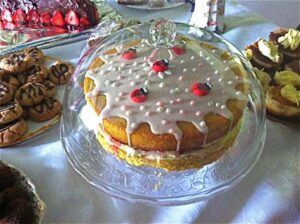 In addition to the British sugar and British flour I was sent, I also used British icing sugar, butter, duck eggs, cream and roses. In fact, it was only the white chocolate that wasn’t British. Does this mean I might be in with a chance of winning the prize of a hamper of British produce? Probably not, but it’s all good fun.

My version of the recipe not only used rose as a flavouring, rather than the suggested vanilla extract, but also white chocolate in the filling. I increased the quantities as I wanted a large cake and used my usual half wholemeal, half white flour mix. Intriguingly, the recipe used steam, presumably to help the cake rise. I haven’t come across this method of making cake sponge before, so I was interested to see if it made any difference. Ideally I had wanted to fill the cake with plain cream and strawberries, but as I had to make it all up the day before the party, I opted for a white chocolate and rose cream filling instead and just hoped the strawberries would survive.

The cake was wonderfully light, despite the wholemeal flour. I put this down to my muscle power with all that creaming, but I suspect it was more likely to have been the addition of steam in the oven. The rose flavour was subtle, but definitely present. It was a little too sweet for my taste and really needed unsweetened cream in the middle to offset the sugar. But it was pronounced thoroughly delicious by all who tried it and I was happy to accept that.

As this recipe uses both seasonal strawberries and roses, I am linking this up to Ren’s Simple & In Season challenge, hosted this month by Homemade by Fleur.