This recipe for Chinese walnut cookies will have you coming back to it again and again. The biscuits are deliciously crisp on the outside & slightly chewy in the middle. They contain buckwheat flour, wholemeal spelt and coconut oil, so they’re a bit healthier than your average cookie recipe.

I’d not heard of The Dumpling Sisters until their newly published book passed my way recently. This endearing name for Amy and Julie Zhang highlights their passion for dumplings.

It’s a lovely book with recipes for easy homemade Chinese food, but it’s heavily meat orientated, so not really one for me. However, there were a couple of baking recipes in the back which drew my attention and their sweet and salty walnut cookies were one of them.

The cookies are easy to make and sooooo moreish. A speciality of Chinese New Year,  these hup toh soh are supposed to resemble a brain and thus boost mental capacity. Any excuse to eat a few more. They are crisp on the outside, soft and chewy in the middle with crunchy bits of walnut to give a bit of bite as well as flavour.

They may not be the prettiest biscuits in the tin, but they tasted so good, I made a second batch soon after finishing the first.

Unusually, the recipe for hup toh soh contains cornflour as well as a mixture of butter and lard and it uses granulated sugar rather than caster. Of course, I didn’t follow the recipe exactly either time. I made the first batch of Chinese walnut cookies with half wholemeal flour and coconut oil instead of lard.

The second batch I made the same way, except I substituted buckwheat flour for the cornflour to make them a little bit healthier. The buckwheat batch were, surprisingly, crisper and lighter than their predecessors, but were equally as delicious. The good thing about all of them is that they are quite small, so I feel justified in having two rather than one with my cup of tea.

If you’re interested in even more cookie recipes, you’ll find plenty in my biscuit category. Go on, take a look.

Thanks for visiting Tin and Thyme. If you make these Chinese walnut cookies, I’d love to hear about it in the comments below or via social media. Do share photos on your preferred social media site and use the hashtag #tinandthyme, so I can spot them. 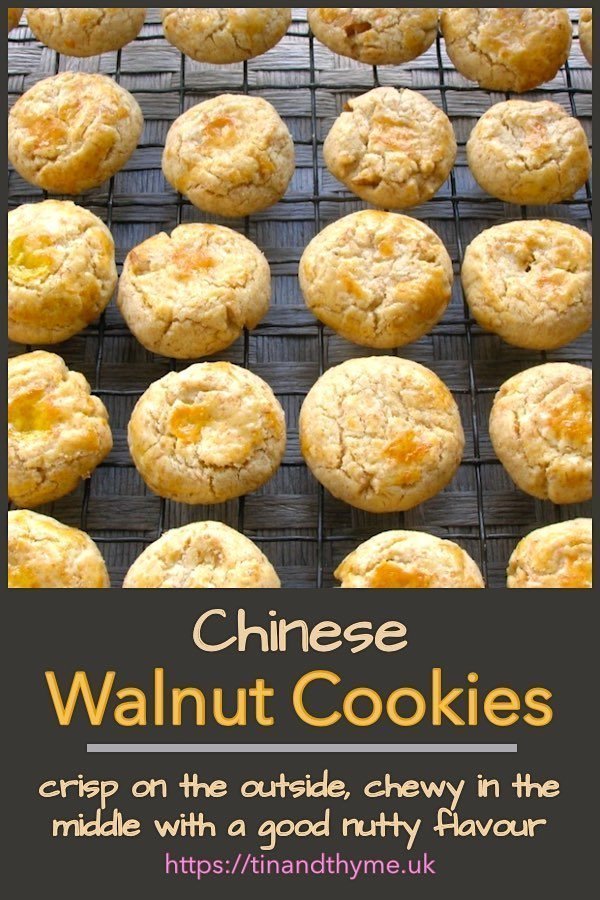 Adapted from The Dumpling Sisters Cookbook by Amy and Julie Zhang Please note: calories and other nutritional information are per serving. They're approximate and will depend on exact ingredients used.

I’m sending these gorgeous little Chinese walnut biscuits off to Bake of the Week at Casa Castello. In my book, these are more biscuit than cookie.

They also go to Bookmarked Recipes over at Tinned Tomatoes as these cookies were the very first recipe I bookmarked from The Dumpling Sisters Cookbook.

« Previous post link Plump for a Pimms or Mash up a Mojito?
In My Kitchen – July 2015 » Next post link