With so many limes in need of using up, a key lime pie was definitely going to be on the menu. As a key lime pie newbie it was just a question of whose recipe I was going to use. New to key lime pie? Yes, really. I don’t know how I’ve managed it, but in all my years of cooking I have not only never made one, but I’ve never eaten one either. 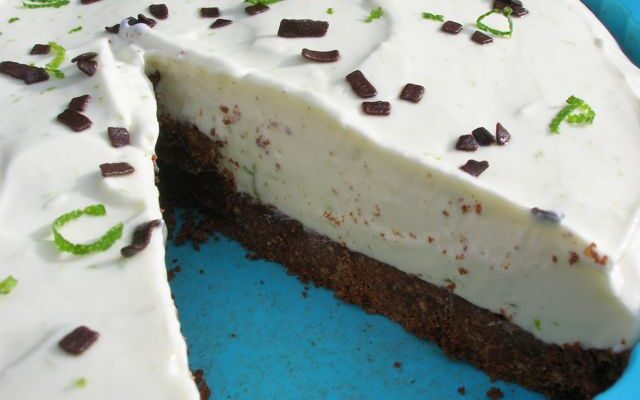 There was a recipe in my new book Scandilicious Baking by Signe Johansen which I was keen to try; there was a fabulous sounding one in Tea with Bea using 13 limes; I had a cheesecake version from Eric Lanlard in Home Bake and two versions from Nigella in How to Be a Domestic Goddess. Not one of them had a chocolate version – well really! With all my limes, it would have been a good opportunity to make Bea’s version, but in the end the Forever Nigella challenge won me over and it was one of Nigella’s recipes I adapted.

Ooh my, was this scrumptious or was it scrumptious? Nothing more to be said, except I will not be leaving it quite so long before I make these again.

The theme for Forever Nigella this month is Nostalgic Nigella. Well, I may have never made or eaten a key lime pie before, but I have heard about these American beauties for many years. Having spent my first year of life in New York, they somehow make me feel nostalgic for the American childhood I never had, I bet key lime pie would have been a staple in our brownstone apartment. Hosted this month by the The Botanical Baker, it’s home is with Maison Cupcake.