A truly decadent dessert for those long dark winter nights. This Baileys chocolate banana pie has a dark chocolate biscuit base which is covered in thinly sliced bananas. On top of this goes a mixture of yogurt and cream with a dash of Baileys.

On New Year’s Day, we were off to visit friends for a feast by the fire. Something special was required. I had some bananas that needed using up and some odds and ends of chocolate that I wanted to finish off. I also had two 180ml pots of Baileys Extra Thick Cream I’d been sent in order to try out in a recipe. So my Baileys Choconana Pie was born.

The Baileys cream was fresh cream, but with a few additional ingredients. I was expecting Baileys but was a little surprised at the addition of sugar and starch. I would have thought the Baileys would be enough of a sweetener on its own. However, as it was already thick, it was easy to use, no need for whipping. It tasted as I expected: sweet cream with a hefty dose of Baileys – decidedly moreish. It would be good to accompany many a festive pud or mince pie or to use as an ingredient in its own right. 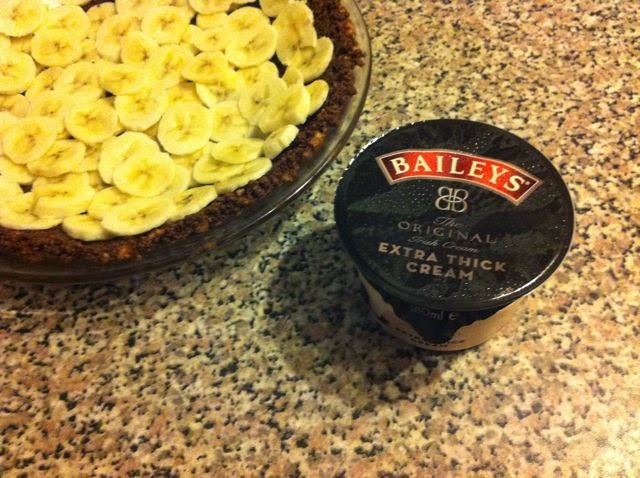 The pie was of course indulgent and delicious. But really this is exactly what’s needed to celebrate the New Year.

If you’re keen on the odd drop of Baileys, here’s another indulgent dessert you might like. It’s this easy Baileys marbled chocolate ice cream with Baileys chocolate sauce.

Thanks for visiting Tin and Thyme. If you make this choconana pie, I’d love to hear about it in the comments below. Do share photos on social media too and use the hashtag #tinandthyme, so I can spot them.

If you’d like further inspiration for make ahead desserts, I have quite a few of them.

A dark chocolate biscuit base covered in thinly sliced bananas which are then covered with a mixture of yogurt and cream with a dash of Baileys. I used Baileys extra thick cream, but whipped double cream with a slug of Baileys would work just as well.
Course: Dessert
Cuisine: British
Keyword: Baileys, bananas, chocolate, pie, pudding
Servings: 8 people
Author: Choclette

As an alternative to the Baileys extra thick cream, just whip up some double cream and add a glug or two of Baileys to it.

As I had rather a lot of bananas that needed using up and this was also a good excuse to tidy up up my chocolate shelf, I am submitting this pie to Elizabeth’s Kitchen Diary for her No Waste Food Challenge.

This Baileys chocolate banana pie made us all very happy. So I’m entering it into Calendar Cakes over at Dolly Bakes where the theme is If it makes you happy …

I was sent two pots of Baileys Cream to use in a recipe. There was no requirement to write a positive review. As always, all opinions are my own.