Growing and harvesting cocoa beans to provide the chocolate we all love so much can be a very hard life. And it’s often very badly paid to boot. For this reason I do my best to buy fairly traded chocolate whenever I can. Fairly traded chocolate gives a fair price for the cocoa bean to help farmers pull themselves out of poverty and live a decent life. One of the main proponents of this is the Fairtrade Foundation who have been actively campaigning to improve peoples lives in the developing world for twenty years now.

Cocoa is, of course, not the only product that is open to abuse: thankfully Fairtrade wine, cotton, coffee, bananas, flowers and gold are now available, with additional products coming on to the market each year. This week marked the beginning of Fairtrade Fortnight and the focus this year is on tea, cocoa and sugar. Do have a look at the site where you can watch a short film, Fairtrade Matters, showing how Fairtrade has changed two lives in particular. There are also a number of offers and prizes available.

Choose products that save lives.

I was sent a bundle of Fairtrade chocolate goodies to use in a recipe. Milk chocolate hearts and white chocolate and strawberry hearts from Divine were a welcome novelty. I have written many times about this company which is part owned by the growers themselves. Head to my post Divine intervention for more details. 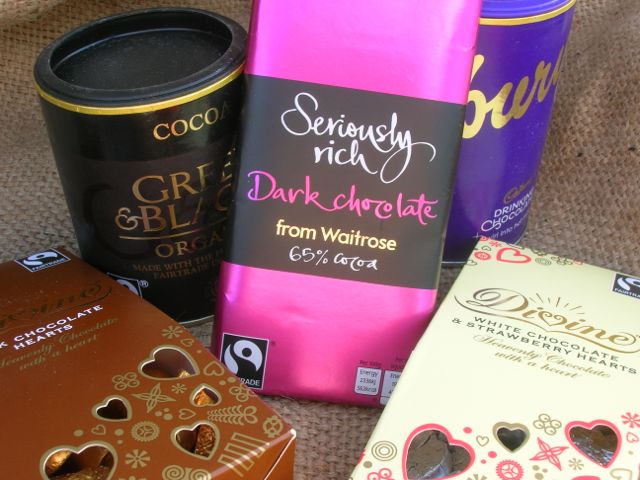 I go through a lot of Green and Black’s cocoa, which is not only Fairtrade and has been for many years, but is also organic, so I was pleased to see a tub of it in the parcel. A tub of cadbury’s drinking chocolate reminded me of school. This too became Fairtrade in 2009 and tripled the sales of Fairtrade cocoa overnight. Lastly, there was a bar of Seriously, a new Fairtrade range from Waitrose. The cocoa for these bars comes from co-operative farmer groups in the Dominican Republic.

So, what to make? Well a chocolate pie of course. Following hot on the heels of my cashew brownies, I couldn’t resist reaching for the cashew nut butter again. I managed to use all of the products sent, other than the white chocolate strawberry hearts and gave myself a congratulatory pat on the back as I savoured a slice of what is, a most divine pie.

Thanks for visiting Tin and Thyme. If you make this decadent chocolate cashew pie, I’d love to hear about it in the comments below or via social media. Do share photos on social media too and use the hashtag #tinandthyme, so I can spot them. For more delicious and nutritious recipes, follow me on Twitter, Facebook, Instagram or Pinterest. 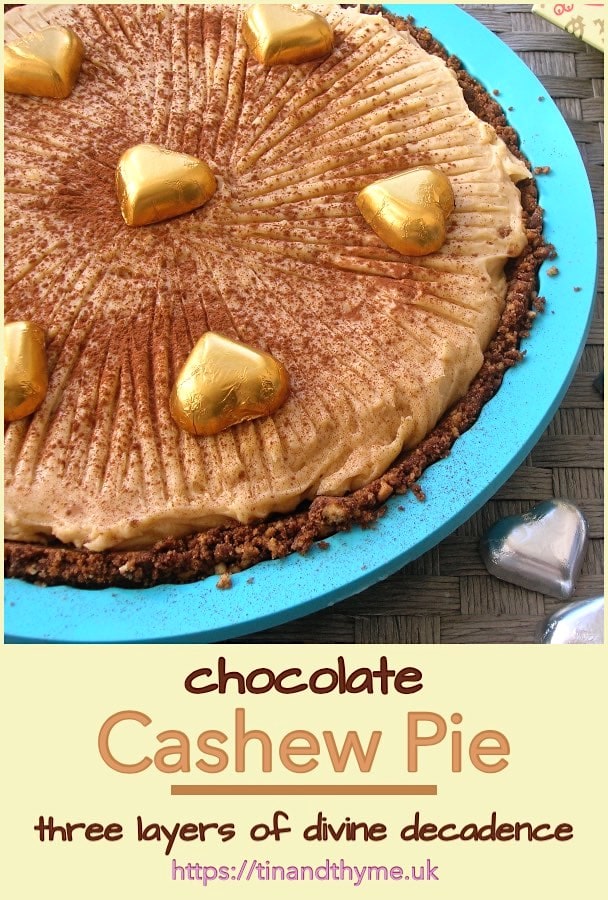 It’s so good, I’m also sending it to Lucy at SuperGolden Bakes for #CookBlogShare.