Bursts of fruity tartness make a gorgeous contrast to sweet white chocolate chunks. These rhubarb and white chocolate muffins are a great way to use this classic British vegetable. They’re moist, popular and very moreish. 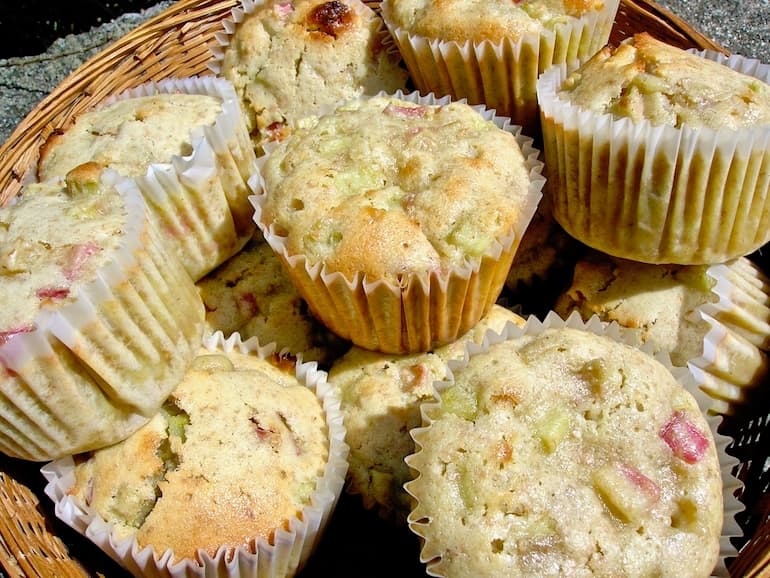 Grow Your Own Rhubarb

Yes, as stated above, rhubarb is actually a vegetable, not a fruit. But as we mostly use it for cooking sweet stuff, it’s often referred to as fruit. It’s quite an easy crop to grow in our cold climate, though it likes a moist fertile ground. It comes into season in early spring when there really isn’t much else in the way of fruit to eat.

On our old allotment we used to harvest massive amounts of rhubarb and it was always a challenge to try and use it up. I used to make crumble of course, rhubarb and ginger cake, rhubarb polenta cake and rhubarb vodka. I’d give it away and even managed to sell it at our local organic shop a few times.

Since losing that plot, however, we’ve been rhubarbless for three years now and I really miss it. We planted a crown in our new plot this year, but won’t be able to harvest anything until next year.

Luckily, we passed a crown of our old rhubarb to my mother and a couple of weeks ago she gave me a nice bunch of it to use – hoorah!  I’d already spotted a rhubarb and white chocolate muffin recipe over at The Chocolate Teapot. It sounded delicious, so I knew exactly what I wanted to make with it.

The rhubarb donation happened to coincide with a wild food walk. This combined a local tour of three vegetable plots of varying styles, one of which was ours.

The walk and tour was a great success. This was mostly because we had a good turnout, the weather was fabulous, the plots were appreciated, lots of knowledge was shared and the tea was totally scrumptious. Unfortunately I forgot, again, to take lots of photographs as we went along. Oops!

We had to have tea and cake en route of course, so these rhubarb and white chocolate muffins were my contribution. Whilst these are called muffins, they’re more like cakes really. Very little mixing is needed for muffins, whereas these rhubarb and white chocolate cakes require creaming butter and sugar together, before adding any additional ingredients.

As per usual, I want my own way with the recipe. As I had Greek yoghurt in the fridge and no buttermilk I made a substitution using part yoghurt and part water.

I also added vanilla, which wasn’t in the original. Much like rhubarb and ginger or rhubarb and orange, vanilla makes an excellent partner to rhubarb. For the vanilla element I used Green and Black’s white chocolate, which is very vanillary and vanilla sugar. I have a jar of granulated sugar with vanilla pods in it permanently on the go. But you could use vanilla extract instead.

And of course I added wholemeal flour. I should probably have gone for a hundred percent wholemeal, but in the end I opted for a half and half mix.

Because I’d included so much rhubarb in the muffins, the result was particularly moist. But oh, so good to eat. The tartness and flavour of the rhubarb was a great contrast to the sweetness of the white chocolate. And really, who wants a dry muffin?

All of them disappeared and the feedback was very positive. I did notice one participant going back for a sneaky second.

What Flavours Pair Well With Rhubarb?

As you can see if you head to my rhubarb crumble post, rhubarb pairs well with a number of other ingredients. Ginger and orange are classic partners, however, less well known but equally good are: vanilla, honey, rose, strawberries and cardamom. One of the reasons these rhubarb and white chocolate muffins are so good is because of the vanilla content in the white chocolate.

Rhubarb makes excellent cakes, puddings and pies and of course it’s an excellent accompaniment to custard. But it’s also good in savoury dishes too. Have you thought of rhubarb chutney for example?

Thanks for visiting Tin and Thyme. If you make these delicious rhubarb and white chocolate cakes, I’d love to hear about it in the comments below. And do please rate the recipe. Have you any top tips? Do share photos on social media too and use the hashtag #tinandthyme, so I can spot them.

If you’d like more individual cake recipes, follow the link and you’ll find I have quite a lot of them. All delicious, of course.

If you don’t have vanilla sugar use ½ tsp vanilla extract instead. And if your white chocolate doesn’t also contain vanilla, use a full teaspoon.Please note: calories and other nutritional information are per serving. They’re approximate and will depend on exact ingredients used.