When it comes to baking, are you never quite sure what flour you should use? Would you like to bake with healthier flours, but you’re not really sure where to start? This post should give you a bit more idea as to some of the flours you can use. Plus how to start baking with wholegrain flours. 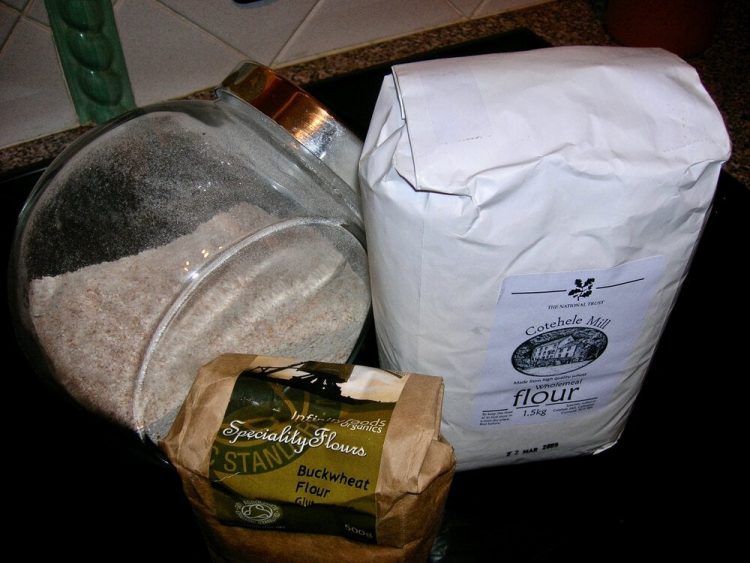 Whatever flour a recipe states, I tend to substitute a different one! This is mostly because I try to turn rather decadent bakes into something that can be as healthy as possible whilst still remaining delicious. I very rarely use plain old white flour when baking. Nor do I generally use self-raising flour as I prefer to add a good quality gluten free raising agent myself.

Stoneground wholemeal spelt flour is my staple – see key ingredients for healthier baking. It’s about the healthiest wheat flour you can get and can often be eaten by those who don’t normally fare too well with wheat. However, I will often use a combination of flours depending on what I have to hand and what I feel like using at the time.

The best flour I have ever used was ground less than half an hour before I baked bread with it. It was the most delicious bread I think I’ve ever eaten. Sadly, for most of us, our flour is unlikely to be that fresh.

For most cakes I use wholemeal spelt. Occasionally, however, I’ll mix it with white spelt as this gives a lighter texture than straight wholemeal. Sometimes, I substitute some other flour for some of the spelt. Buckwheat works particularly well as it is a very fine flour. These are the flours I use on a regular basis. All are, of course, organic.

The main thing is not to worry too much about what flour the recipe states, just use whatever you have to hand. If you’ve never tried using anything but plain white, you could just try substituting a tbsp with an alternative flour the next time you are baking. See how it goes and if all is well, build on that.

Baking for a New Food Culture

I have just booked onto Baking for a New Food Culture with Andrew Whitley. He’s the Real Bread guru and the course is taking place at Shumacher College in a few weeks time. I’m terribly excited about this and I’m hoping I’ll learn heaps more about flour and the best flours to use (as well as bread making of course).

The course was fantastic and I did learn about flour, including wholegrain flours. You can read about it in my post Bread Matters.