What a fantastic time I had at Schumacher College and what a great place it is to unwind and meet interesting folk. The course, Baking for a New Food Culture, gave me even more than I had hoped for. I now have a new food hero, Andrew Whitley, the authority on all bread matters! 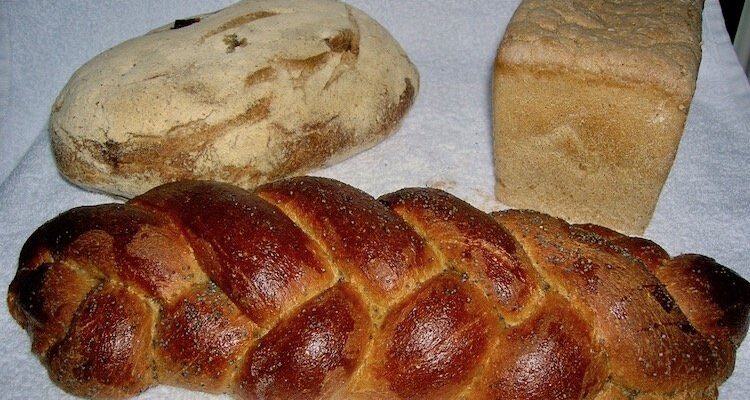 We learnt about and discussed the history, politics and health properties (or not) of bread in the mornings and baked wonderfully nourishing and tasty bread in the afternoons.

Andrew had us “air kneading” Pain de Campagne (a wheat sourdough) and having a go at a Russian Rye (another sourdough). One of the reasons I wanted to go on the course was to learn to make a good sourdough that wasn’t actually too sour. I’ve had a few attempts at making my own sourdough bread from scratch and although the loaves turned out well, they were just too too sour. Luckily, both of these sourdough breads turned out well, despite the unusual method of kneading. They were completely delicious with just the right note of tanginess without beingat all vinegary. Result!

Day two saw us air kneading again. This time we made Ciabatta and Focaccia. Again, both were delicious and very quickly consumed during one of the gorgeous meals served at Schumacher.

Day three and we were making Challah, an enriched and sweetened Jewish bread traditionally eaten on the Sabbath. This one I didn’t get to taste as I gave it to my wonderful friends who had kindly taken in CT to look after while I was away on the course. They tell me it was lovely.

Sheila Dillon of the Food Programme on Radio 4 spent some time with us. She showed the film The Real Dirt on Farmer John and then led a discussion on the need to get everyone to understand the importance of eating real food produced by real people.

See Andrew’s site Bread Matters for further information about the importance of real, non-industrialised bread. There’s a short video clip which shows something very similar to what we were doing at Schumacher, including air kneading. Here, you can also buy copy of his highly informative book “Bread Matters: why and how to make your own” and / or join the Real Bread Campaign. You can also get hold of some of his amazing sourdough starter.

OK, this post doesn’t have a great deal to do with chocolate, but it is very much to do with real food AND on the last night we were served the most delicious chocolate and medlar tart!