An easy to make and delicious to eat vegan autumn pea stew. It’s made with British carlin peas, sweet red peppers and the last crop of tomatoes. Serve with rice, quinoa, barley, jacket potatoes or crusty bread for a comforting and satisfying meal. 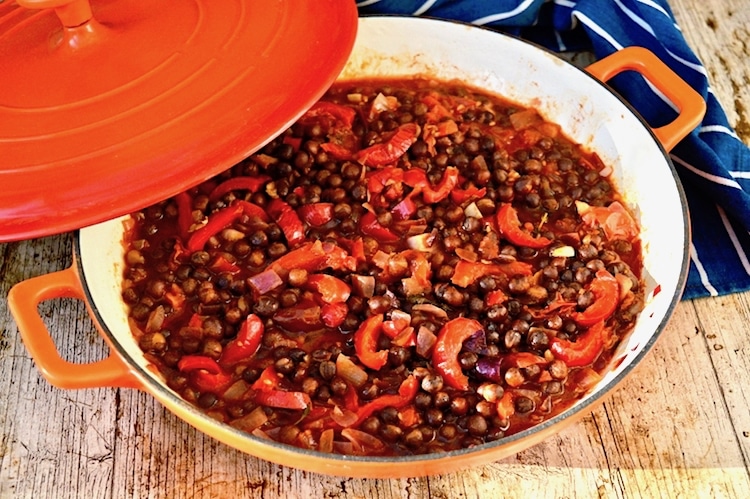 As some of you may have noted, I recently received an exciting bundle of British grown pulses and grains to try out. I found some of the contents quite intriguing, but I’m really enjoying trying everything. UK readers, you still have a chance to win the very same bundle for yourselves. The giveaway ends on 24th October.

I have to confess, that I’d never heard of carlin peas until I received the aforementioned bundle. CT tutted in his usual “how could you possibly not heard of that” fashion. But I did feel a little ashamed. Carlins also known as grey or black badgers are a very British pea. In fact, when I mentioned them, I got several comments about Carlin Sunday. Apparently eating carlin peas, particularly on the fifth Sunday in Lent, is a big thing in the North East of the country and has been for a long time.

In Lancashire, carlin peas are known as black peas and they have a very interesting way of serving them. Parched Peas, as the recipe is termed, were traditionally served on Bonfire Night and other festivals. They’re simply boiled then served with salt and vinegar, often in a paper cone. Butter may or may not be included.

I don’t know why, but I was surprised to find that the peas taste both sweet and nutty when cooked. Indeed, they have far more flavour than many pulses I’ve tried. The texture is pleasantly firm, so no mushy peas here. In fact they make a good chickpea substitute.

Hodmedod’s have an intriguing recipe for carlin pea brownies which I’m going to have to make at some point. As soon as I saw the lovely reddish brown colour of the carlins though, I wanted to make a red pea stew with them.

CT grew the onions, peppers and tomatoes as well as the chilli and garlic, so it’s almost a homegrown recipe. Maybe he’ll grow carlin peas next year.

You can make this red pepper pea stew with either dried carlin peas or tinned ones. Tinned are always good if you’re in a hurry, but I recommend the dried ones. True, you need to be a bit more organised as you have to soak the peas overnight, but in my experience pulses are much more digestible if prepared this way. Plus you have more control over the texture of your peas. For this recipe it’s nice to have a bit of texture, but you can boil them for longer if you want them super soft.

If you can’t find carlins, then try using another brown pulse instead. But they’re worth getting hold of if you can.

At one point, I thought I might add some of the quince jelly I’ve just made. But on second thoughts, I realised that the peppers were plenty sweet enough. In the end I decided to keep the flavouring fairly simple. You’ll find thyme, garlic, chilli, smoked paprika, vinegar and some fermented barley. I’m in love with the fermented barley that came in my bundle and I’m using it in all sorts of things. But, if you prefer, you can use miso or even soya sauce instead. As with most seasonings, you should adjust these to suit your own tastes.

As this recipe for sweet red pepper and carlin pea stew is for four people, we enjoyed it two nights running. The first night we served it with fluffy brown basmati rice and the second we reheated it and ate it with crusty bread. It was delicious both nights, but it was at its best on the second day as the flavours had melded and developed.

The carlin pea stew is robust in flavour and hearty in substance. So it works particularly well if you serve it with bland foods such as rice, quinoa, barley or even a jacket potato.

If you’d like even more recipe ideas for pulses, you’ll find plenty on my Peerless Pulses Pinterest board.

Thanks for visiting Tin and Thyme. If you make this carlin pea stew recipe, I’d love to hear about it in the comments below. And do please rate it. Have you any top tips? Do share photos on social media too and use the hashtag #tinandthyme, so I can spot them.

If you’d like more vegan recipes, follow the link and you’ll find I have a few. All delicious, of course.

Peas can be covered in boiling water and left to soak for an hour, but try for a longer cold soak if you can. I aim to soak mine for 24 hours.Bay leaves not only give flavour to the peas as they cook, but they are said to reduce flatulence in pulses and make them more digestible. Sometimes I’ll use a piece of dried kelp seaweed instead. This is meant to have a similar effect.Alternatively use tinned carlin peas.Please note: calories and other nutritional information are per serving. They’re approximate and will depend on serving size and exact ingredients used.

I’m sharing my red pepper and carlin pea stew with Lost in Food for #CookBlogShare.