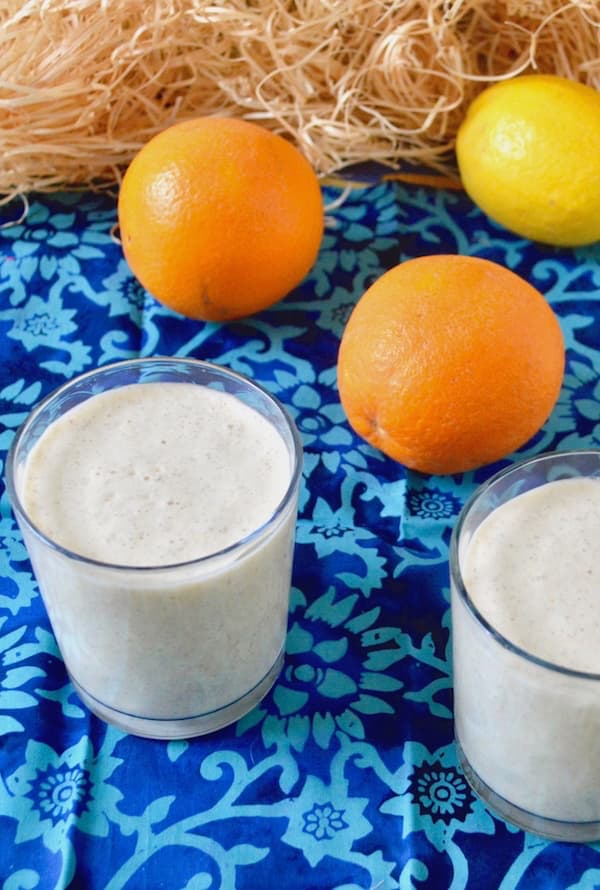 There are few things more exciting than receiving a box of organic fruit and veg in the post when you’re not quite sure what will be in it. I received such a box recently from Delicado48 in Spain. One thing I was pretty certain of was that it would contain oranges and I was not disappointed. A beautifully fresh tasting orange kefir smoothie became our breakfast staple for the next few days.

On opening the large cardboard box, all I could see was a tangle of wood wool. I stuck in a hand and to my surprise I pulled out a mango. I didn’t even know mangos grew in Spain. As I kept diving in and pulling out all sorts of surprises, I felt the wonder of childhood Christmases long ago.

Delicado48 is a grower and distributor of organic Spanish produce. They have been shipping to Germany for some time, but have recently launched a new service to the UK; they have a shiny new website to showcase and sell their produce, although prices are in Euros rather than Sterling. As well a a large variety of fruit and vegetables, they also sell nuts, honey, flour du sel and olive oil.

Everything arrived in good condition, the only casualty was the paper bag which the walnuts were held in. It had split open so I was fossicking in the wood wool and pulling out walnut after walnut with squeals of delight. You may laugh, but it was exciting.

The cherimoya or custard apple was particularly thrilling. CT has waxed lyrical about this Andean fruit ever since I met him, so he was somewhat taken aback when I pulled one out. He wasn’t far wrong.

The fruit was full of large seeds, which made it a little difficult to eat genteelly, but it was ambrosial and tasted something like how I imagine mango custard might. No wonder the Inca nobility were kept supplied by runners, who legged it all the way from the jungle up to the chilly highlands with basketfuls for the delectation of their masters.

I’m a bit iffy about tangerines, but the ones I’ve tried from this organic box so far have been juicy with a perfect balance of acidity and sweetness. The oranges are similarly juicy as well as large, sweet and seedless – perfect for my orange kefir smoothie. Grapefruit and lemons completed the citrus suite.

I also found plums, which I roasted to make a rather fabulous dessert, which I’ll be blogging about later and kiwi fruit which were better than any I’ve managed to buy in a long time.

You can never have too many avocados, so I was delighted to find three nestling in the wood wool, along with a large aubergine, some baby artichokes and a bunch of asparagus – my first of the season.

A very large sweet potato, some plump garlic and a container of olives made up the bounty to be found in my box. I had to quickly learn how to prepare baby artichokes, but I’m so glad I did – they were delicious. I never have problems with cooking asparagus and with the aubergine I made a most delicious warm salad for supper one night with chickpeas and tomatoes.

Thanks for visiting Tin and Thyme. If you make this orange kefir smoothie, I’d love to hear about it in the comments below. And do please rate the recipe. Have you any top tips? Do share photos on social media too and use the hashtag #tinandthyme, so I can spot them.

If you’d like more orange recipes, follow the link and you’ll find I have quite a lot of them. All delicious, of course.

So to my orange kefir smoothie. We’ve been drinking a lot of green smoothies recently so with the arrival of such luscious oranges, I thought it was time for a change.

Last year, I made a grapefruit kefir smoothie, so I knew I wouldn’t end up with a horrid curdled mess. I’m always a bit concerned when I mix citrus and dairy. I noticed recently that Ceri at Natural Kitchen Adventures used a whole orange in her green smoothie. A whole orange, I thought – wow! With my wonderful Optimum 9200A high powered blender, this was certainly a possibility.

I was tempted, but initially didn’t quite have the courage to go for it in my orange kefir smoothie; I thought it might be too bitter. But, I used more than just the juice and zest and the result has been a most delicious breakfast pick-me-up. It wasn’t long before I was brave enough to try some of the peel too. It was absolutely fine, though I found the whole orange a bit too much. I add just a quarter of the peel.

Makes two very large glasses, four medium glasses or eight small glasses.If you don’t have a high powered blender, just squeeze the juice from the orange before adding and omit the rind.Please note: calories and other nutritional information are per serving. They’re approximate and will depend on exact ingredients used.

I use the Optimum 9200A for smoothies, spreads, sauces and even chocolate making. The post contains affiliate links. Buying through a link will not cost you any more, but I will get a small commission. This helps keep Tin and Thyme blithe and blogging. Opinions are, as always, my own.