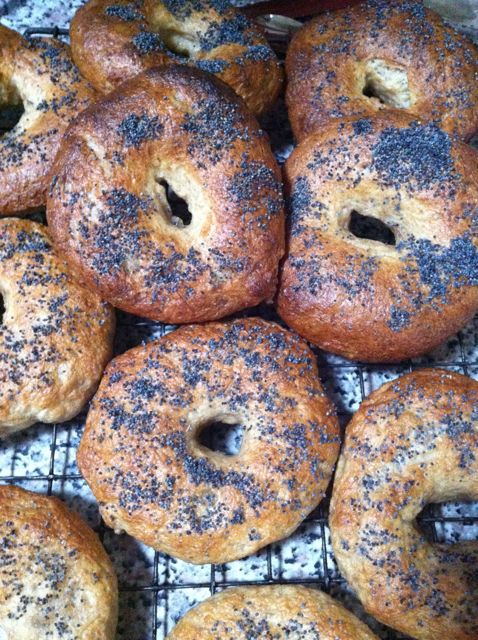 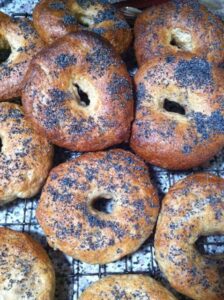 It is very hard to beat a good bagel; it’s even harder to find a good bagel. Having been on my list of things to try for many years, I finally got spurred into action by A Little Bit of Heaven on a Plate, who put a picture on Facebook and stated they really weren’t that hard. And she was absolutely right, they really aren’t that hard to make. The difficulty comes in forming them into a good bagel shape, but I guess that might come with practice. As Dan’s recipe in Short and Sweet was titled simple bagels*, that is the one I went for. I made a few changes of course. I used fresh yeast (1oz), only 1 tsp salt, substituted 100g of the flour for wholemeal and used a wooden spoon rather than a finger to make the hole in the middle.

I was just a little bit chuffed with the result. Not perfect in shape by any means, but they tasted fantastic and were much closer to the taste and texture of the bagels I’ve eaten both in New York and California. 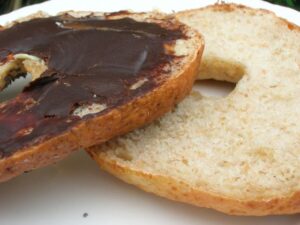 As I said before, bagels are wonderful things and they lend themselves well to both savoury and sweet toppings. I have never, until now though tried them with chocolate spread. I tried one half with Atkins and Potts milk chocolate spread and the other half with the dark chocolate and gosh they were good! So now I realise there is only one thing for it, I must make my own chocolate spread.

This must have hit the zeitgeist, because I’ve never had so many comments on a Facebook post as these bagels generated.

* The recipe I’ve linked to is different from the book in terms of quantities and I prefer the latter which uses less sugar, salt and yeast.

As I’ve had my eye on Dan’s recipe for a very long time, I am submitting this to Bookmarked Recipes with Jac of Tinned Tomatoes.