If you like the flavour of lime, you’ll love these lime biscuits. They’re crisp rather than chewy and wow, you can taste that lime. Chocolate chips are an optional extra, but they work quite nicely. 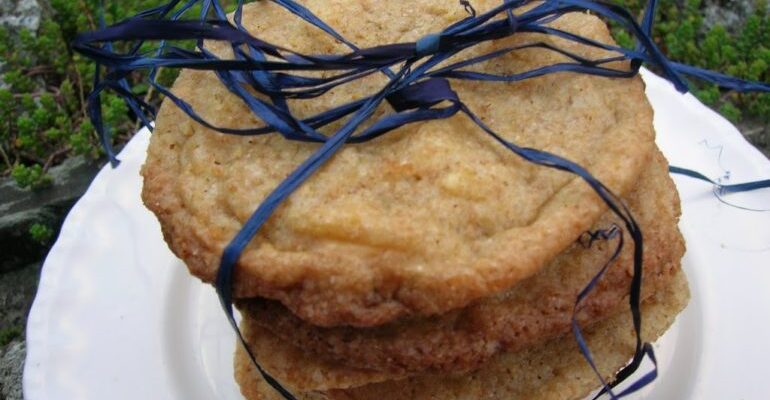 A while back, I won a book voucher from the wonderful Dom over at Belleau Kitchen. It took me a while to make a decision, but I finally bought a copy of Delia’s Cakes. It’s a rather sober choice for me, but I’ve never really had any dealings with Delia, so I thought I’d give her book a try.

It’s very nicely laid out with cool pastel colours (also not my usual style) and clear, rather plain photographs. She also gives instructions as to which part of the oven to place the bakes in. This is an essential but often overlooked part of baking, but rarely do recipe books mention it – big bonus point.

There are lots of recipes I’m keen to try but I started out with one fairly standard recipe and one that was a little more unusual. Both were citrus recipes and as I still have several limes to use up I made a citrussy swap.

The Cow Lady and Gingham Chicken were hosting a cake and coffee morning for Red Nose Day at their shop Jelly Pebbles. I was unable to attend (chocolate course!), but did manage to get a cake baked for the occasion. Lemon drizzle always seems to go down well and I thought Delia was bound to have a recipe for this classic which I wanted to convert into a lime drizzle. She did and so I did.

A couple of friends were acting in an am-dram production of Calendar Girls so I thought they might like a box of biscuits as a nice post performance pick-me-up. Again I turned to my new book and spotted a recipe for chocolate orange biscuits that Delia seemed quite keen on. With all my recent chocolate and lime experience, chocolate key lime pie, ginger and lime cake, lime and coconut loaf I couldn’t see why the combination wouldn’t work in biscuit form.

The flavour of the biscuits was just what I was hoping for. The lime was present, but not in the least overpowering and it complimented the chocolate nicely. Sadly, the rest didn’t go so well – the biscuits spread in the manner of pancakes and ended up about 2 mm in thickness rather than the desired 1 cm. As a result they were overdone. Even those I cooked for ten minutes were crisper than were comfortable to eat.

So as these biscuits have a habit of spreading, it’s a good idea to leave them in a cool place to firm up for thirty minutes or so before you pop them into the oven.

I took the best of the bunch, placed them carefully in a box, tied them up with ribbons and hoped for the best. Whether they were just being polite or trying out their acting skills, I’m not sure, but our friends expressed their appreciation in very positive terms – darling they were simply marvellous 😉

I didn’t get to try the lime drizzle loaf. But I reckoned that the absence of cake at the end of the day is usually a good sign.

Thanks for visiting Tin and Thyme. I’d like to wish a Happy St Patrick’s Day to all Irish readers as I’ve just noticed today’s date. If you make these lime biscuits, with or without the chocolate chips, I’d love to hear about it in the comments below. Do share photos on social media too and use the hashtag #tinandthyme, so I can spot them.

If you like the flavour of lime, you'll love these biscuits. They're crisp rather than chewy and wow, you can taste that lime. Chocolate chips are an optional extra, but they work quite nicely.
Prep Time30 mins
Cook Time12 mins
Total Time42 mins
Course: Afternoon Tea, Snack
Cuisine: British
Keyword: biscuits, chocolate, cookies, lime
Servings: 30 biscuits
Calories: 97kcal
Author: Choclette @ Tin and Thyme

These biscuits have a habit of spreading, so it's a good idea to leave them in a cool place to firm up for thirty minutes or so before you pop them into the oven.Please note: calories and other nutritional information are per serving. They're approximate and will depend on serving size and exact ingredients used.

I was trying to use up the last of my limes before they went off. So I’m entering these chocolate lime biscuits into Credit Crunch Munch, which is hosted by Camilla of Fab Food for All.