Luxurious chocolate chip mousse made with raw eggs, sugar, cream and chocolate. The chocolate chips give it an interesting, but pleasant texture and it’s not overly sweet. Perfect for dinner parties and entertaining. 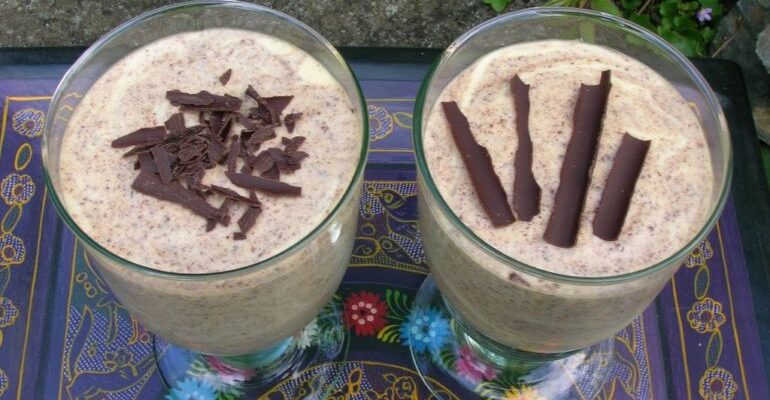 After having failed in my attempts to persuade Green & Black’s to give me a copy of their new chocolate cookbook, Ultimate, to review, I took the hump and refused to buy it. Luckily, CT realised the error of my ways and bought it for me for my birthday. As I’ve only had it a few days, it’s my current favourite chocolate cookbook and sits in pride of place on my bedside table.

So, with Dom’s Random Recipes challenge this month to draw something from your favourite cookbook, this is the one it had to be. CT did the usual honours, closed his eyes and opened the book at Marbled Mousse. Oh no, mousse!

Although I love the taste and texture of mousse, I’m always rather wary of making it due to the raw eggs. Hey ho, it’s what Dom had decreed; so despite a temptation to cheat and get CT to alight on a different recipe, my Honest John persona came to the fore. Dom, please note my halo here! As there were only two of us, I halved the quantities given in the recipe.

The original recipe is for a marbled mousse. In other words a white chocolate mousse and a dark chocolate one swirled together. This sounds nice, but is quite hard to achieve. When the melted chocolate hits the cold cream mixture, the chocolate starts to reform. So chocolate chip mousse it is.

Despite my qualms about raw eggs, the mousse tasted fantastic. In fact I’d completely forgotten I’d even been worried. It tasted so good.

It had a real air of luxury about it. Not too sweet and with an unexpected (and unintended!) but perfectly pleasant texture. It’s perhaps not the airiest of mousses due to the double cream, but it’s much lighter than say a fool or even a syllabub.

The amount given in the recipe will easily fill four modest wine glasses. I foolishly spooned it into three large glasses. This was a mistake. On reflection, four glasses would’ve been a better bet and stopped us being so greedy. The chocolate chip mousse would have lasted us two days. As it was, once we’d polished off a glass each, there didn’t seem much point hanging on to just one lone pudding. We both discovered we were scraping our spoons around the glass to get the last vestiges into our mouths. That must surely be a good sign.

If you have trouble melting the white chocolate, then once you’ve whisked the yolks and sugar, remove half of the mixture and whisk in the soft chocolate to the remainder. You’ll then need to divide the cream and egg whites and add it separately to the white chocolate mixture.

Is it just me or is it Green & Black’s white chocolate that refuses to melt properly? It goes soft, but never seems to actually melt.

If you are not into washing up, this is not a dessert to take on lightly. I used five bowls to make this mousse, six if you include the one on my scales and a saucepan. The process would have been somewhat simpler if the white chocolate had melted as I wouldn’t have needed to divide the mixture until after I’d added the cream and egg whites.

The good news is, the mousse can be made in advance, if you’re entertaining. It will keep in the fridge for 24 hours.

Thanks for visiting Tin and Thyme. If you try this recipe for chocolate chip mousse swirled with white chocolate, I’d love to hear how you got on in the comments below. Do share photos on your preferred social media site and use the hashtag #tinandthyme, so I can spot them.

If you have trouble melting the white chocolate, then once you've whisked the yolks and sugar, remove half of the mixture and whisk in the soft chocolate to the remainder. Green & Black's never seems to work for me. It goes soft, but doesn't actually melt.You'll then need to divide the cream and egg whites and add it separately to the white chocolate mixture.
Tried this recipe?Please take a photo and mention @choclette8 or tag #tinandthyme on Instagram, Twitter or Facebook.
Previous Post: « Halva Flapjacks with White Chocolate
Next Post: Apricot and Cardamom Curd »