Two soft and smooth moist light chocolate sponges sandwiched with a mix of marmalade and cream. This delicious marmalade cream cake is ideal for either afternoon tea or dessert. 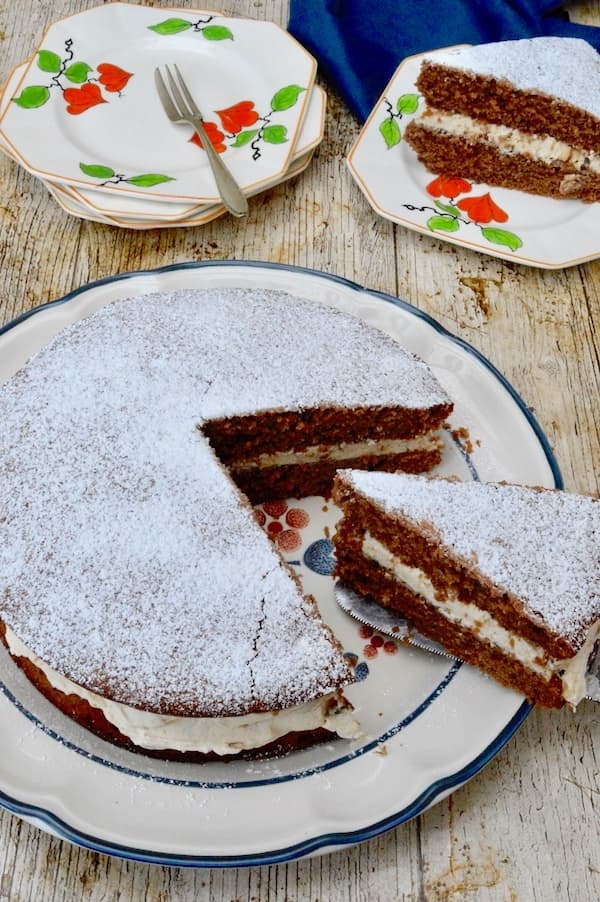 I’ve sadly neglected our public library in recent years and of course now they are threatened, I’m keen to save them. The “save our libraries” day a few Saturdays ago, kick started me into action and I staggered down the street with a pile of really good books.

I’ve heard a lot about marmalade cakes, but for some reason or another the concept has not appealed and I have never, until now, used marmalade in my baking. However, when I saw a recipe for One-Mix Chocolate Sponge in my recently borrowed cookbook, something about the marmalade cream caught my fancy.

I knew I wouldn’t be able to do a one-mix method, because unless we have a really hot spell my butter is never soft enough. So as is my wont, I went my own way with Christine’s recipe.

I used a mix of buckwheat flour and wholemeal spelt. Buckwheat gives a lovely soft texture to cakes, though it doesn’t work terribly well on it’s own. My mother is a stellar seville  marmalade maker, so I always have a jar or two of her marmalade in the cupboard.

A medium to thick cut marmalade works best in this cake. This is because it’s nice to have some chunky bits to chop into the actual cake. I use the thickest strands for this, leaving the finer pieces for the marmalade cream filling. But this is all personal preference and if you prefer a fine cut marmalade, use that.

I make this marmalade cream cake in ounces as it just seems to pan out better that way. But I’ve given the recipe in grams as well as ounces for those of you that prefer metric.

The cake was a little flat as the moulds were too large for the amount of mixture I had, but I’m pleased to report that this cake is very nice.  It has a lovely moist, smooth soft spongy texture and the marmalade cream is a revelation.

The bitterness of the marmalade is a good contrast to the sweetness of the cake, which isn’t actually as sweet as I thought it would have been with all that golden syrup in it.

My particularly light chocolate version may partially be due to the fact that I had run out of my usual Green & Blacks cocoa. I had to do an emergency dash to our local shop which only supplies Bournville cocoa. This is much paler in colour and lacks the full bodied flavour of Green & Black’s.

This cake completely won me over to the use of marmalade in baking. And I’ve subsequently used it a few times, including this full on chocolate marmalade cake.

Thanks for visiting Tin and Thyme. If you make this marmalade cream cake, I’d love to hear about it in the comments below. And do please rate the recipe. Have you any top tips? Do share photos on social media too and use the hashtag #tinandthyme, so I can spot them.

If you’d like more marmalade cake recipes, follow the link and you’ll find I have a few of them. All delicious, of course.