This recipe really is for the best chilli sauce you will ever taste. It’s a medium hot ketchup style chilli sauce, but is packed with flavour. It can be used as an ingredient in recipes, but is at its best drizzled over the top of eggs, tomato dishes or spread into a cheese or tofu sandwich. 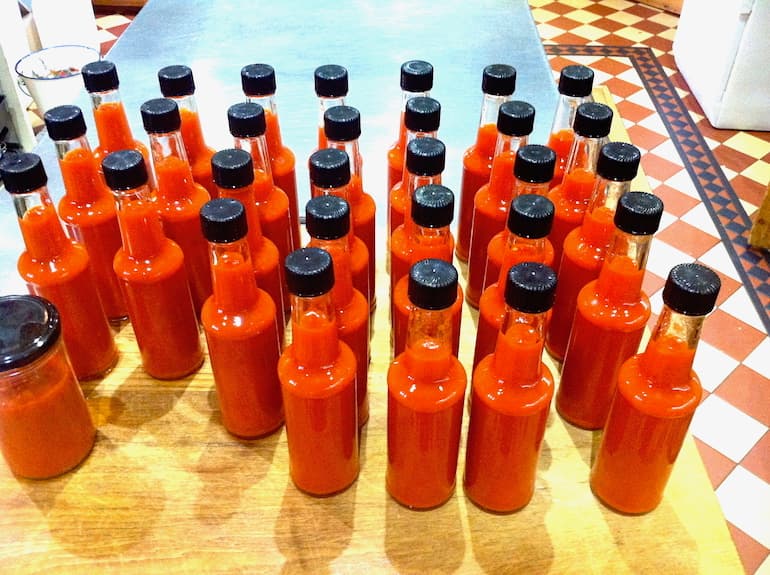 I know, I know. What’s this got to do with chocolate I hear you ask? Well to be honest very little, other than chilli and chocolate come from the same part of the world and as Kath The Ordinary Cook pointed out, they do go very well together.

I was recently asked for my homemade chilli sauce recipe and as it’s one of my own and very dear to my heart I have decided to go against my own rules and put it on my chocolate blog (as was). Read on to find out how to make the best chilli sauce you will ever taste.

We grow Alberto’s Locoto which are hardier than most chillies and we grow them outdoors. The pepper is one of the oldest domesticated chillies. It originates in the Andes and is known variously as the tree chilli, apple pepper, rocoto and manzano; its scientific name is Capsicum pubescens.

It’s particularly good for making chilli sauce as the fruits are large and thick fleshed. These peppers have a lot of flavour and have more of a warming quality rather than a burning one. That said, I stuffed them with chocolate and cream cheese once before cooking in the foolish belief that the cream cheese would cool them down. It didn’t have quite the desired effect.

Unfortunately we didn’t manage to get our Alberto’s locoto ripe this year so we picked them green and have been waiting for them to ripen in our not so warm house. Today was the day we could wait no longer and luckily many of them were nice and red.

CT is just a little bit obsessed with the Lost Crops of the Incas. I’ve tried many an unusual vegetable and fruit since I met him. Apart from this locoto chilli, oca is a root we eat quite often. Here’s a recipe for chilli roasted oca, just in case you ever get your hands on some. And here’s another for vegan oca peanut stew with kale.

My chief taster helped out a bit with this chilli sauce, he got the fun job of deseeding all the chillies! Once that job is done, the rest is pretty straightforward. It’s mostly a case of adding everything to the pan, boiling it up and then blending.

You can make this sauce milder by using more red peppers and less chillies. The red peppers give the sauce a wonderful colour and help to flavour it.

The quantities I use make for a light ketchup type consistency. But you can make it thicker or runnier by adding more or less arrowroot. I’ve also made a runnier version of this sauce using our yellow Fatalii chillies and yellow sweet peppers. It worked well but was very very hot, so we only use it for cooking.

My tongue is now burning from tasting the sauce. It’s not the hottest sauce in the world, but you generally don’t need a great deal of it! In my humble opinion, this is the best chilli sauce ever – good and hot, but also flavoursome.

How Long Will Chilli Sauce Last?

If you want your chilli sauce to keep well, it’s important that you use sterilised glass bottles to store it in. I have a handy post on how to sterilise glass jars, bottles and associated lids if you need it.

But in addition to this, you will need to give your filled bottles a hot water bath treatment. Here’s why. Unlike pickles and chutneys which have masses of vinegar to preserve them or jams where sugar does a similar job, there’s not enough acidity or sugar in this chilli sauce to prevent the proliferation of bacteria. So unless you heat treat the sauce once it’s cooked, harmful spoilage bacteria are likely to get established.

Store your chilli sauce in a cool dark place and it should last for a year. If you notice any sign of mould though, discard. Once you’ve opened the bottle, keep it in the fridge, where it should be good to go for a few weeks.

Don’t fill your bottles to the very top. You need to leave a gap of about two and a half centimetres (one inch). This is because the sauce will expand as it heats up and it would be a shame to waste any of the chilli sauce you’ve just laboured over.

As soon as you’ve bottled the hot chilli sauce, screw the lids on, but only loosely. Air is pushed out as the sauce expands and it needs somewhere to go. Place the bottles in a large saucepan then fill it with warm water to at least three quarters the height of the bottles. But do make sure you don’t submerge them as the lids aren’t properly closed and you don’t want water getting into the sauce.

Bring the pan of water to the boil, then keep it at a rolling boil for twenty minutes. Be careful not to let the water boil too vigorously or again, you may get water in your sauce.

Take the bottles out as soon as the twenty minutes are up and tighten the lids with a cloth so that you don’t burn your hands. Leave to dry and cool before storing.

The quantities given make six to eight bottles depending on size. The photographs are for a much larger batch I recently made with a friend.

Thanks for visiting Tin and Thyme. If you make this best ever chilli sauce, I’d love to hear about it in the comments below. And do please rate the recipe. Have you any top tips? Do share photos on your preferred social media site and use the hashtag #tinandthyme, so I can spot them.

And for more sauce recipes, follow the link and you’ll find I have quite a lot of them. All delicious, of course.

The Best Chilli Sauce You Will Ever Taste – The Recipe

Makes 8 x 150 ml bottles.Stored in a cool dark place, this should last for at least a year, but keep in fridge once opened.Please note: calories and other nutritional information are per bottle. They’re approximate and will depend on serving size and exact ingredients used.