Yes, spring has most definitely sprung. It’s been a long time coming. Soups may not be on the top of everyone’s list of things to eat as they bathe in the sunshine today, but the night’s are still chilly and a good bowl of soup is satisfying at almost any time of the year. Ribollita is a hearty vegan Tuscan soup made from cannellini beans, stale bread and kale. It may not sound that appetising, but it’s delicious.

END_OF_DOCUMENT_TOKEN_TO_BE_REPLACED 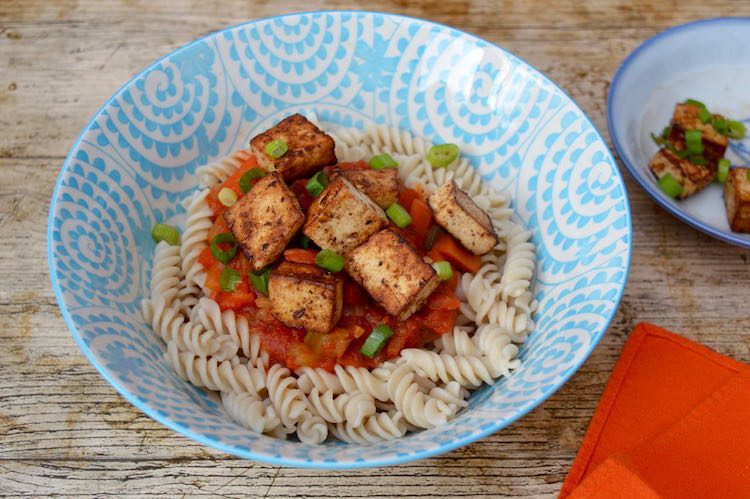 An easy to make anytime pasta with a vegetable packed tomato sauce, using whatever vegetables you have to hand. Jazzed up here with some miso marinated tofu to make a completely vegan meal. You could of course use grated cheese instead.

END_OF_DOCUMENT_TOKEN_TO_BE_REPLACED

Let’s Go Romanesco! Pimp up your pasta and have a fabulous weeknight meal that takes no time at all, but feels a little bit special. This seasonal easy romanesco pasta dish is a taste sensation. It’s quick and simple to make and is eminently suitable for vegans.

END_OF_DOCUMENT_TOKEN_TO_BE_REPLACED

Quick and Easy Pasta for an Italian Feast 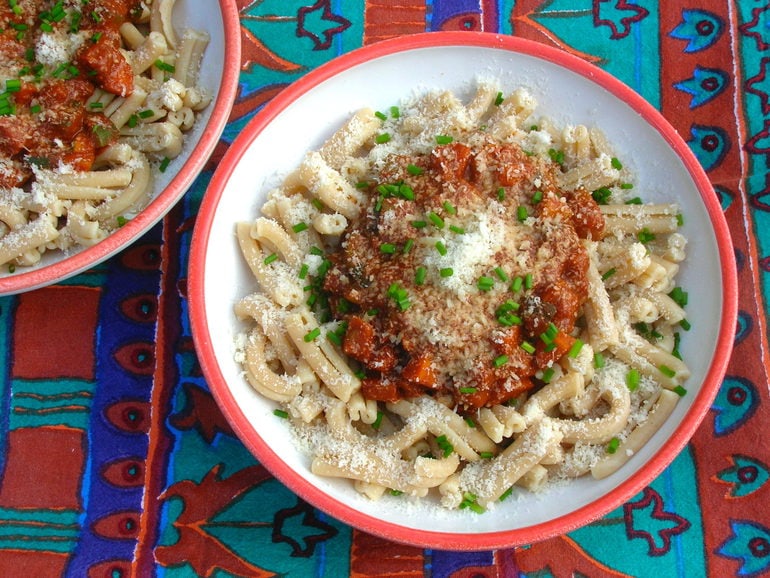 Fast food the Italian way. There’s nothing wrong with a bag of dried pasta and a jar of tomato sauce for a quick and easy pasta dish for supper. But it’s probably a good thing to get a bit of fresh veg in too. Oh! And wham up the umami notes with a little dark chocolate.

END_OF_DOCUMENT_TOKEN_TO_BE_REPLACED

Having mentioned the C word in my last post, I am fully committed to it now. In a bid to try and remember what Christmas is all about and to get away from the avid commercialism associated with it, Vanessa Kimbell has created a thought provoking Let’s Make Christmas event. The idea is to inspire people to make their own Christmas gifts this year – or at least some of them. As I’ve always tried to make a few of my own each year, I heartily approved of this sentiment. Then Vanessa came up with a second Let’s Make Christmas event which I was also keen to participate in. She is  hosting a food blogger gift swap – in Fortnum and Masons no less. I haven’t been to this shop in many many a long year, but it still lives on in my memory as a perfect Aladdin’s cave of foodie delights. I really didn’t want to miss out on this one.

But oh what to make, what to make? It needed to be something light, that would travel well and could be made well in advance. My first thought was biscotti, as the ones I made last year were so good. On reflection though, I thought this wasn’t very original so contemplated making these chocolate oranges instead. But, having mulled that over, I rejected it, mostly because the only organic oranges I could find were thin skinned and your really need thick skinned pithy oranges for this. Hmmmmm, various biscuits, brownies, tiffin, truffles all came to mind. Then I was sent a copy of Cox Cookies & Cake to review. The review will follow in a later post, but one of the recipes that leapt straight out of the page was this one – oh well back to the biscotti idea after all. But pumpkin biscotti! Surely not many others will be doing that. And we did manage to grow quite a few large pumpkins this year, which nicely tied into my seasonal theme. Having been inspired by Karen’s mixed spice over at Lavender & Lovage, I was keen to make my own for this recipe. The only missing ingredient was chocolate, but chocolate dipped biscotti can only be a good thing, surely?

Something this special required a freshly ground spice mix. I often make my own mixed spice for baking and this was one of those times.

So here you have my first batch of pumpkin biscotti. I shall make some more for the big do in London nearer the time. I halved the recipe, although the mixture was so wet (probably because I added more pumpkin than I should have) I had to add quite a few spoonfuls of additional flour to the mix, so this is really quite a bit more than half. Here’s how I did it:

Nutty, spicy and delicious, I thought these had the necessary star quality to travel with me to London. I was particularly pleased with the spice mix, which was so much more aromatic for being freshly ground. These were not overly sweet as evinced by CT’s first comment on biting into a piece, “mmmm, tastes like a sausage” – great! However, once covered in chocolate, no more mention was made of sausages, just pleasant grunts of satisfaction were evinced. The only thing I would do differently is to make much smaller pieces – I had to find a very tall jar for these to fit in.

As soon as I saw the post about biscotti over at Fig and Lime Coridal, it was only a matter of time until I had a go at making some myself. I had made some really good chocolate biscotti a few years ago, but having lost the recipe, it went off my radar.  However, once reminded, it was a dead cert. These were on my list for Christmas gifts.