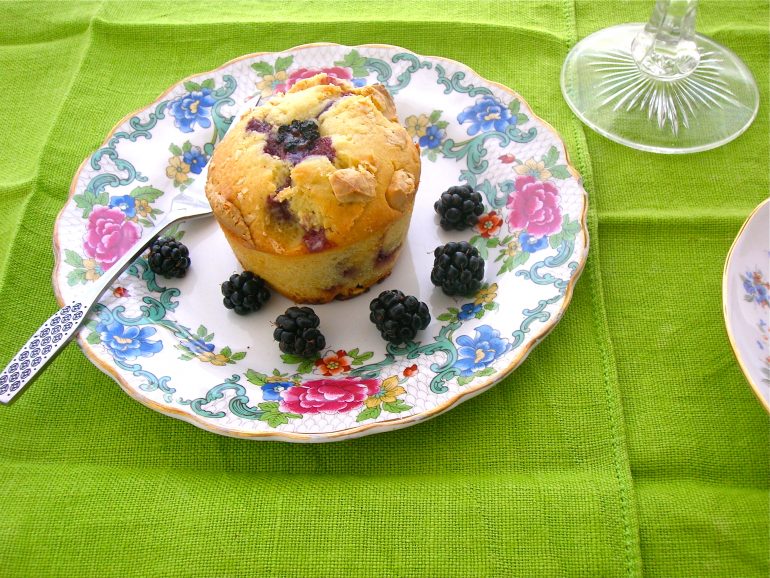 When I was leafing through Chantal Coady’s book Rococo: mastering the art of chocolate a few weeks ago, I was struck by her recipe for White Chocolate Heartbreakers. These are white chocolate cakes served warm with a molten raspberry and white chocolate middle – rather like a chocolate fondant.

I bookmarked it straight away as I thought it would be an excellent dessert for the upcoming blackberry season. Who wouldn’t want a surprise purple melting middle?

This was the first time I’ve made a recipe from this book. Annoyingly it was not watertight; the quantities used were inconsistent and some of the methodology didn’t make sense. In fact, I suspect the book suffers from being poorly edited, which is a shame as it’s a marvellous book with lots of fabulous recipe ideas.

Luckily I know a thing or two about baking, so adapting the recipe and making these blackberry lava cakes wasn’t too much of an issue.

Before I start I must warn you that this recipe uses an awful lot of white chocolate and I only used half the amount given in the original. I ended up with 25g of stray chocolate that was unaccounted for, but as I’d already cut it up, I incorporated it anyway.

I had an inkling that the white chocolate would caramelise at the base, which it did. So I put the stray chocolate on the top of the cakes, hoping it would do the same, which it did. I made the full quantity of the surprise centre as I had designs on it for another recipe – my chocolate blackberry cake. I made the blackberry melt centre the night before in order to allow the mixture to freeze, except it didn’t.

As you can tell, not everything went according to plan and I have quite a few quibbles with Chantal’s recipe. The ganache didn’t freeze for a start, so it was difficult to remove it from the ice-cube tray.

The result, however, was fabulous and these little puds are a decadent and delicious dessert I’d be happy to serve up at any dinner party.

As envisaged, the white chocolate base and top caramelised giving another layer of flavour and texture to these gorgeous volcano cakes. The blackberry ganache was a star, even though it erupted all over the cakes and didn’t come out as a neat melting pool of purpleness in the middle. Blackberry and white chocolate lava cakes would be a more appropriate name and the one I have in fact used.

Do let me know how successful your melts are. And if you have any top tips, please share them.

Thanks for visiting Tin and Thyme. If you make these blackberry lava cakes, I’d love to hear about it in the comments below. And do please rate it. Do share photos on social media too and use the hashtag #tinandthyme, so I can spot them.

If you’d like more pudding recipes, follow the link and you’ll find I have quite a lot of them. All delicious, of course.

Serve warm with fresh blackberries if possible.Please note: calories and other nutritional information are per serving. They’re approximate and will depend on exact ingredients used.

I’m sending this off to Bookmarked Recipes with Jac over at Tinned Tomatoes.

As purple is the theme for Vegetable Palatte this month, I’m also sending these off to Shaheen  over at Allotment 2 Kitchen.

Anything goes for Treat Petite with Cakeyboi and The Baking Explorer this month and as it’s their first anniversary something special is required. So I’m sharing these blackberry and white chocolate melts with them too.

I’ve rather neglected Bake of the Week recently, so I am sending this off to Casa Costella while I remember.

Likewise, I haven’t entered Recipe of the Week for a while either. So A Mummy Too also benefits from one of these Blackberry Volcano Cakes 😉