Betty’s is famous for it’s tearooms. But did you know they create splendid chocolates too? Here you can find out about Betty’s chocolate otter as well as their 1919 victory bear. 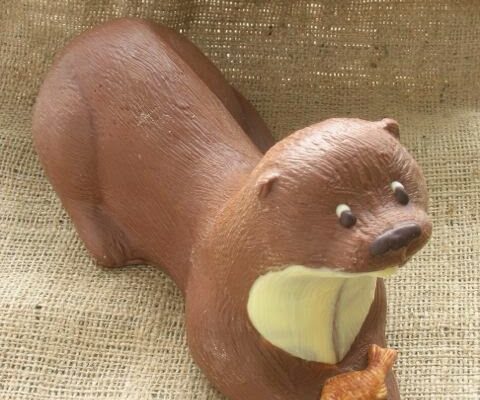 Well, Easter will soon be upon us and what could be more delightful than to receive a cheeky chocolate otter showing off with the fish he’s just caught? I fell in love with him as soon as I saw him on Bettys website. He reminds me of the film Ring of Bright Water which I shed so many tears over as a child; I expect I would again if only I could bring myself to watch it.

An enormous box duly arrived in the post – my otter! He came so well wrapped, it was like pass the parcel. As I peeled back each layer, I kept thinking I had arrived, only to find another one and then another. But it was just as well, it would have been very sad to have spoiled the beauty of this gorgeous beast. A handful of broken chocolate shards in a bag just wouldn’t have cut the mustard.

I so didn’t want to break this lovely creature up and seriously contemplated keeping him for ornamental purposes. But this was a review and I did need to try the chocolate. Now this otter weighs in at a grand 430g so I wasn’t sure quite how thick the chocolate was and how I was going to break into him. After ceasing the rolling pin and putting it down again a few times, I hardened my heart and gave him a bash on the back – oh dear! He wasn’t hard to break. The top half of the otter was thin skinned and he sat on a very thick and solid bottom.

Once broken into, I pulled myself together and grabbed a bit of otter. I’m always rather tentative with milk chocolate, because although it’s my favourite, I appreciate a high cocoa content and don’t like it too sweet. As with the other Bettys products I’ve tried, I was not disappointed. Do have a look at Bettys Dark Chocolate Selection and Bettys Christmas Gugelhupf. The chocolate tasted of chocolate and melted smoothly on the tongue releasing noticeable caramel tones. It was delicious.

An otter isn’t just for Easter you know. Although he’s perfect to eat at any time of year, I feel he has a certain spring like quality. I’m assuming, of course, he is a he – I didn’t check that carefully.  Made by hand from Swiss chocolate with 38% cocoa solids, this beats your average Easter egg hands down. At £20, he isn’t cheap, but quality will out. If you don’t fancy an otter Bettys has plenty of other Easter and spring time treats available via their online shop.

Whilst so many are caught up in football fever, lets not forget another sporting epic which will soon be hitting our very own shores. Yes indeed, the Tour de France kicks off in Yorkshire this year. And as this is only the fourth time the UK has hosted the race, I suspect that Up North they might be even more excited about this than they are about the “Beautiful Game”.

Somewhat surprisingly, as it is a little out of the way, one distinguished Tour de France competitor recently made his way to my door. He was such a charmer, I couldn’t help but let him in. Although he wore a medal proudly around his neck and sported a very jaunty yellow jersey, he didn’t boast of his prowess once during his stay. In fact he watched over us for several days, in a sometimes excited but friendly way. Just to make sure we wouldn’t forget the upcoming race.

Then one day he just disappeared. Actually he disappeared over several days as he was rather large, weighing in at 400g. He was also quite delicious, made as he was from Bettys Swiss very moreish grand cru milk chocolate and coated with sweet luscious marzipan creating the prized maillot jaune or yellow jersey. The coveted yellow jersey has never tasted batter.

It just so happens that the finish line of the first stage is at Harrogate, home of Bettys, the famous tea rooms and chocolatier. Turns out that 1919, the year of their founding, was the year of the first yellow jersey. They just had to create a 1919 Victory Bear to honour that. Wearing hat, riding goggles and a spare inner tube strapped across his chest, he looks the epitome of intrepid, debonair sportsmanship.

The 1919 Victory Bear is joined by a whole host of limited edition cycling treats all with a Bettys twist. Retailing at £29.95 this is a must for any cycling enthusiast or even just those partial to cute chocolate teddy bears.

Betty’s first came to my attention when a work colleague from Yorkshire used to bemoan the fact that you couldn’t get Yorkshire curd tarts in Plymouth. And when I finally got to take a work trip to York, she urged me to go to Betty’s tea rooms so I could try one. How could I resist? They were delicious of course. So good, in fact, that I tried to make a chocolate version of my own. Though I say it myself my Yorkshire curd tarts were pretty good.

Sadly, I didn’t get to try a Betty’s fat rascal whilst I was there. I don’t think I found out about those particular Northern treats until after my trip. Needless to say, I’ve had a go at making Yorkshire fat rascals too.

Thanks for visiting Tin and Thyme. If you try any of Betty’s chocolate, I’d love to hear about it in the comments below. Or you might even be the lucky winner. Do share photos on your preferred social media site and use the hashtag #tinandthyme, so I can spot them.

Bettys have kindly agreed to give one of my readers a milk chocolate otter too. To be in with a chance of winning, please fill in the Gleam widget below. You will need to leave a comment on this post which then gives you additional chances to enter if you so wish. Gleam will pick a winner at random from the entries received. If you are commenting anonymously, please give me some way of identifying you as I will be verifying the validity of entries. Any automated entries will be disqualified. This giveaway is only open to those with a UK postal address. Winners will need to respond within 7 days of being contacted. Failure to do this may result in another winner being picked.

Prizes are offered and provided by Bettys and Chocolate Log Blog accepts no responsibility for the acts or defaults of said third party.

Do take a look at the Chocolate Log Blog giveaway page to see if there is anything else you would like to enter.

Thanks to Bettys for the chocolate otter. There was no requirement to write a positive review and as always all opinions are my own. Thank you for your support of the brands and organisations that help to keep Tin and Thyme blithe and blogging.