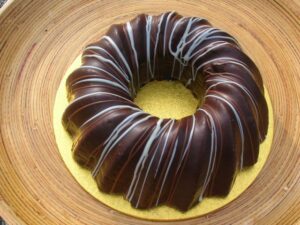 Yorkshire is not a county I know that well, but even in my Cornish backwater I have heard of the famous Bettys tea rooms which first opened its doors in Harrogate in 1919. There are now six branches dotted around Yorkshire. When I knew I was headed to York on a work trip last year, there was one establishment I was determined to visit, no matter what. With only a few minutes to spare before my train departed, I managed to locate the tea rooms, heave a few lingering sighs over the array of delights surrounding me, ask for a Yorkshire curd tart and run. I had heard a lot about Yorkshire curd tart from an expat colleague who was always bemoaning the fact she couldn’t get them down in the South West. After savouring it on the train home, I understood what she had been mithering on about – it really was delicious. I recently had a go at making a chocolate version and although it was very tasty, it didn’t quite have the impact of that first one I tried from Bettys. 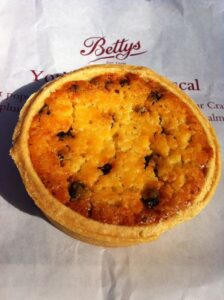 All of this is a rather long winded way of saying that when Betty’s asked if I’d like to review their Christmas Gugelhupf, I was not going to say no.

So whilst I waited for it to be delivered, I had ample opportunity to ponder on what exactly a Gugelhupf was?

Pronounced google-hoopf, it is the precursor to the American bundt type of cake. Originating from Southern Germany, Vienna, Switzerland and Alsace, the Gugelhupf is a fermented ring cake, dusted with sugar or covered in a chocolate glaze and eaten with a cup of coffee. The story goes that the three kings, travelling to or from Bethlehem, stopped off in Alsace. The residents there were so delighted, that they baked a cake in the shape of the the King’s turbans to honour the visit. Today, it is more common to make Gugelhupfs with baking powder rather than yeast and Bettys is one of these.

The cake came well wrapped, in fact within the cardboard box it looked, to all intents and purposes, as though it was wearing a coat of golden chain mail. It was surprisingly heavy for the size (a good sign in my opinion) and when I unwrapped it, I realised why, it weighs in at 730g.

After admiring its luxurious elegance and inhaling the heady chocolatey aroma, the first thing I did was look at the ingredients. I am always concerned that shop bought cakes will have far too many ingredients of which I’m likely to disapprove. I needn’t have worried. Betty’s is a high quality brand and as such doesn’t use junk ingredients. In supporting my case, I happily noted that butter was the first ingredient listed. 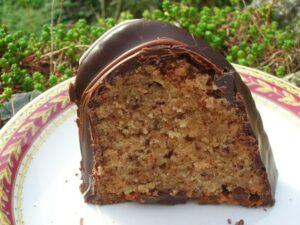 We both really enjoyed this cake and if I had baked one this good, I would have been truly proud. The texture was firm, dense, but moist. The chocolate coating was nice and crunchy and offset the sweetness of the cake, which actually wasn’t overly sweet anyway. Although it was very well finished, it tasted homemade. The flavour, which was chocolate and hazelnut, was excellent. CT waxed even more lyrical than usual. Talking with his mouth full, he offered up these comments: “The chocolate has a smell you can taste before you put it in your mouth – it’s that strong. It tingles on the tongue and has a slightly caramelly Christmas taste and is utterly buttery. I wish I could eat more than a couple of slices, but it’s just too filling.  Loved the hazelnut hit. Can you make one of these for my birthday?”

My mother, who is extremely fussy about cake in general and highly suspicious of bought cake in particular was very impressed. So all in all, I can only say that this cake scored very highly.

If you cant get to a Bettys tea shop, you can take a look at Bettys online shop where you can buy this gugelhupf for £14.95 and any number of other scrumptious delights. Last order dates for Christmas are 19th December for UK mainland, 5 December for EU and 28th November for the rest of the world, which doesn’t give a lot of time.

Giveaway
Betty’s have kindly agreed to give one of my readers a luxury Christmas Gugelhopf too. To be in with a chance of winning, please fill in the Rafflecopter below. You will need to leave a comment on this post which then gives you additional chances to enter if you so wish. Rafflecopter will pick a winner at random from the entries received. If you are commenting anonymously, please give me some way of identifying you as I will be verifying the validity of entries. Any automated entries will be disqualified. This giveaway is only open to those with a UK postal address. Because of the Christmas rush, winners will need to respond within 2 days of being contacted. Failure to do this will result in another winner being picked.

Prizes are offered and provided by Bettys and Chocolate Log Blog accepts no responsibility for the acts or defaults of said third party.
Closing date is Saturday 8 December 2012