Have you ever wanted to try making marshmallows? If so, this cookbook review of Marshmallow Madness by Shauna Sever may be for you. You’ll find all the information you need to make marshmallows and so much more. 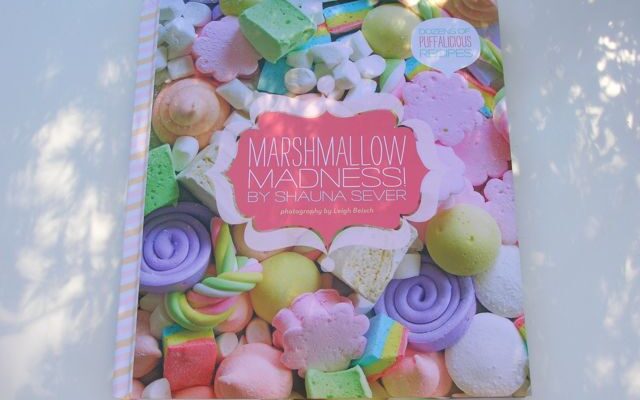 Some time ago I was sent a copy of Marshmallow Madness by Shauna Sever to review. I was quite excited by this as I’ve been wanting to make marshmallows for a long time. But as I’m a vegetarian I needed to find a gelatine alternative and this step proved to be tricky. When I remembered, I wasn’t anywhere that stocked it and when I was somewhere that might stock it, I didn’t remember. Anyway, the long and the short of it is, this review is well overdue.

My first impression when receiving the book was that it was a bit of fun. The cover was pink and fluffy and covered in pastel shades. The cover was also squishy; something that was a little surprising, but also enjoyably tactile and reminiscent of an actual marshmallow. Marshmallow Madness is well illustrated, with enticing pictures appearing on every other page or so. The photographs are particularly interesting as they are not all in one style. Some are practical, some impressionistic and others just mouth watering.

My second impression was that there was a bit more to it. The introductory pages cover a bit about the history of marshmallow, which surprisingly goes back to the Ancient Egyptians who, not so surprisingly, used the marshmallow plant. Ingredients are covered, including alternatives and possible allergies. Alternatives to gelatine were not covered, however, which as a vegetarian I found a bit annoying. Later, I discovered a recipe for vegan marshmallows, but this wasn’t obvious in this rather crucial introductory chapter.

There are a few pages on equipment and if I’d read this bit properly before embarking on my marshmallow making venture, I probably wouldn’t have attempted it. Shauna recommends a sturdy stand mixer, as hand mixers aren’t quite up to the job and also make it more difficult for one person to manage when drizzling in the hot syrup. Guess what sort of mixer I have? The basic method for making marshmallows is covered in detail.

So how do you get a whole book out of a marshmallow you may well ask? Well there’s more to a marshmallows than you might think. There are two main methods for making them, one using egg whites and one using gelatine only. The deeply chocolate marshmallows I wanted to try uses the gelatine only method. You can flavour your marshmallows with just about anything it seems, including fruit purees. I found the idea of blackberry particularly appealing. There is a chapter on the classics, although I’m not sure I’d consider kahlua filled marshmallows a classic. Shauna includes a few additional recipes in which you can use the marshmallows you’ve made. This includes the American classic Graham Crackers.

There are seven chapters in all and pretty much anything anyone could possibly think of relating to marshmallows is covered. How about cocktail inspired marshmallows? Now wouldn’t that have been a good one for last month’s We Should Cocoa? The final chapter is using mallow to make delectable bakes and desserts including the famous American S’mores. The hot chocolate recipes at the end made me want to make marshmallows more than anything else I’d seen on the subject. Serving up a spiced hot chocolate with your own homemade Aztec chocolate marshmallows would make a classy end to a Mexican inspired dinner party – no human sacrifice necessary.

This is an American book so all measurements are in cups and one of the main ingredients used is corn syrup, which is not widely available here in the UK and is also suspect in terms of its high-fructose levels. I substituted golden syrup for this, but honey or other syrups such as maple could be used instead.

My introduction to marshmallow making came in the form of Deeply Chocolate and I was soon deeply out of my depth. It all went horribly wrong for me. But to be fair, I put this down to my lack of competence rather than the recipe. I overcooked the sugar and when I added it to the cooler chocolate syrup, it seized and went into one huge lump. No amount of whisking “mallowed” it and I was petrified I was going to burn out my poor hand held whisk.

I gave up after 15 minutes and poured the contents into the prepared tin and hoped for the best. The hard lump banging against the whisk also meant the liquid went mad and sprayed across my kitchen covering just about everything with specs of dark chocolate goo – not fun to clean up! My result was more like Turkish Delight than marshmallows, but despite being very soft and squidgy, it did taste good.

I don’t want to end on a bad note, however. If I had a stand mixer, I would most certainly be attempting these again and there are a number of recipes in this book I would love to try.

Thanks for visiting Tin and Thyme. If you get hold of Marshmallow Madness or try any of the recipes, I’d love to hear about it in the comments below or via social media. Do share photos on your preferred social media site and use the hashtag #tinandthyme, so I can spot them.