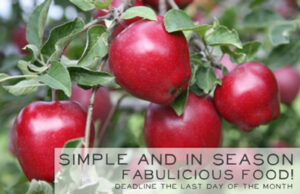 Sweet and spicy with a gorgeous warm orange colour, this is my kind of food and was delicious on a slice of toast this morning. I’m now thinking I might have to make some pumpkin scones to go with it.
I’m linking this to Ren’s Simple and in Season monthly event which she hosts on her fabulous blog Fabulicious Food – I just so love that name.
1
Shares
Share  on Facebook  Share  on Twitter
Tags: cinnamon, ginger, squash