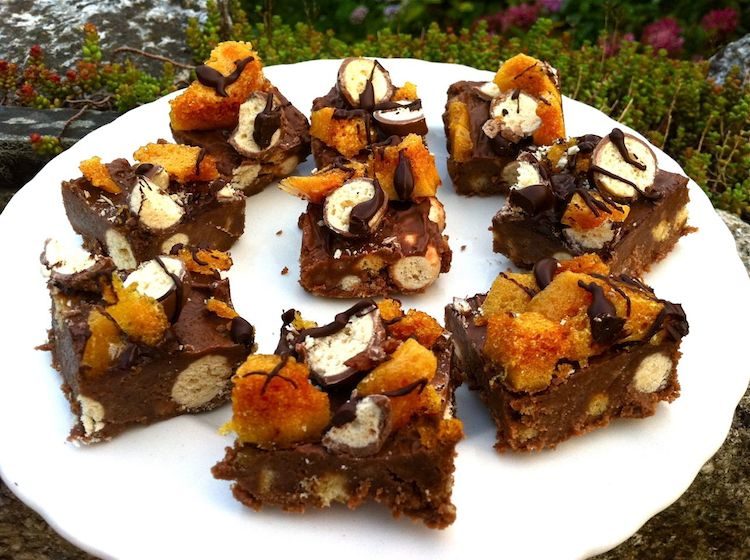 Well, goodness me, there were so many recipes to choose from I was a little overwhelmed. First off, I typed in the keyword chocolate – dozens of recipes issued forth. With a little thought I narrowed my chocolate search down to Eric’s recipes – if I was going to make something from the site, it may as well be one of his. This gave me a more reduced choice. I had no problems selecting which one to make because chocolate honeycomb squares leapt out and grabbed my attention! I’ve sort of had honeycomb on the brain recently. I’ve just reviewed some delicious hokey pokey. Then Chele over at the Chocolate Teapot made some followed by Kath over at the Ordinary Cook. I was just looking for the excuse to make some of my own and now I’d found it. 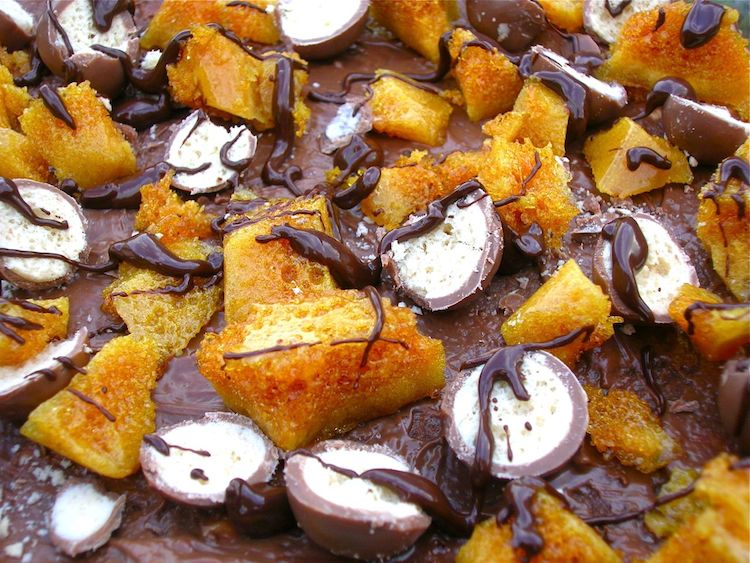 Actually, when looking at the recipe, I realised it used maltesers rather than honeycomb. What the heck, much as I love maltesers, honeycomb it was going to be – or was it? I followed Chele’s recipe and it looked fine when I poured it out – bubbly and the right colour, but when I went to bash it into bits I found it was sticky and chewy and not in the least bit crunchy. Easily defeated I trudged off to buy some maltesers!

I ended up making half the quantity and adjusting the topping decoration somewhat. It’s just as well or we’d have eaten even more of these chocolate honeycomb squares than we did. If, like me, you have a weakness for tiffin, click on the link to find other recipes of mine you might like.

Indulgent is the best word for these chocolate honeycomb squares. They were sweet, crunchy, sticky, coma inducing treats, but so very moreish. They reminded CT of Middle Eastern sweets, not so much in flavour but as sticky flavoursome bites. I was very surprised at how much the orange flavour stood out, given that so little of the dark chocolate actually made it onto the top. 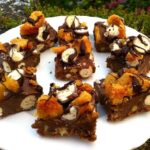 An hour or two's setting time is needed for this recipe.

This post was commissioned by Baking Mad. I was not expected to write a positive review and all opinions are, as always, my own. Thanks to my readers for supporting the brands and organisations that help to keep Tin and Thyme blythe and blogging.