Last weekend my mother turned up with a lovely bunch of rhubarb from her garden. Rhubarb used to flourish on our allotment and we had a big glut every year. Since moving down to our plot on the field, however, rhubarb has persistently refused to grow and I really miss it.

My rhubarb yearning was partially stimulated by a desire to make chocolate meringues. Yes I know the connection isn’t obvious, but I had a grand vision for chocolate and rhubarb pavlovas topped with rhubarb and elderflower curd. For elderflowers are also in season right now.

The mini pavlovas I’d initially envisioned actually ended up being rather large. The grand vision I had didn’t exactly come to pass either. But goodness gracious, the rhubarb pavlovas were scrummy.

The combination of zingy rhubarb curd with chocolate meringues complement each other perfectly. The contrasting textures of smooth and crunchy add to the overall enjoyment. The rhubarb curd is delicious in its own right and I was really pleased with the lovely orange colour it turned into; I was thinking it might just come out as a rather unlovely muddy brown.

Every pavlova needs a good meringue base. I already knew mine was going to be a chocolate one, but could I find a recipe for it anywhere? So, as usual I went my own way with the chocolate meringues. Although dark chocolate coloured meringues would look rather good, I didn’t want the flavour to dominate. So I went for a light touch and used cocoa.

I used arrowroot to stabilise the meringue, but you could use cornflour if you prefer. Arrowroot works in a similar way to cornflour, but it’s said to have beneficial properties. When a recipe calls for cornflour, I invariably use arrowroot instead.

When you’re forming the meringues, indent the middles to resemble nests. This will hold the rhubarb curd. And if you like the speckled look, dust the meringues with cocoa powder before baking. Which, as you can see, is what I did.

If you’d like to have a go at making vegan chocolate meringues, follow my recipe for brown sugar aquafaba meringues. But instead of using brown sugar, use golden caster sugar. You can either use vanilla sugar or add half a teaspoon of vanilla extract. Then add the arrowroot and cocoa powder as described in the meringue recipe below.

One of the things I used to make a lot of was rhubarb curd. So when I got my hands on this rhubarb, I had a sudden yearning to make some again. However, the last time I made it was back in the days when I didn’t even know what a blog was. Never mind a recipe blog. So I couldn’t remember exactly how I made it. But I’m ever resourceful and I’ve made a lot of fruit curds, so I cobbled something together with a little help from Belleau Kitchen. 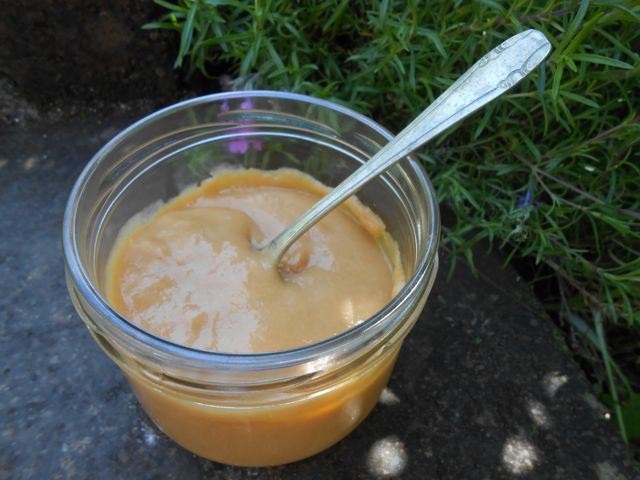 The colour of Dom’s rhubarb curd is spectacular, but I’m guessing he used forced rhubarb. Either that or food colouring. My rhubarb is just regular garden rhubarb, so the resulting colour is orange rather than pink. The taste, however, is sensational.

Next step was to make:

Stewed rhubarb is lovely, but roasting this tart fruit enhances its flavour even further. And to make it even more delicious, try adding a little elderflower cordial before you roast the rhubarb.

Thanks for visiting Tin and Thyme. If you make this recipe for chocolate pavlova or just the rhubarb and elderflower curd, I’d love to hear about it in the comments below. Do share photos on social media too and use the hashtag #tinandthyme, so I can spot them.

Rhubarb and Chocolate Pavlova – The Recipe

I’m sending this recipe for chocolate pavlova to Javelin Warrior’s Made with Love Mondays. Anything submitted must be made entirely from scratch.

As rhubarb is still in season, I’m also entering the roasted rhubarb and rhubarb curd elements into Simple and in Season with Ren Behan.

The rhubarb was home grown, making this summery dessert inexpensive. So it fits in nicely to the Credit Crunch Munch remit with Fab Food 4 All. This month’s event is hosted by Anneli of Delicieux.

The inclusion of elderflower cordial into the rhubarb curd makes the recipe eligible for Herbs on Saturday with Karen over at Lavender and Lovage. I made the it with my own fair hands, using foraged elderflowers after all.

These mini chocolate pavlovas are perfect for al fresco eating in the lovely weather we’re currently experiencing. I am thus submitting these to a new monthly blogging challenge from Delicieux and Chez Foti, Four Seasons Food. This month’s theme is Picnic food and Outdoor Nibbles.

Calendar Cakes is all about jam this month. Luckily, fruit curds are included, so my rhubarb and elderflower curd is winging it’s way to DollyBakes. This challenge is co-hosted by Laura Loves Cakes.

I forgot to check what the letter is for Alpha Bakes this month, but have just done so and fortuitously it is R. So I’m entering my R for a Rhubarb dessert to The More Than Occasional Baker who is hosting this month.