First baked twenty years ago in Byron Bay, these cookies were the first to see the Australian sunrise each morning. Byron Bay being the most easterly point in Australia.  They’ve come along way since the first batch of white choc chunk and macadamia nut cookies and have now migrated to Britain as well as other parts of the world. 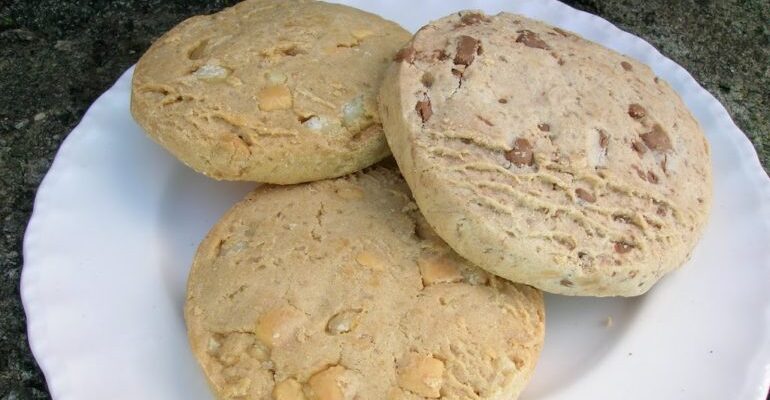 The Byron Bay Cookie Company appear to have a good ethical stance. I was particularly attracted by this as they continually seek to reduce their carbon footprint. They use free range eggs and some fairtrade ingredients. Many of these, such as their flour, oats, eggs, butter and honey, are locally sourced.

A goodly sized box arrived in the post from Beyond the Bean, the main UK distributor for the Byron Bay Cookie Company.  My initial thought was yippee – I always get excited when a parcel arrives in the post. But my first thought after unpacking the  selection of chocolate cookies was, these aren’t ordinary cookies, they’re doorstops – I know size isn’t everything, but these are whoppers.  They were all nearly half an inch thick and weighed in at 60g apiece. One per sitting is enough, unless like me, you are particularly greedy.

Apart from the Triple Choc Fudge, the cookies came individually wrapped. So ideal as a packed lunch treat. Indeed, they would make an excellent walking companion.  Having done some walking around Byron Bay, a couple of these would have been very welcome when hunger pangs set in.  We’ve spent quite a lot of time this week down at the plot harvesting, digging and tidying up, so I know that these biscuits also make good gardening companions.  CT will definitely vouch for that one.

In addition to the biscuits featured below, the pack also included a couple of gluten free cookies, a triple chocolate Dotty and White Choc Chunk & Macadamia. Gluten intolerant cookie lovers will be pleased to know that there is a gluten free version for many in this range.  These tasted particularly creamy, almost like shortbread and had a lovely melt in the mouth feel.  They were however, rather crumbly – one was broken on arrival, the only one that was so, as the others arrived in perfect condition.

The wonderful smell of chocolate wafted upwards as soon as I opened the Triple Choc Fudge packet.  Half biscuit, half cookie they don’t resist the bite, but are just the right side of crumbly.  Unlike some chocolate chip cookies which can be quite sickly, these were not too sweet, but were very chocolatey. The biscuit mixture is liberally studded with chunks of white chocolate, dark chocolate and fudge which provide the majority of the sweetness.

The Milk Choc Chunk was my personal favourite as it has an almost creamy taste and texture with lots of chocolate studded throughout. You can see from the picture above that these are by no means chocolate in name only.

CT’s favourite was the White Choc Chunk & Macadamia Nut, which was the company’s original cookie and I guess has withstood the test of time.  It didn’t last long with us though.  He felt macadamia nuts would make anything delicious, but particularly liked the crunchiness of the nuts contrasted with the creamy chocolate.

Dotty has to be aimed at kids, both little and large. The tops are covered in colourfully coated chocolate beans that make for a fun look. So they’re especially appealing to children. And I’m pleased to report that the colours used in the beans are all natural. The cookie itself is full of milk chocolate chunks. Dotty is sweeter than the others because of the sugar coated beans, but nonetheless tasty.

I really like liked the uneven sizes and shapes of these Byron Bay Cookies. They’re obviously meant to be reminiscent of homemade cookies and I have to say – they are.  Of course, I would now like to try their non-chocolate flavours.

Since I read The Ordinary Cook’s review, I’m keen to get stuck into the sticky date ginger and walnut. It sounds particularly appealing. But then again so does their limited addition strawberries and clotted cream. All in all, I would be more than happy to munch my way through a few more of these cookies. Either in a cafe (which is the primary intended market) or in the great outdoors.

Thanks for visiting Tin and Thyme. If you get to try any Byron Bay Cookies, I’d love to hear about it in the comments below. Do share photos on your preferred social media site and use the hashtag #tinandthyme, so I can spot them.