Home » Reviews » Eating Out, Travel and Events » Travel » Gesundheit Birmingham
Share on Twitter Share on Facebook Share on Pinterest Share on WhatsApp Share on Reddit Share on E-mail
Yo ho ho, all the fun of the festive fair. If you can’t get to Germany for a Christmas market, let the German Christmas market come to you. Well that was my rationale for taking a trip up to Birmingham anyway. The German Christmas Market has become something of an annual attraction in Birminham’s city centre at this time of year. I’d heard the hot chocolates were a must. It was time to sample one or two, do a spot of Christmas shopping and take the opportunity to visit friends in nearby Leamington Spa. 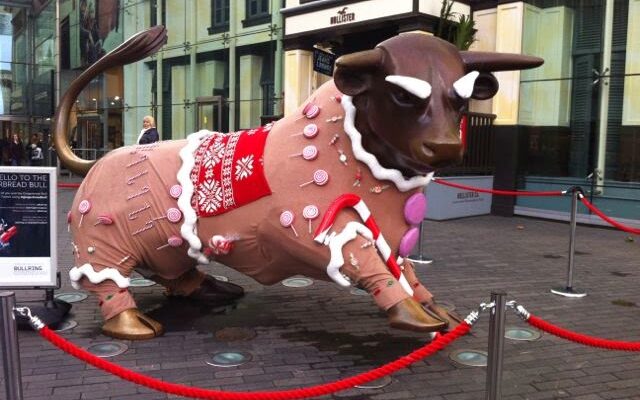 It’s a bit of a long haul up to Birmingham, so I was pleased to find that the hotel I was staying in, was only a three minute walk from the station. In fact the Ibis Birmingham Centre New Street, is very conveniently located, making it ideal for the German Christmas Market as well as many of Birmingham’s other attractions. I’m never quite sure what to expect in city centre hotels, but I was pleasantly surprised. The room was comfortably sized, clean and surprisingly quiet for a hotel in the city centre right next to China Town.

Once divested of my baggage, I took off to find something to eat. I was trying to find a vegetarian restaurant that I’d heard about. Many years ago, when I lived in Leamington Spa, I was quite familiar with the centre of Birmingham, but goodness how things have changed. The place has undergone a transformation and whilst it now looks much smarter, I found it completely disorientating. I quickly gave up on the veggie restaurant and passing a Wagamama, I decided I’d give that a try instead – another new experience for me. The place was absolutely heaving and it was only 5:30 pm. I found myself sitting opposite a local woman who was dining there on her way home from work. We struck up a conversation and ended up not only enjoying our respective meals but the company too. When we’d finished, she very kindly, went out of her way, to take me to the Christmas Market, which I had been unable to find, but was actually only around the corner.

What a splendid way to experience the market: the streets bustling with shoppers and glühwein enthusiasts, the Christmas lights aglow and the jolly strains of Christmas music. It truly felt most festive. I hadn’t expected the market stalls to look just like a German woodcutter’s cottage; this just added to the general charm. All sorts of wares and comestibles were on display including decorations hanging from the stalls, crafts, handmade wooden toys and cakes. But hot chocolate? I couldn’t find a single cup.

Unable to locate my hot chocolate and not having had any pudding, I decided to indulge in a box of large flavoured marshmallows covered in chocolate. Judging by the lengthy queue I had to stand in, these were a much sought after delicacy. A box of 12 cost £6, which, quite frankly, I thought was a bit of a bargain. I decided to reward CT with his very own box.

I passed a comfortable night in the hotel. The mattress was just how I like them, firm yet giving at the same time. My back felt nicely rested and I ambled down to breakfast. I have to admit I wasn’t really looking forward to this bit. I love a good cooked breakfast, but my experience at budget hotels has been disappointing – watery eggs, flavourless tomatoes and not much to tempt us vegetarians. How wrong I was. There was a choice of hot food and everything I had was well cooked and flavoursome. There was also plenty of cereal, yogurt, fruit, pastries, toast, cheese and meats of various kinds. I would have liked to have had some wholemeal bread for toasting, but eating white bread was something of a novelty.

I had until midday to check out, which meant I could look around the market again, unhampered by baggage. In the morning light and without the evening crowds, I was finally able to find that elusive hot chocolate; the Bailey’s and pile of whipped cream at 10 am was perhaps a little decadent, but so worthwhile. I did think the price a little steep: £4.30 + a £3 refundable deposit for quite a diminutive mug. But hey, it was all part of the experience.

As the morning drew on and activity around the market increased, various living statues, buskers and other street entertainment started to appear. It was a very different place from the evening before, but no less enjoyable. Chocolate was what I was there for, so I bought a box of individually chosen chocolates for the friends I was going to be staying with that night. They looked and sounded intriguing, but I have yet to hear any feedback on whether they were any good. Other markets spilled out from the main German market in all directions adding to the bustling festive atmosphere.

Before catching my train to Leamington Spa later in the afternoon, I had a wander around the city centre. I wanted to see the famous new library and I’d also been urged to visit the museum by my previous night’s dining companion. I was impressed by both. The library was thronging with people and I got vertigo on the freestanding escalators which headed forever upwards much like Jacob’s Ladder. At the museum I saw the Staffordshire Hoard – the largest hoard of Anglos-Saxon gold ever found.

My overwhelming impression of Birmingham was just how friendly and helpful everyone was. From the staff at the hotel, to my dining companion to the ticket clark who went out of his way to make sure I got the very best deal and train to Leamington Spa. So if you can’t make it to Munich this year, Britain’s second city won’t disappoint.