Are you feeling in need of inspiration? Do you like trying new recipes? Are you newly vegan or struggling to get more plant based meals into your diet? A Riverford vegan recipe box might be just what you need. Read on to find out what I thought about the one I tried; I also have a box to offer up as a giveaway. 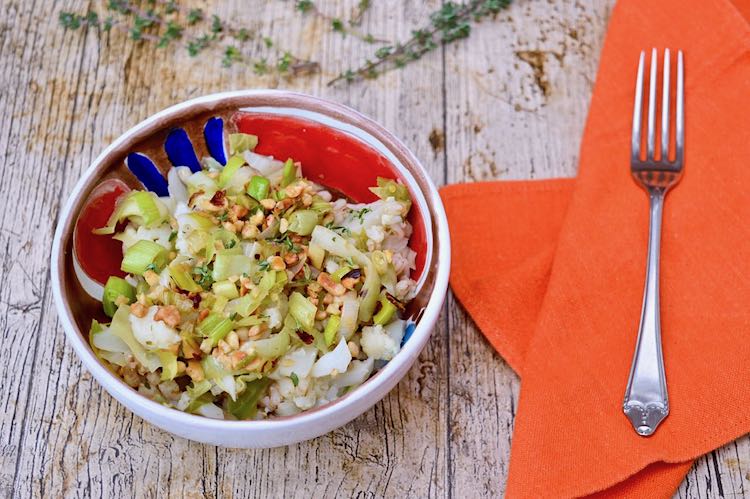 Four weeks in to Veganuary and I’m still really enjoying the challenge. I had a bowl of my easy vegan honey almond granola with a banana and some almond yoghurt for breakfast this morning. It was so good. Once I got my head around it, I haven’t found vegan breakfasts difficult at all. This post for 31 healthy vegan breakfast recipes helped. For lunch I had some of this mushroom, walnut & butter bean pâté. It’s quite addictive and has really improved my packed lunch sandwiches.

For supper we’ll be having a teriyaki rice bowl. I’ve made it twice this Veganuary and I’ll be blogging the recipe in the not too distant future. I haven’t missed cheese, eggs or milk chocolate at all. Who’d have thought it? Butter is the only thing that gives me a bit of a pang. I haven’t found an even half decent replacement for it.

I’ve been eating a wider range of foods and cutting back on my sugar intake. I’ve discovered a few vegan tricks I didn’t know about and CT hasn’t complained once at having a vegan meal for supper every day this month. The Riverford vegan recipe box added an extra shot of interest and deliciousness.

Riverford is probably best known for its organic farms and veg box deliveries. I get a fortnightly veg box and my mother was one of the very first to get a box when they first started up, way back in the nineties. As it happens, they do a lot more than grow and deliver organic vegetables.

They have a bakery, a shop in Totnes, which sells all sorts of organic produce and two award winning restaurants where fresh organic vegetables are the stars of the show. I’ve eaten at Riverford Field Kitchen a couple of times and I’ve been wowed on both occasions. Riverford at the Duke of Cambridge in Islington, London is Britain’s only certified organic pub. CT can attest that the food there is mouth smackingly good.

I’ve tried Riverford’s vegetarian recipe boxes a number of times and I’ve always been impressed. The idea is that you cook from scratch, but get provided with the exact ingredients you need. This takes out a whole level of hassle and makes the process simple and enjoyable.

You can choose recipes from light (low calorie), simple (less than 30 minutes to prep and cook) and foodie (more involved). As just mentioned, all ingredients are provided, along with detailed instructions and photos of the finished dish. The ingredients are, of course, all organic.

This was the first time I’ve had a Riverford vegan recipe box. I awaited its delivery with eager anticipation. I had two recipes to prepare. Each one made a substantial meal for two, plus there was enough leftover for me to have a modest lunch the following day. The photos you can see of the finished dish are both the leftovers that I used for my lunch. The portions are substantially bigger than these show.

Riverford recipe boxes aren’t cheap, but they are of excellent quality. You know the vegetables are fresh and organic and the recipes will be interesting and delicious. My only quibble is the plastic. There’s not a huge amount, but there are little tubs of things like rice, vegan worcestershire sauce and spices. It’s a tricky problem for suppliers. They can’t have produce that spills out over everything else. I know Riverford is trying to reduce its use of plastic, so I’ll watch this space and hope they come up with a better medium.

I thought the sweet potato gumbo recipe was going to be my favourite. I have a penchant for spicy food, so I knew I was going to like it. The sweet potato, red peppers, kidney beans and tomatoes made for a colourful and vibrant bowl. It was easy to prepare and it was delicious, but actually, it’s the sort of dish I often cook at home.

There were a couple of ingredients I haven’t used before: red pesto and vegan worcestershire sauce. So, I’m by no means saying I was disappointed. The gumbo spices and cayenne pepper packed a wonderful punch and the whole thing was extremely moreish. If you don’t like things too hot, you could easily leave out the cayenne pepper or just add a pinch.

When I first saw the recipe for the cauliflower spelt stew with crispy leeks, I have to confess I was a little crestfallen. It was billed as a “light” recipe, which always makes my heart sink. Oh ye of little faith! This was my favourite meal of the two. CT also voted it number one.

It was quite different to the sort of spicy meals I often create, but really delicious. This is one of the reasons why I love Riverford recipe boxes. It’s almost inevitable you’ll make something you’d never have thought of. The meal was filling as well as super tasty and it had the added bonus of being under 500 calories per person.

I picked up a really good tip with this recipe. Toast the pearled spelt before adding the water to it. So simple, but what a difference it makes. The scent of toasting spelt is, I found, quite intoxicating.

I also discovered what a fabulous ingredient sweet white miso is. Miso has a permanent place in my store cupboard and I wouldn’t be without it. I use it mostly for miso soup, but often add it to other recipes too. But sweet white miso is quite different. Yes, it has umami notes, but it’s also fragrant and, as the name suggests, sweet (ish).

The flavours in this recipe are really quite complex. As well as the miso, there’s mustard, garlic, lemon and thyme and they all have a role to play. The cauliflower is added to the spelt 10 minutes or so into the cooking process and finely shredded pointy cabbage added just at the end. The whole thing is topped off with crispy leeks which are cooked with lemon zest, hazelnuts and thyme. Yum!

To mark Veganuary, Riverford is offering one Tin and Thyme reader a Riverford vegan recipe box worth over £20. It consists of two recipes complete with ingredients and instructions. To be in with a chance of winning, please fill in the Gleam widget below. You’ll need to leave a comment on this post, answering the question, which then gives you additional chances to enter if you so wish. Gleam will pick a winner at random from the entries received.

This giveaway is only open to those with a UK postal address. Winners will need to respond within 5 days of being contacted. Failure to do this may result in another winner being picked.

Prizes are offered and provided by Riverford and Tin and Thyme accepts no responsibility for the acts or defaults of said third party. Tin and Thyme reserves the right to cancel or amend the giveaway and these terms and conditions without notice.

Do take a look at the Tin and Thyme giveaways page to see if there’s anything else you’d like to enter.

I was sent a Riverford vegan recipe box to try. I was not expected to write a positive review and all opinions are, as always, my own. Thanks to my readers for supporting the brands and organisations that help to keep Tin and Thyme blithe and blogging.