Recipe for delicious but healthier double choc chip cookies. They’re made with a mix of butter and oil and include a reasonable amount of sugar, rolled oats and some wholemeal flour. It’s a slightly adapted version of soft bake choc cookies from Lorraine Pascale’s A Lighter Way to Bake. You’ll also find a review of the book. 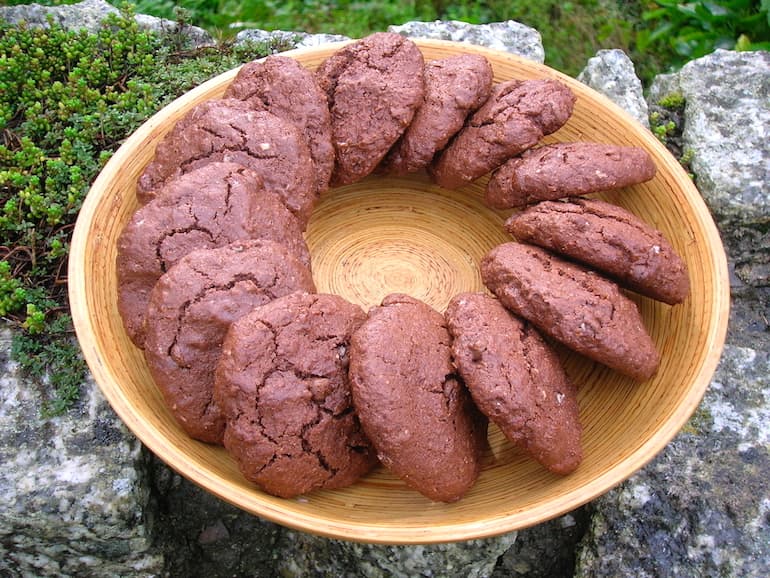 As the title suggests, Lorraine Pascale’s latest baking book, A Lighter Way to Bake, is all about baking in a healthier way. It’s not about cutting out the treats, but reducing the amount of fat, sugar and refined flour in the sort of bakes we are familiar with.

As regular readers will know, I have baked with wholemeal flour all my life, so I was particularly pleased to see a TV chef catching up with the idea. Although I have a sweet tooth, I mostly bake at the lower end of the sugar scale.

But when it comes to fat, I am of the Weston A Price persuasion. That is to say, I don’t actually believe that good quality butter and eggs, where the livestock has free ranged on grass, is bad for you, quite the contrary. See my post on ingredients are the key. Eating too much of it, of course, may well be a problem.

A Lighter Way To Bake

This is one very dense book. Although it’s more or less the same size as Lorraine’s Baking Made Easy and is also published by Harper Collins, it seems to weigh a lot more. It does have 286 pages, which is about fifty more than her previous title, but I don’t think that accounts for it all. I like this feeling of weightiness and solidity in a cookbook, it gives me a sense of security.

Unusually, there is a picture for every bake covered, although not always on the same page. They all look very enticing and don’t have any of the annoying fading out shots, where you can only see part of the picture clearly. There is a particularly intriguing picture of a raspberry, vanilla & white chocolate cake with almond flowers that I am now keen to attempt.

There are also a couple of superflous pictures of the author, which always seems a bit odd in a cookbook. It’s good to have one good picture for interest, but I don’t really see the point of any extras. It does appear to be a modern trend though and I suppose there aren’t that many of them.

Rather strangely, the paper is very shiny, which can make it reflective when the lights are on and thus a bit difficult to read. The choice of print is also a bit odd, or rather the choice of colour. The print size isn’t that big and both the introduction to the recipe and ingredients are printed in pale red: I found myself squinting on more than one occasion.

Thankfully, the instructions are all in black. HarperCollins has chosen red is a key theme and it runs throughout the book. It’s the colour they use on some pages and for most of the utensils.

The recipes all look good and I’d be happy to make or eat most of them. There are a few meat and fish recipes included, which I skipped over fairly fast, but the savoury section had an equal number of vegetarian recipes in it, eight of each, which I found very pleasing.

I bookmarked the butternut squash naked bean burger with apple and mango chilli salsa as soon as I saw it. Being a bit of a squash fiend, I’m also rather keen to try the sweet potato, squash, apple and sage muffins from the breakfast section.

Having watched all the breadstick action recently on the BBC’s Great British Bake Off, the oregano & thyme grissini caught my eye in the bread chapter and I’m looking forward to trying them out next time I have friends around for a meal.

Lorraine has gone for healthy, but has made an effort that this should not be at the expense of taste. She has not cut out butter entirely, but often substitutes it, in total or in part, by oil or yoghurt. Ground almonds and wholemeal flour feature quite strongly and there is more emphasis on fresh fruit rather than dried.

Many of the recipes use only egg white or have a ratio of more egg white to yolk to omit some calories; what, I wonder, do you then do with all the egg yolks? I can’t bear waste, but it rather defeats the object of not eating them in the first place if you then make a massive amount of curd or custard.

Each recipe has a nutritional breakdown at the bottom of the page and gives a comparison to a more conventional recipe, although I have no idea which recipes those are. One of the almond blackberry and peach friands, for example, are 179 calories compared to 270. They also have 9.8g less fat, 5.5g less saturated fat, 4.4g less sugar, 0.1g more protein and 1g less salt.

There were plenty of chocolate recipes to choose from, which is most definitely a good sign. The chocolate Guinness and blackcurrant cake is a must as is the chocolate, chocolate torte. But first, I decided to try out the soft bake choc cookies.

The only change I made to these was to use rapeseed oil rather than olive oil and a slightly higher quantity of wholemeal flour as my duck eggs were quite large. Well yes, there are the duck eggs too, I suppose.

The recipe said to divide the mixture into twelve, but I made sixteen large biscuits out of it.

The double choc chip cookies turned out beautifully and were quite large. They didn’t spread too much, but rose up quite considerably. Warm from the oven, they were crisp on the outside and soft and slightly chewy on the inside.

When they cooled down, they were soft on the outside too. Lorraine describes them as half way between a biscuit and a cake and I think she has that spot on. A whoopie pie by any other name. They were just the right side of sweetness, not overly sugared allowing for the chocolate to shine resulting in a really flavoursome biscuit.

Thanks for visiting Tin and Thyme. If you make these soft bake double choc chip cookies, I’d love to hear about it in the comments below. And do please rate the recipe. Have you any top tips? Do share photos on social media too and use the hashtag #tinandthyme, so I can spot them.

These cookies are soft ones. If you prefer them a little firmer bake for an extra 2-3 minutes.
Please note: calories and other nutritional information are per serving. They’re approximate and will depend on serving size and exact ingredients used.

The publishers, HarperCollins, are offering two Chocolate Log Blog readers a copy of Lorraine Pascale’s a Lighter Way to Bake.

The giveaway is now over.

Do take a look at my giveaway page to see if there is anything else you would like to enter.

I was sent a copy of A Lighter Way to Bake with no requirement to write a favourable review. As always, all opinions are my own. Thank you for your support of the brands and organisations that help to keep Tin and Thyme blithe and blogging.