Thick sugarless apple and raisin pancakes made with buckwheat flour. Flavour them with cinnamon, cover with a rich honeyed chocolate sauce and you’ll have a delicious dessert ready in no time. Ideal for those with a gluten intolerance. 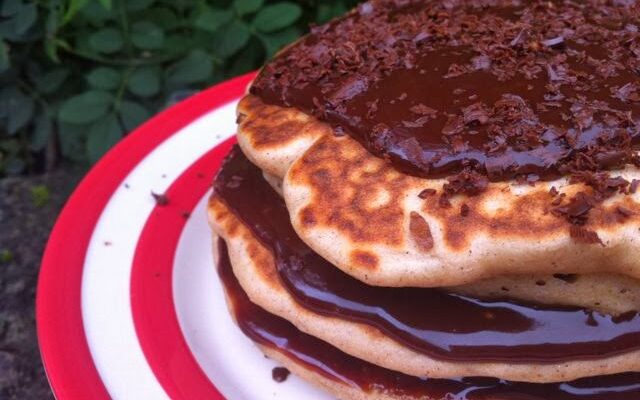 After I saw a review of the Ozeri Green Earth Frying Pan over at Elizabeth’s Kitchen Diary with its toxin-free, non-stick qualities, I was keen to try it out for myself. I fell in love with the cheerful lime green colour, despite my desire for only red equipment in my kitchen.

I particularly liked its non-polluting environmental credentials. I’ve always been very wary of non-stick cookware and have tried to steer clear of it due to its purportedly toxic nature. Made out of heavy-gauge anodized aluminium for even cooking, the natural ceramic coating on this pan is 100% PTFE and PFOA free, meaning there are no heavy metals or chemicals present.

The surface is textured which apparently helps to prevent food sticking and also speeds up cooking times by allowing heat to flow underneath the food. Ozeri claim that the coating is more durable and scratch resistant than other non-stick pans – only time and use will tell on that one.

CT and I love pancakes, but rarely cook them as we usually have problems with them sticking. I also find that if I fry butter at a high heat, it fills the kitchen with greasy smoke. On top of that I have to spend ages cleaning the pan. Pancakes, it seemed, were just the thing to test out the new pan.

Really, it was a wonder. I rubbed a tiny amount of butter over the pan before heating and then added no further fat throughout the cooking process. There was no sticking at all. The pancakes cooked quickly over a moderate heat and I was able to turn them easily.

I found the heat resistant silicone coated handle very comfortable to use and the pan well balanced. The 20 cm pan is a really nice size and fits a gap between my large pan and rather teensy one, just the right size for an omelette in fact. Cleaning up was a breeze. There was no discolouration and I could quite easily have just run a piece of kitchen paper around it rather than washing it up.

I’ve also used the pan to slow fry onions and that worked a dream as well. Storing the pan is a bit annoying as care has to be taken not to scratch the coating. I’ve been lining it with a piece of kitchen towel before putting it away to avoid scratching. I have seen reviews that say the non-stick quality of the pan doesn’t last very long. The accompanying instructions, however, do say that you need to occasionally clean it with vinegar to prevent a build up of food. It’s this build up which might render the cooking surface sticky. All in all, I am very pleased with my pan and will be making good use of it. Now where are those eggs?

Oh and I nearly forgot to say, the buckwheat pancakes were super delicious. Even more so, smothered as they were with honeyed chocolate sauce. I was rather pleased with my apple addition and the raisins and cinnamon lifted them out of the ordinary.

Thanks for visiting Tin and Thyme. If you make these buckwheat apple and raisin pancakes, I’d love to hear about it in the comments below or via social media. Do share photos on social media too and use the hashtag #tinandthyme, so I can spot them. For more delicious and nutritious recipes, follow me on Twitter, Facebook, Instagram or Pinterest.

Thanks to Ozeri for the green earth frying pan to try out. I was not required to write a favourable review and as always, all opinions are my own. Thanks also to my readers for supporting the brands and organisations that keep Tin and Thyme blithe and blogging.