If you’re running out of time to make biscuits but want to give homemade gifts this Noel, these Christmas Bliss Balls may be the answer. They’re not only delicious but are refined sugar, dairy and gluten free and easy to make. Rolling the balls in green pistachios, red cranberries and white coconut make them look wonderfully festive.

END_OF_DOCUMENT_TOKEN_TO_BE_REPLACED

Cranberry Sauce and What To Do With Your Christmas Leftovers

A lovely recipe for cranberry sauce made with orange and a dash of port. You’ll also find a few hints and tips on what to do with any remaining cranberries as well as other vegetarian Christmas leftovers. Love Food Hate Waste.

END_OF_DOCUMENT_TOKEN_TO_BE_REPLACED

Once upon a time, long long ago, I had an Iranian boyfriend. He introduced me to a whole new cuisine, which, although similar to the Middle Eastern one I was more familiar with, was distinct and flavoursome. It was rare that he did any cooking, but when he did he always made the most delicious rice in the classic Persian way, complete with tahdig.

END_OF_DOCUMENT_TOKEN_TO_BE_REPLACED

Saffron with its bright yellow hues and subtle floral and bitter notes is a spice which seems singularly exotic. But it has long been associated with Cornwall. It is said that the Cornish traded with the Phoenicians way back, exchanging tin for saffron and it’s been used here ever since. This may or may not be true, but saffron was a highly popular ingredient in the Middle Ages and saffron crocuses were grown in Bude until the late 19th Century.

END_OF_DOCUMENT_TOKEN_TO_BE_REPLACED

Cranberry Upside Down Cake with Orange

A sweet, tart and colourful cranberry upside down cake. It’s made with white chocolate and flavoured with orange and cardamom. Chilli is an optional extra. Perfect for Christmas, Thanksgiving, New Year’s Day or any other winter festivities. Cranberries aren’t just for turkeys.

END_OF_DOCUMENT_TOKEN_TO_BE_REPLACED

It’s National Chocolate Week, although every week is chocolate week in this household. Nevertheless, this seems a good time to post a showstopper chocolate cake.

This chocolate red wine cake was one of the first recipes I made from Charlotte Pike’s Easy Baking in her Hungry Student series of cookbooks. I made it back in July as my birthday offering to my work colleagues. The cake is a plain unadorned one, although I can assure you that the taste is by no means plain. However, as it was a celebratory cake, I created a chocolate red wine icing to top it and decorated it using chocolate fingers. Sadly, like the chocolate amnesia cake, I forgot to write down exactly what I did and I can no longer remember.

However, recently, I had the perfect opportunity to make one again and remind myself just how good it was. I was set a challenge of creating a Home Bargains Showstopper and was sent a selection of goodies to help me on my way. I was thrilled when a box arrived in the post packed full of all sorts of baking paraphernalia; it reminded me of a Christmas stocking as I excitedly pulled out one thing after another. The theme was definitely pink and what girl doesn’t like pink? There was a three layer pink cardboard cake stand, a pink heat mat, pink cupcake cases, pink hearts and pink marshmallows. Luckily, there was a fair amount of red in it too and red is the colour of my kitchen. I immediately fell in love with the red strawberry apron and oven glove and was pleased with the two red silicone cake moulds and cookie cutters. And it was indeed a home bargain as the whole lot would have cost less than £14. Products are available online or at 300 Home Bargain stores across the UK. 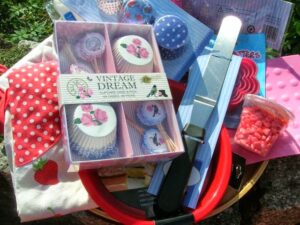 Then along came the first Cornish Clandestine Cake Club event I’ve been able to attend in a very long time and the theme was vintage. Held at a Cornish winery, it was more of a “vin” theme than a retro recipe one, but it was left up to us to choose. The chocolate red wine cake was a must. This time I made use of some dark cranberry chocolate that was in need of using and added it along with some cranberries soaked in red wine. I donned my lovely new apron, got out the new oven glove and cake decorations, washed the cake moulds and palette knife and set to, making up a filling and topping recipe once again. This time I wrote it down.

Moist, tasty and easy to bake, this has become one of my favourite chocolate cakes. The addition of wine soaked cranberries was inspired, though I say it myself and added piquancy and a hint of luxury. Mine was not the only red wine cake at CCC, but CT reckoned that it stood up well to the competition. In fact, in an unguarded partisan moment, he declared it to be the best cake there.

The winery, Knightor, near St Austell and the Eden Project is housed in an old stone barn that has been spectacularly renovated. As ever, there were some fabulous cakes made by the indefatigable home bakers of Cornwall. Thanks to our mistress of ceremonies, Ellie, for organising another splendid CCC.

These sweet and sticky buttery fruity yeast chocolate Chelsea buns are a real treat. They’re studded with the usual raisins, but also dark chocolate to give extra depth of flavour and delight.