Filling, delicious and nutritious, this chunky vegetable soup is perfect for kick starting the new healthy you. It’s vegan, fat free, low in calories and quick to make too. Perfect for the 5:2 diet and Veganuary. 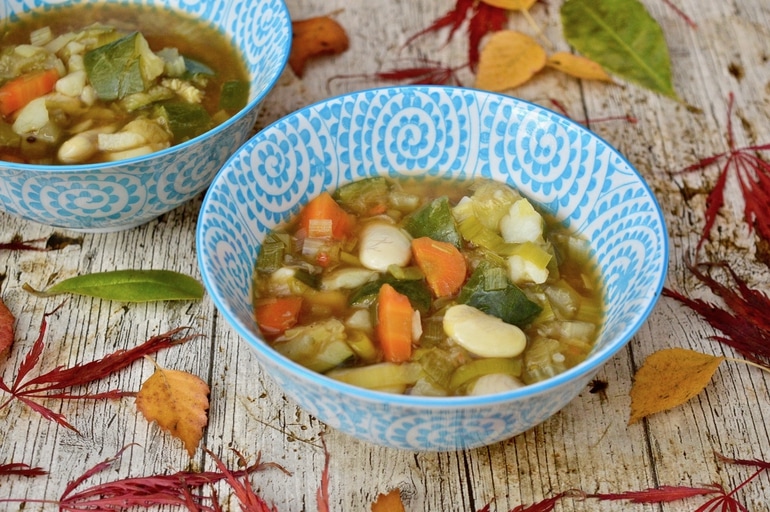 I do love a good soup. Which is lucky as I eat an awful lot of them, especially in the colder months of the year. Since I acquired my Froothie Evolve, I’ve been making them even more than usual. This amazing piece of kit not only blends, but makes soups too. Both smooth and chunky. Take a look at my squash and red pepper soup to see a smooth version.

This chunky vegetable soup recipe is a very simple one, but it makes for a really easy and healthy meal. It’s surprisingly delicious too.

Once you’ve prepared the vegetables, all you need to do is throw everything into a pot and cook it. You can’t get much simpler than that. No frying, roasting or using a load of different pots, pans and utensils. It makes washing up a lot easier.

I tend not to add too much salt to my cooking, so you might want to up the quantity stated in the recipe to suit your taste. On the other hand, if you’re on a low salt diet, you may need to reduce it. I’ve used vegetable bouillon powder rather than a stock cube as I’ve found a particularly good brand from Suma which I now stick to. It’s a low salt version and organic too. 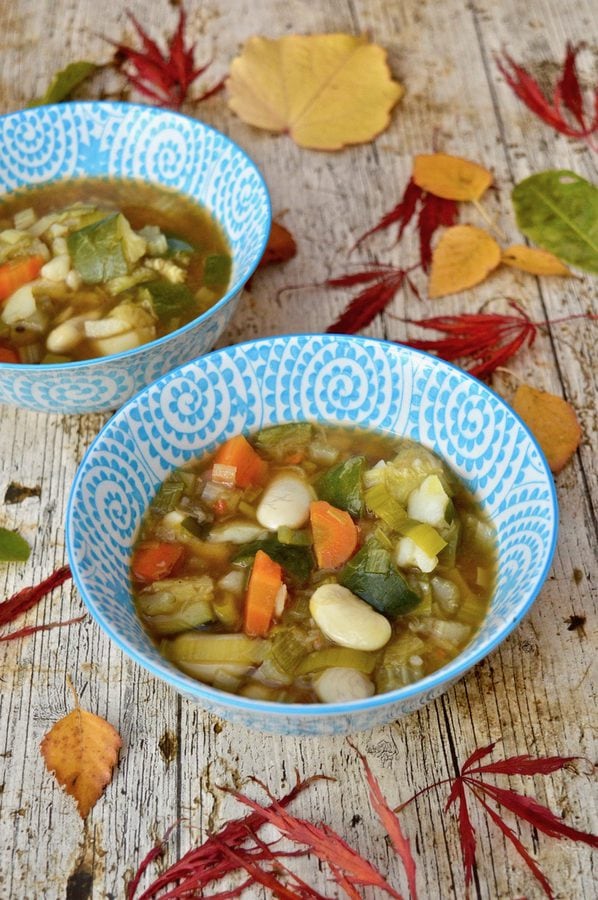 If you make this chunky vegetable soup on the stove top, it’s best to add the miso right at the end. Once the soup has stopped boiling that is. Miso is a fabulous ingredient. It’s not only very tasty, but it’s full of various vitamins as well as folic acid.

A good fermented miso paste should be unpasteurised so that we benefit from the beneficial gut bacteria it contains. So if you boil it, all of those lovely bacteria get destroyed. It’s fine to add it to hot liquids, just not boiling water. For the Froothie Evolve, however, I’ve just bunged it in along with everything else at the beginning. It’s meant to be a no fuss method of making soup after all.

I actually used Hodmedod’s fava bean umami paste, which is a sort of British miso.

Can I Use Different Vegetables?

The wonderful thing about a chunky vegetable soup, is that you can use pretty much whatever veg you fancy. It’s the sort of soup that’s great for having a fridge clear out. Feel free to swap any vegetables for those given in the ingredient list. It will very much depend on what time of year you’re making the soup as to what is seasonally available. 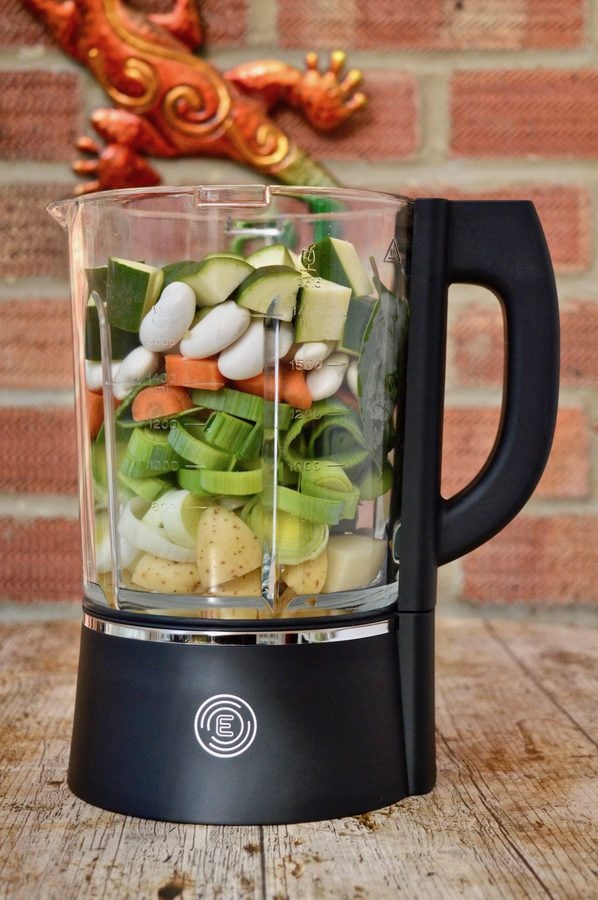 Celery is a fantastic vegetable for adding calorie-free flavour to soups and stews. It lasts quite a long time in the fridge, so it’s well worth keeping some in stock. It’s by no-means vital for a delicious chunky vegetable soup though. You could, perhaps, substitute it with a sprig or two of fresh herbs such as rosemary or thyme.

Some sort of allium is de rigour when it comes to soups and stews. They add much in the way of flavour and health benefits. But it doesn’t have to be leeks. You can use onions, shallots or even wild garlic instead.

I’ve added potatoes to help bulk up the soup and to provide additional nutrients. If you use skin-on potatoes, they are surprisingly nutritious. However, sweet potatoes would do a very similar job. If you’re going to use sweet potatoes, you might not want to include other sweet vegetables such as carrots though.

It doesn’t seem to matter how often I use carrots, there are always some hanging around the house begging to be used. So carrots go into many of my soups and stews. They’re also cheap and easy to get hold of all year around. But instead of, or as well as, carrots you could use other root vegetables such as parsnips, swede or celeriac.

Beware beetroot however. It can take quite a long time to cook and it will colour your soup purple. Just take a look at my beetroot miso soup if you don’t believe me. And apart from anything else, CT hates beetroot.

I just happened to have a courgette in the fridge at the time I made this chunky vegetable soup. It’s nice to have a softer vegetable in the soup to provide textural variety. But sweet peppers or squash would be lovely too.

It’s also good to have some different colours in the soup. This is not only because it usually looks nicer, but eating a rainbow of colour provides a good mix of nutrients. Some sort of cabbage, kale or green beans would do the job perfectly.

Butter beans are one of my favourite pulses. They have a nice flavour and a creamy texture which I find particularly appealing. But for the soup you can see in this recipe, I used something a bit different. 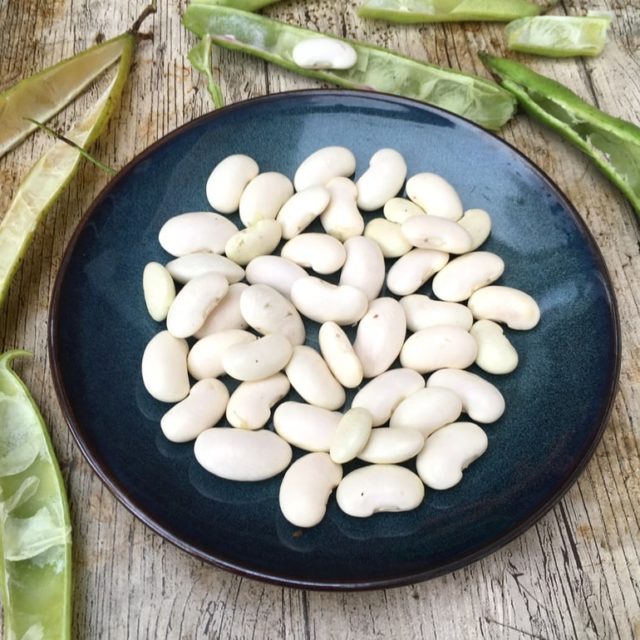 We grow a variety of white runner bean in the garden specifically for the mature shelled beans, not the young green pods. They’re really delicious and similar in size and flavour to butter beans. The very last of the crop went into this chunky vegetable soup.

Pulses provide a lot of nutritional benefits as well as bulk. So they’re great for soups and stews. So swap butter beans for black beans or red kidney beans or whatever your favourite happens to be. But for a chunky soup, it’s best to go with something fairly large, so perhaps not lentils or small beans such as aduki.

You don’t need a Froothie Evolve for this recipe as you can make it very easily on the stove top. The advantage of the Froothie Evolve, however, is that you just bung everything in, select the chunky soup option then walk away for thirty minutes until it’s done. When I have something simmering away on the stove, I feel I need to come back regularly and check it’s not boiling over or if it’s even cooking at all. 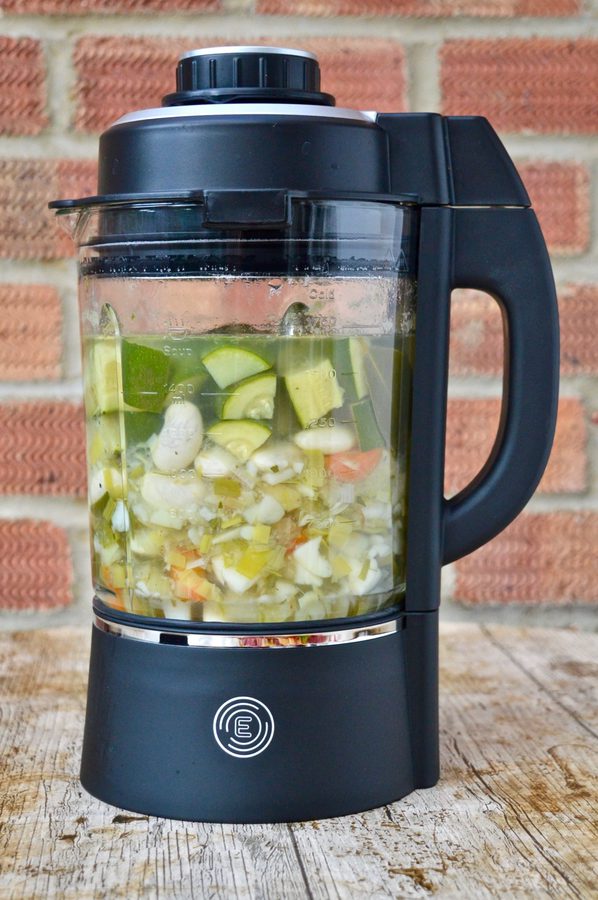 Having said that, there are a couple of things to note:

If you buy a Froothie blender* through this link, you will get an additional two year warranty. This brings your total warranty up to seven years.

There are more options than the Froothie Evolve. Much as I love this machine, I’m also attached to the Optimum 9200a*, which was the first power blender I ever used. It’s a much cheaper option but still a most powerful beast. You can read more about it in my review.

If you don’t have the cash up front, Froothie offer a 0% finance deal so that you can spread your payments. And of course, there’s a thirty day return period, just in case you’re not happy with your blender.

For more delicious soup recipes, take a look at my soup category.

Thanks for visiting Tin and Thyme. If you make this simple chunky vegetable soup, I’d love to hear about it in the comments below or via social media. Do share photos on social media too and use the hashtag #tinandthyme, so I can spot them. 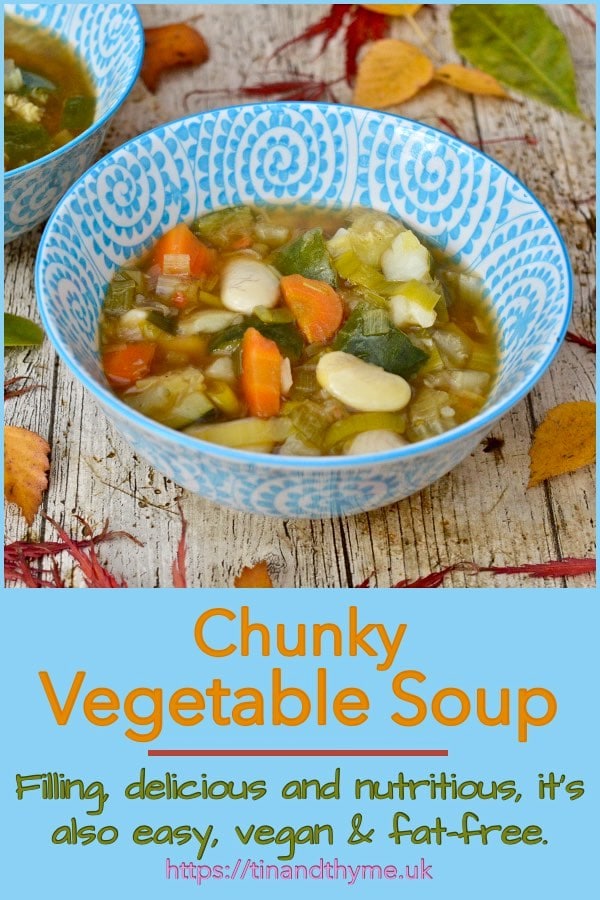 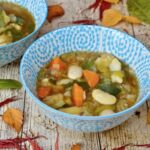 The quantities given will feed two as a main meal and four as a light lunch. Feel free to swap out any of the vegetables for whatever you have to hand. Please note: calories and other nutritional information are per serving. They're approximate and will depend on exact ingredients used.

I’m sharing this healthy chunky vegetable soup with Recipes Made Easy for #CookBlogShare.

This post contains affiliate links to Froothie Optimum products*. Links are marked with an *. If you buy through a link it won’t cost you any more, but I’ll get a small commission. Thanks to my readers for supporting the brands and organisations that help to keep Tin and Thyme blithe and blogging.

Previous Post: « Vegan Mayonnaise – So Quick, So Easy, So Useful
Next Post: Breakfast Banana Bread – A Great Way to Start The Day »