August may herald the end of summer, but as long as I get my chocolate fix, I can cope. These chocolate bites sent for review are how I made it through this August.

Beech’s Fine Chocolates pride themselves on traditional chocolates made in Britain since 1920. They have recently launched a new range of colourful chocolate bars. I fell in love with the packaging immediately. The colourful Indian inspired patterns were a delight to the eye. The colours cleverly reflect the flavours hidden within. The ingredients are minimal as befits a good bar of chocolate. They are also all natural with no added vegetable oils, making them clean tasting and creating a good snap. At a recommended retail price of £1.25, these are a bit of a find. Weighing in at 60g and with resealable packs, these bars are particularly good when out and about and for people who show more restraint than I do.

Milk Chocolate – sugar, cocoa butter, whole milk powder, cocoa mass, skimmed milk powder, soya lecithin, natural vanilla.
This was creamy with caramel notes, but with the chocolate to the fore. We both liked it. With only 30% cocoa content, I was expecting this to be overly sweet and lacking in flavour, but I was wrong.

Plain – cocoa mass, sugar, cocoa butter, soya lecithin
This 55% cocoa content bar, although quite sweet, was smooth and neither harsh, nor bitter. It was fruity with caramel notes – not bad at all. 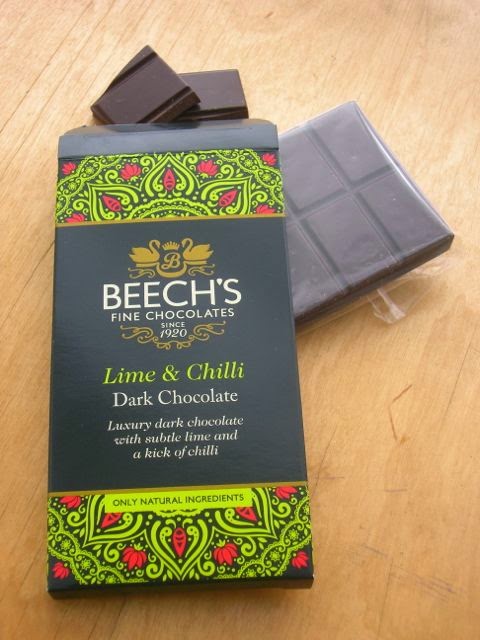 Anglesey Sea Salt – sugar, cocoa butter, whole milk powder, cocoa mass, whey, soya lecithin, Anglesey Sea Salt
Little bursts of saltiness erupted on the tongue, but it was not overly and harshly salted as some sea salt chocolate can be. The caramel notes of this 30% chocolate, combined well with the salt and was reminiscent of my favourite salted caramel.

Ginger – cocoa mass, sugar, cocoa butter, soya lecithin, natural ginger
We got an immediate hit of ginger, which we both loved. The chocolate tasted fruity and was very smooth. We’d been expecting chunks of ginger, but the flavour permeated the whole bar and very pleasant it was too.

Lime and Chilli – cocoa mass, sugar, cocoa butter, soya lecithin, natural lime oil, chilli
The scent of lime emanating from the packet was strong and reminded me of old fashioned chocolate limes. The cooling lime is the first flavour that hits the palate, then the chilli kicks in at the back of the throat – a very nice combination. This is quite a spicy little number and may not be enjoyed by those averse to a little heat. As a chilli fiend I really enjoyed this one. 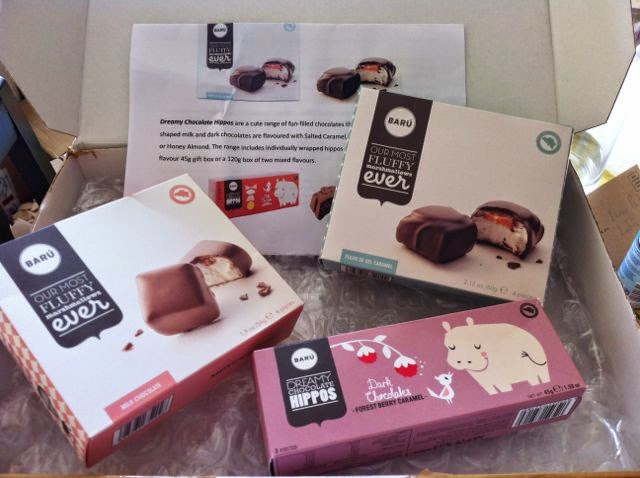 Barú is a Belgium confectionary company that has recently developed a new range of high end marshmallow confectionary in time for – shhhh – Christmas. The range is available at Harvey Nichols, Wholefoods and selected independent retailers. Waitrose stocks the dark, milk and sea salt caramel marshmallows. The packaging is light and fun. Individually wrapped, the marshmallows come in boxes of four (54g) and cost £2.99. The hippos come in a 45g box of three individually wrapped pieces and cost £3. Ideal stocking fillers all. 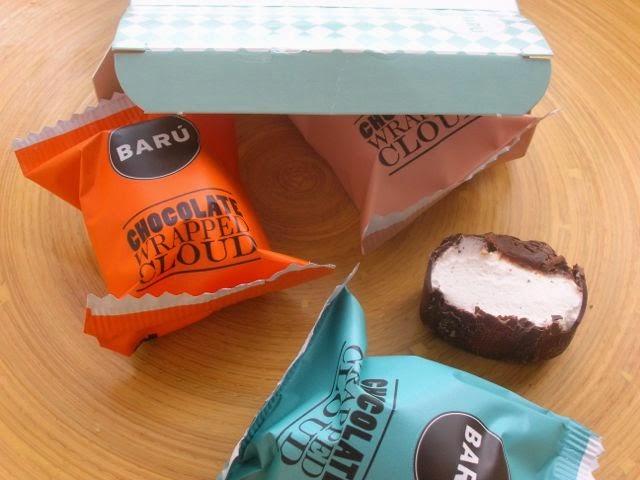 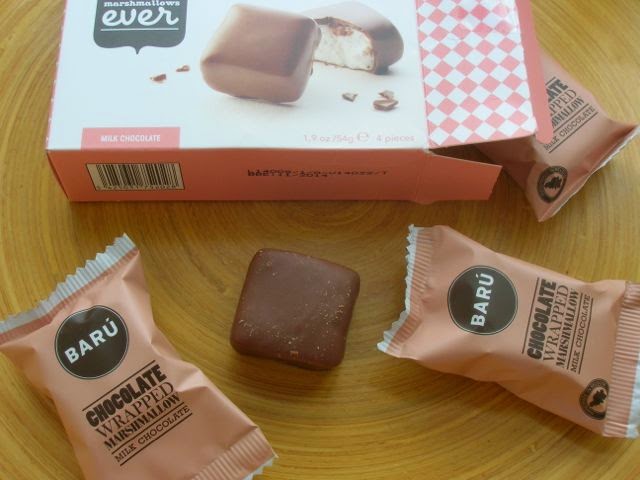 Fleur de Sel Caramel Wrapped Marshmallow Clouds – The chocolate tasted stronger and was a good combination with the sweet marshmallow. There was only a smidgen of salted caramel, which was a shame: the salt was detectable, but not really the caramel. It was pleasant enough, but I couldn’t see see the advantage of having it – it’s a distraction from the marshmallow itself. Dark Chocolate Forest Berry Caramel Hippo – Extremely cute and cuddly chocolate hippos were filled with a delicious fruity liquid caramel. They tasted slightly salty (although this wasn’t mentioned in the ingredients). I really enjoyed this one. A cute little box containing six chocolates arrived in the post accompanied by a leaflet about chocolate parties for kids. Now that does seem like a good idea, what kid wouldn’t enjoy covering themselves, as well as their favourite biscuits, with chocolate? Looking at their website, it seems that in addition to this service, Owow create personalised chocolates to order. Their speciality is covering pieces of cake or biscuits, specifically oreo biscuits, with Belgian chocolate. I was sent two cake wrapped flavours to try. The list of ingredients on the back was quite large, but with cake included in the mix, this was only to be expected. The chocolate itself contained only sugar, cocoa butter, whole milk powder, cocoa mass, soya lecithin and natural vanilla flavouring.

Owow – We thought the differing textures of crunchy chocolate and soft cake worked very nicely and the flavour of hazelnut was pleasant. A nice concept and the sort of thing I would have loved as a child, but they were a little too sweet for old fogeys like us.

Caymana – Again the concept of this chocolate was very good and the name conjured up the flavours of the Caribbean well. On first tasting, CT cried, “Caribbean plum cakes”. There was a nice fruity flavour with a noticable dash of rum. However, the proportion of cake to chocolate was very small and the chocolate, being very thick, rather overwhelmed the flavour of the cakes. 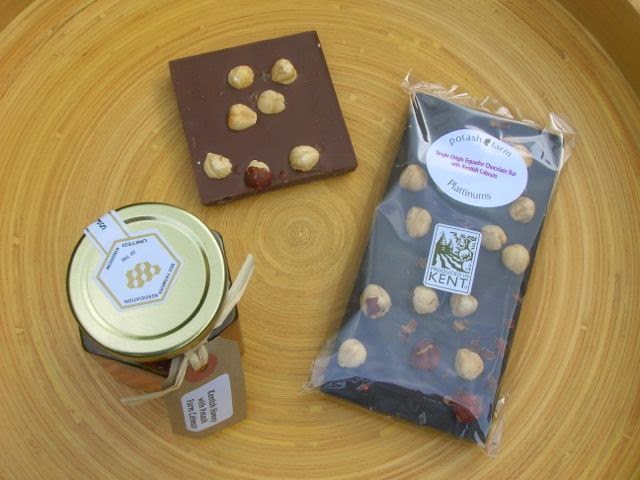 Last year I reviewed some Kentish cobnut fudge from Potash Farm in Kent. This year I’ve been sent something even more exciting – chocolate and honey. Cobnuts are a type of hazelnut that grows particularly well in Kent. They lend themselves to all sorts of delicious treats. Weighing in at 120g each, the chocolate bars were quite sizeable. The chocolate is made by Linton Chocolate, but the cobnuts come from the farm. 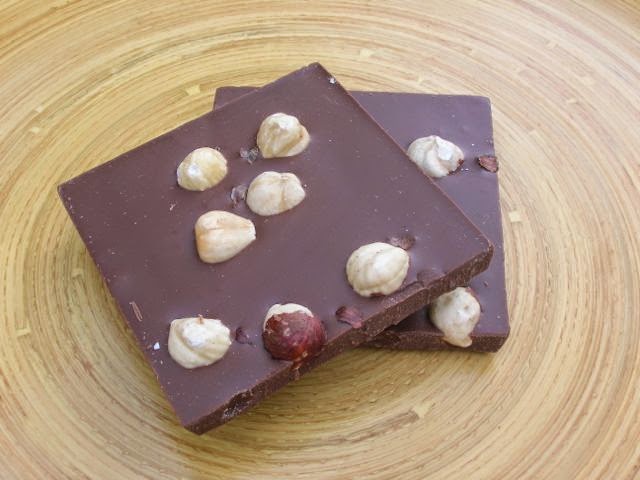 Single origin Ghana chocolate bar with Kentish Cobnuts – sugar, cocoa butter, dry whole milk, cocoa mass (40%), soya lecithin, natural vanilla flavour, Kentish cobnuts.
A high cocoa content milk chocolate bar is almost guaranteed to please me and this one with its crunchy tasty cobnuts did not disappoint. The chocolate was creamy and whilst it didn’t have any outstanding characteristics, it didn’t need to, as the uber tasty cobnuts were the real star of the show. 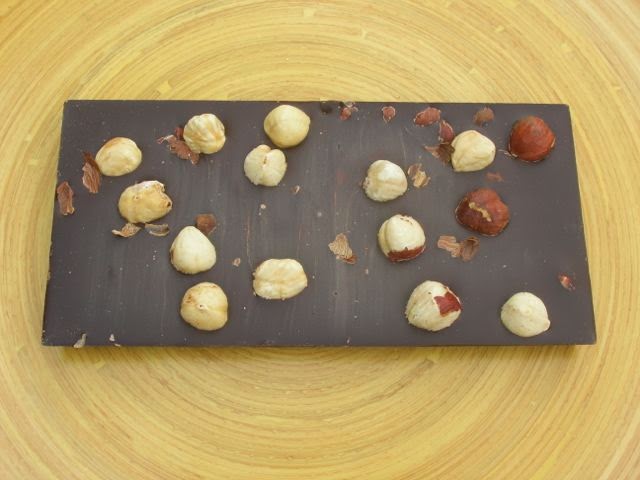 Single origin Ecuador chocolate bar with Kentish Cobnuts – cocoa mass (70.4%), sugar, cocoa butter, natural vanilla flavour, Kentish cobnuts.
This was much darker and richer than the previous bar and the chocolate had more depth of flavour too. It had a smooth mouthfeel and was not at all bitter. It complemented the cobnuts well, but gave them quite a different taste to the milk chocolate bar – this was more of a duet than a solo. Despite my love of milk chocolate, this dark and luscious bar was my favourite. The nuts encourage a healthy munching and I found this didn’t last nearly as long as I thought it would. 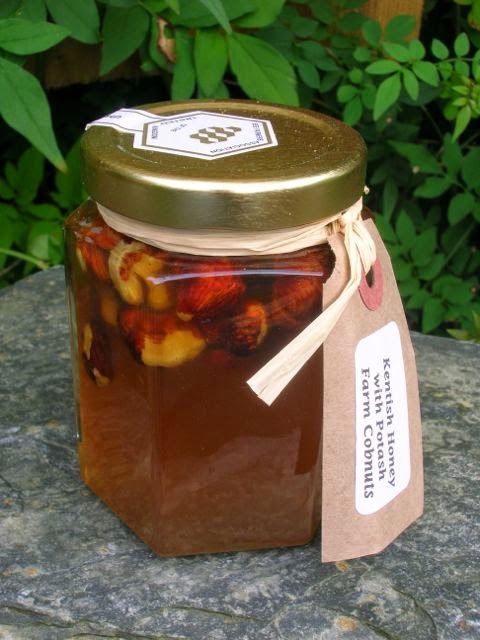 Kentish Honey with Potash Farm Cobnuts
Two simple ingredients, but what a rich and complex flavour. I particularly enjoyed the  heady aroma that made me almost swoon with delight when the lid was first removed. It tastes and smells like authentic honey straight out of the beehive, said CT. And who can resist honey coated hazelnuts – we couldn’t. Added to natural yogurt or ice-cream, these nuts turn a simple dish into a sophisticated and highly pleasurable treat. This would make an ideal gift for a honey lover.