A Trio of Gourmet Chocolate Desserts

It’s the season of mists and mellow fruitfulness so fruits and nuts are at the fore. Chocolate, however, is always in season. Over the last month, I had the pleasure of being sent the following products to review. All are artisan chocolate desserts made using good quality ingredients.

I loved the concept of these Eden’s Gourmet Apples, a deluxe version of toffee apples. Covered in caramel and then coated in Belgian chocolate and decorated with nuts or cookies, these just had to be better than your average toffee apple. I bet Eve would have been even more tempted by one of these in the Garden of Eden. I haven’t had a toffee apple in years, so was quite excited by the prospect of trying one. The two I was sent were very nicely presented with bows and looked most inviting. CT thought they looked like lava and who wouldn’t like chocolate lava? Both were milk chocolate versions, but one was covered with oreo cookies and the other with walnuts.

I unwrapped the first with glee, grabbed the stick and tried to take a bite of the admittedly larger than mouth sized apple. This proved to be very difficult as not only was it too large, but the chocolate proceeded to shatter and fall off. Had I bothered to read the instructions on the packet, I would have realised the stick was a prop to conjure up nostalgic memories of childhood fun fairs and bonfire nights. The serving suggestion given was to cut the apple into six to eight pieces. This makes a lot more sense; I had to grab a plate anyway to catch the cookie and chocolate fragments. By the time I came to eat the second apple, I was wise to its ways. Even so, the outer coating came off rather too easily, making it difficult to eat all components at the same time. When I managed it, I found the tart apple and sweet confectionary was a very good combination. I was less sure about the chewy skins of the apples.

The apples had shiny waxy skins and looked suspiciously like Granny Smiths. To the best of my knowledge these aren’t grown commercially in the UK. I hope I was mistaken and they are in fact true British apples. I’m sure the skins contributed to the caramel and chocolate falling off so easily. It was hard to tell if the chocolate is world class, as claimed; it was rather overpowered by the caramel, nuts, cookies and apple.

However, unlike most toffee apples where the apple itself was often mushy or bad, these apples were in good condition, tart and crisp. Due to other commitments, I was unable to eat the second apple for a couple of weeks. Surprisingly, this did it no harm at all. The apple remained in good condition.

These gourmet caramel apples are definitely a bit of nostalgic fun and would make a unique gift for any occasion. The less sweet and crunchy walnut version was our favourite. They can be bought for £7.95 at the online shop. 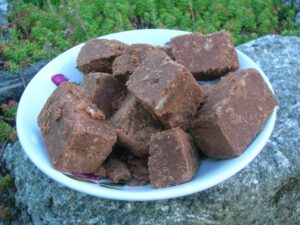 We have been noticing lots of hazelnuts in the hedgerows around here in East Cornwall, so we have surmised it must be a good year for them. Normally the squirrels get to them before we do. Hopefully this isn’t the case at Potash Farm, a leading producer of Kentish cobnuts, which I was very pleased to find is a Soil Association registered organic farm. Not only that, but it has the distinction of being the only farm to carry this status for cobnuts. Cobnuts are a type of large hazelnut traditionally grown in Kent and were particularly prized by the Victorians for their superior taste. They are harvested and sold both in their green juicy state for eating in late summer or in their dehusked and mature state for Autumn and Christmas consumption.

Along with such other chocolatey delights as their chocolate enrobed caramelised cobnuts, Potash Farm have recently launched this chocolate and Kentish cobnut fudge. Pairing chocolate and hazelnuts is a classic and much loved combination. So, how do they match up in fudge? Well the two testers in this house gave it the thumbs up and one had to be physically restrained from finishing the bag off all by him/herself. It’s easy to see why: this fudge is rich and chocolatey with the added bonus of an interesting texture delivered by little pieces of chewy cobnuts. Once the crumbly yet creamy fudge has disappeared there are still cobnut fragments to chew on – a piece of fudge lasts longer than you might expect.

It was chocolate and nuts again – hooray. As I’ve already stated, this is a winning combination. Having tasted first walnuts with chocolate, then cobnuts, it was good to get some variety and this time it was almonds in the spotlight.

Calling this chocolatey treat a terrine is a good idea, it’s such an apt name. The firm truffle like consistency, with its smooth texture, has a chewy bite to it from the liberal addition of nuts. The addition of Amaretto was perfect, not in the least bit overwhelming, but giving an added air of luxury to the terrine. Like the fudge, the  chewy nuts made each mouthful last much longer than it otherwise might. It was very rich and was like eating chocolate truffles with a spoon. This is a dessert for sharing, or taking the odd surreptitious spoonful when passing the fridge, ahem – naughty but very nice. The terrine was well and truly embedded in its tub and I was unable to turn it out. This was rather annoying as it would have been nice to slice or cube it and add some to the top of an ice-cream sundae for example. It’s the sort of dessert I could very quickly become addicted too.

I really liked the style of the wrapping which is bright and reminiscent of a patchwork quilt. However, I was not so happy that it was delivered in a very large box. I thought I’d received a huge hamper of goodies so I was very disappointed to find only one small tub of chocolate terrine. I dislike waste and this seemed ridiculous. To be fair, the box also contained a small wooden tray full of leaflets and a cute 40 piece wooden jigsaw of another Patchwork design, but that didn’t take up a great deal of space either and I have no idea what I’m meant to do with all the leaflets.

Handmade in the Welsh countryside, Patchwork Traditional Food Company produce three chocolate versions of their terrines. They started off life making traditional meat and fish pates but have now branched out into all sorts of other products including a vegetarian lentil, garlic and mushroom pate that grabbed my interest.

A video recipe on the Patchwork site suggests warming the terrine up, mixing with creme fraiche and pouring into a baked pastry case to create an easy chocolate tart. As you’ve already discovered, I didn’t do that, but if I’d had a few to experiment with, I surely would.

I was sent these items for review purposes and as always, all opinions are my own.