If you’ve never been to Cheltenham, you might just want to pay it a visit. It’s a beautiful regency town with a laid back air. Afternoon tea is a must. Find out where to eat and where to stay in this mini guide when five arrive in Cheltenham. 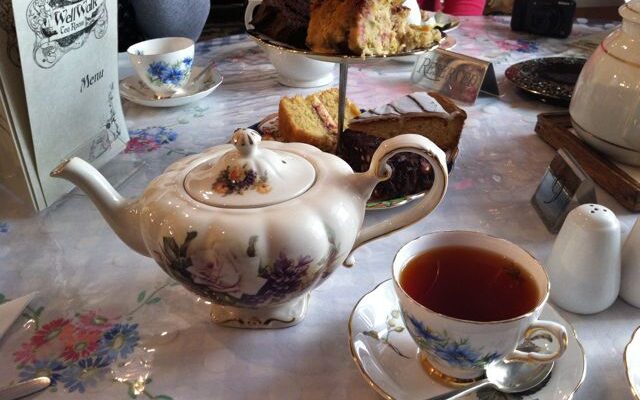 Finally, after many months of talking, or possibly even years, #thesmuts arranged a meet up. Smuts? You might well ask, but it is a long story and I’m not going into it here. Suffice it to say, it started as a bit of fun and ended up as a group of eight food bloggers who tweet to each other using some sort of hashtag that includes “smut”.

Far flung as we all are – France, Scotland, Cornwall, East Anglia and London, we eventually agreed on Cheltenham as a nice place to meet. It’s relatively central and has a main line train station with good links to all of us.

One by one, as is inevitable with meet-ups, various #smuts were unable to make it. Jac of Tinned Tomatoes was away in Cyprus, Dom of Belleau Kitchen wasn’t well and Sue of A Little Bit of Heaven on a Plate had work commitments.

Thus it was the Cheltenham Five who finally met and enjoyed a gluttonous afternoon and evening of eating and drinking: Janice of Farmersgirl Kitchen, Roz of The More Than Occasional Baker, Karen of Lavender and Lovage, Fiona of London Unattached and me.

I’d met Karen and Fiona briefly before at a Fortnum & Mason event and it was lovely to see them again. It was also really good to finally meet Janice and Ros. With top hole organisation courtesy of Fiona and Janice, everything went swimmingly well. The only contribution I had to make was to turn up.

Where to Have Tea in Cheltenham

We all met up for an early afternoon tea at the Well Walk Tea Room. Quirky, stuffed full of vintage china and other items AND with great cake, this was an excellent find – thank you Fiona. Apparently, they have supplied props for Downton Abbey and I can well believe it; there are some very fine items down in the basement and indeed crammed into every available space of the two floors of the tea rooms.

Feeling somewhat peckish as she hadn’t had any lunch, Fiona started off with toast and Gentleman’s Relish. The rest of us, however, no sooner saw the menu than there were cries of “we want CAKE”. A cake medley to be precise, which was a stand of six assorted slabs of homemade cake and clotted cream.

We tried to be decorous, but somehow that cake just disappeared. The verdict was unanimous, we all loved the rhubarb and cinnamon cake and wanted the recipe. In this respect, we were doomed to disappointment, the recipe was a house secret.

Somewhat stuffed and with dinner not far off, we somehow couldn’t resist the call of scones when we were told they were freshly out of the oven. Served with homemade jam and clotted cream, they were nearly as good as a Cornish cream tea.

Not being much of a black tea drinker I didn’t share the very large pot of tea with the others, but ordered Rooibos and had a lovely teapot all to myself, named Boudica – yes, every teapot has its very own name.

Where to Eat in Cheltenham

Not long after this, we made our way to The Tavern, a couple of streets away. Luckily we got a little lost which meant we had a bit more time to digest before the next onslaught. Here, we were greeted by friendly staff and complimentary cocktails – something to do with Fiona having forewarned them that we were food bloggers, I suspect.

The Mojito Royal was a popular choice and one I was not averse to indulging in – it really hit the spot. Drinks were served with mugs of popcorn making for a festive atmosphere.

Whilst we made up our minds as to what to order, we opted for some nibbles to keep us going. The chickpea chips were a real winner and everyone’s favourite, but we were all a bit nonplussed by the deep fried olives, which were, quite frankly, weird and not something I’d choose to eat again.

The others all had fleshy things for their mains, but were well satisfied. I was pleased to have some interesting veggie choices. I opted for a rather splendid burger stuffed with all sorts, including roast vegetables and a field mushroom. The fact it was accompanied by more of the delightful chickpea chips might have played its part in my decision.

The meal didn’t disappoint. Again the service was good and the prices were very reasonable. I’d be very happy to pay a return visit and rather wish we had something similar here in Liskeard.

We were asked to take a look upstairs where the dishes are cooked in front of diners. In fact you can sit at the kitchen serving bar and for a few pounds ask to taste any of the dishes you see being prepared. This is a fun idea, but with the clang and clatter of pans, perhaps not the most conducive place for a tete a tete. We were, I felt, better off in the relative quiet of downstairs.

Full as we were, we just couldn’t miss out on pudding and chocolate had to feature somehow. I was lucky because we plumped for a hot chocolate mouse with pistachio ice-cream. We all tucked in.

Where to Stay In Cheltenham

For some reason we picked a particularly busy weekend and were unable to book into the same hotel, as was the original plan. This was a shame as it would have been fun to carry on the food fest by feasting on breakfast together.

After trying several hotels, I eventually found one with a free room and gosh I was lucky. Lypiatt House was a lovely little Regency hotel in a quiet and attractive quarter of Cheltenham, not far from both the town centre and the station.

I had the best night’s sleep there I’ve had in a very long time and the breakfast was delightful. I’m not sure I’d put the hotel down as the five star it claimed, but it really was a very comfortable and spacious place to stay.

I later learned that there was a “buskers’ conference” in Cheltenham that weekend which might have accounted for the lack of hotels. It all seemed rather peculiar and I have to say I didn’t encounter a single busker whilst out and about in Cheltenham.

I really enjoyed my five arrive in Cheltenham trip and meeting up with the other #smuts. In fact I’m looking forward to a repeat performance and maybe with the full eight next time. Not only was it a pleasure to join company with such lively and friendly fellow food bloggers, but it was also very interesting to finally visit Cheltenham.

As a regency spa town, I knew I would like the Georgian architecture, but with its wide leafy avenues too, I was unprepared for how much it made me miss Leamington Spa, where I lived for seven years. It’s a similar, if slightly smaller town.

For further insights into our five arrive in Cheltenham trip and a glimpse of better photos, do take a look at Janice’s post.

Thanks for visiting Tin and Thyme. If you enjoyed this five arrive in Cheltenham post, I’d love to hear about it in the comments below. Do share photos on your preferred social media site and use the hashtag #tinandthyme, so I can spot them.