Home » Reviews » Eating Out, Travel and Events » Events » A Food Blogging Fest
Share on TwitterShare on FacebookShare on PinterestShare on LinkedInShare on E-mail

I am so behind with my posts at the moment; there are some I’ve drafted from nearly a year ago which I still haven’t published and other things I haven’t even started writing. Hey ho, better late than never, I hope. Here’s a brief account of my upcountry adventures of over two weeks ago, meeting up with other food bloggers. 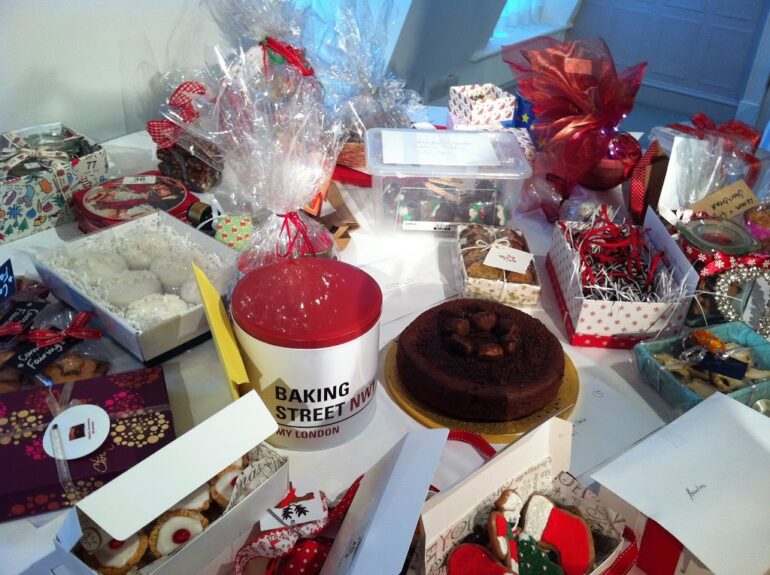 To say I don’t get out of Cornwall much is not quite true, as I cross the border into Devon several days a week to go to work. But I love my home county and find more than enough to do and see here, so I don’t feel the need to leave it very often. Sometimes though, an unmissable event drags even a home bird like me out of her nest.

A food blogging conference to be held in Birmingham was the lure – the first in the UK to be held outside of London, Bite n Write organised by Annie Ko. As well as several presentations I hoped I’d find useful, I was also keen to meet up with food blogging friends Kath of The Ordinary Cook and Jac of Tinned Tomatoes.

Having finally committed to this, it just so happened that Vanessa Kimbell of Goddess on a Budget invited me to attend her Lets Make Christmas event at Fortnum & Mason in London, the very day before Bite n Write.  Well that was just too fortuitous to turn down, so I didn’t.

Both events were really well worth attending and I enjoyed them for different reasons. Really annoyingly, I was so taken up by events at both venues that I hardly took any photos. I’m not going to write too much of an account of either, as both have been well documented by other attendees over the blogosphere – and they all seem to have taken photographs too! But here are a few highlights:

This was a very glamorous affair for a country bumpkin. But it was also very warm and friendly with lots of familiar blogging names to meet and have a chat with. As well as this, the aim was to make a Christmas gift or gifts, blog about it, then bring it along to be judged by Dan Lepard no less. There were some fabulous prizes up for grabs. Ultimately we swapped our gift for another blogger’s gift, so we all ended up being winners in the end.

The tables were completely laden with gifts and they were quite awe inspiring too. Many had put huge amounts of effort into their creations. My rather humble offering was some of these spicy pumpkin biscotti. In return, I was thrilled to receive a jar of candied pecans from Jaynerly and most delicious they are too. I will definitely be making some Christmas nuts with the recipe.

My biscotti got carried off in the hands of The Botanical Baker. It was fun to meet so many lovely food bloggers and a delight to finally meet Dan and his partner David after the aborted attempt back in October. It was also really good to meet Vanessa who put a lot of effort into organising this event and deserves our thanks. She was just as warm and lovely in person as she comes across on the radio and her blog.

You can see her write up of the event including pictures, a list of the winners and links to all of the participants’ blogs here. As it was an afternoon event, it was quite appropriate for us to drink tea and eat F&M’s delicious mince pies and even more delicious chocolate mousse mini logs, so I knuckled down and did my duty.

It was good to meet bloggers I hadn’t come across before but I was particularly pleased to put faces to names I knew so well. And especially the following – We Should Cocoa (ers) all!

Not having been to Fortnum & Mason for over 20 years (how scary is that?), I took the opportunity to have a bit of a mooch. Gracious, there were some fabulous goodies on offer and it all looked so tempting. It was, of course, rather on the pricey side, so I was very pleased that we were all given a pack of white chocolate & cranberry florentines to take home with us.

The next day was much more industrious. We were all more concerned with paying attention and writing down tips than about chatting. Although there was of course some opportunity to network. As well as meeting Kath and Jac, which was a delight, I managed to have a brief catch-up with a number of others including:

The conference was held in the colourful Custard Factory, a suitably named venue for a food bloggers event. A photography workshop by Craig Fraser of FraserShot started the day. This was really interesting, but the tips I’d been hoping for had only just started, when time ran out and it was on to the next topic.

I try not to be too envious of Judith Lewis of Mostly About Chocolate, but she does get to try a lot of very nice chocolate for her blog reviews. She’s also an expert on SEO and it was this that was the subject of her talk. I only had a vague awareness of what SEO was up to this point and Judith imparted some highly useful information. None of which I’ve yet acted upon!

My chocolate envy was soon assuaged by the workshop I was was most looking forward to. It was not only all about chocolate but more to the point was all about tasting chocolate. Artisan du Chocolat gave us quite a feast of flavours both new and old. Starting with a 100% cocoa bar and working down the spectrum, we sampled one bar after another. Flavoured bars came next with a 40% milk chocolate Masala Chai generally being voted everyone’s favourite followed by Chilli Mole.

Then it was on to the truffles which included lemon & thyme, tobacco (!) and salted caramel. Some appealed more than others, but there wasn’t one I wouldn’t have had a second taste of given the opportunity – not even the coffee! This was not the case for everyone as I did see some grimacing going on and even some chocolate being, not so surreptitiously, spat out.

Our enthusiasm for chocolate led to the programme running behind schedule so Jeanne Horak of Cooksister gave a rather rushed but really useful talk about promoting your blog and finding your own writing style. Michelle of Go Free Foods gave an even more rushed presentation about developing recipes, specifically with food allergies in mind. By this point, I had rather lost the plot and when James Bolton from Derezzed Media held a workshop about WordPress, I switched off. I didn’t manage to regain my attentiveness even for Ben Frazer of Cupcake Artisan and slipped off to catch my train home during his talk on video blogging.

For further info, Catherine Moran of Word Stew has made some useful notes on her Bite n Write post highlighting the key points made by most of the speakers.

In addition to the chocolate, we had some very tasty and attractive cupcakes during the day, lunch (which very nearly didn’t materialise for the vegetarians) and a goody bag to take away with us which included a delicious fresh methi masala curry paste from Bipins and a tin of Steenbergs Christmas Tea.

Turns out this post wasn’t quite as brief as I was intending, but there was so much going on at both events and so many bloggers attending, this only scratches the surface.