Recipe for crisp homemade garibaldi biscuits with a difference. These ones are heavily studded with hazelnut chocolate rather than currants. But please feel free to use the traditional fruit instead. Read on to find out how to make them and also what Garibaldi was up to in Cornwall. 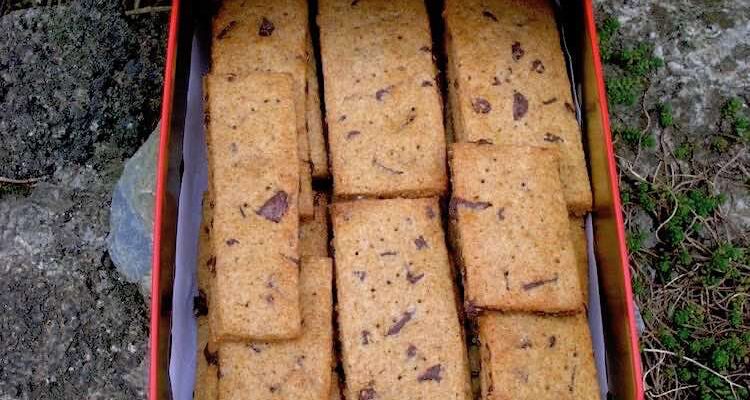 I’m not quite sure why, but when I found out the “special ingredient” for this month’s We Should Cocoa challenge hosted by The KitchenMaid, was fame, Garibaldi was the very first name that sprang to mind.

Giuseppe Garibaldi played a prominent role in the Unification of Italy in 1870, but as far as I remember from my school history lessons, he was THE figure, not just one of them. I suspect he particularly stuck in my mind because of the famous biscuits named after him.

His story seemed rather a romantic one to my somewhat naive mind. What with his famous volunteer army dressed in Red Shirts for want of real uniforms, storming across Italy in a bid for independence and deposing despots as they went.

He was much admired by Victor Hugo, Georges Sand and Alexandre Dumas, all heroes of mine at the time. He did indeed achieve a lot in his lifetime and led an interesting life. You can read more about him here.

I recently found out we have a local connection to him in my part of Cornwall. How very exciting. Trenython Manor, which is not too far from us, was built in 1872. Turns out Garibaldi himself commissioned the architect.

It was a thank you to Colonel Peard, who had supported his Italian Campaign a few years earlier along with the Duke of Cornwall’s volunteers. Indeed, Garibaldi visited the Colonel in Cornwall in 1864 and was greeted by crowds of cheering well-wishers.

What Are Garibaldi Biscuits?

For those unaware of Garibaldi biscuits, they are rectangular, flat, pastry like bakes, heavily studded with currants. They’re a British classic, but are so named in recognition of the limited rations the Red Shirts carried with them.

We used to call them squashed flies when I was young. They were a firm favourite, principally because it was one of the few shop bought biscuits my mother would allow. It must have had something to do with all those currants. I’ve no idea if they’re still made, I haven’t had one in years. In fact I might just have to go down to the shops right now and find out.

My version of garibaldi biscuits is based on the recipe from British Baking by Peyton and Byrne. Instead of currants, I used chocolate. Well why not? But not just any old chocolate: fairtrade hazelnut chocolate. Fairtrade chocolate is something I generally use as a matter of course, but I thought I’d mention it as it is Fairtrade Fortnight at the moment.

I’m sure Garibaldi would’ve approved. I used a mix of half wholemeal flour and half plain. Many shop bought biscuits often have malty notes to them, so I threw in a tbsp of mesquite powder, which I thought would emulate the flavour.

I was pleased to discover that my biscuits tasted like my memories of the real Garibaldis, even though mine were heavily studded with hazelnut chocolate rather than currants. In fact, they were quite delicious and I will most definitely be making them again.

They’re perhaps a little thicker than the originals, but are crisp with the right texture and eminently suitable for dunking. They’re sweet enough, but not overly so with the hazelnut chocolate making a good substitute for the currants. Where better to store them than in a fun new tin I was sent recently.

NB – I did go to the shops and I did find Garibaldi biscuits and I had to buy a packet too. I was annoyed to find that palm oil was listed as one of the ingredients rather than butter. But other than that the ingredients weren’t too bad with currants at 39% being the top one. They weren’t too sweet either and although mine tastes far superior (though I say it myself), they are still not a bad little biscuit.

Now what could be more delightful than to receive a tin full of homemade garibaldi biscuits on Mother’s Day? Well, perhaps receiving the biscuits in this particular tin. The appearance and wording made me laugh as soon as I saw it: FOOD in case of emergency, take a break. It’s strongly reminiscent of those fire alarm fixtures. Indeed hunger can be quite a serious matter in itself.

This tin is perfect for accompanying us down to the plot, where all breaks are very well earned indeed. This is especially true at this time of the year for there is always a lot of hard graft to be done. With its red and black warning colouration, it will be hard to loose in the undergrowth and when an emergency occurs and blood sugar levels plummet, it will be easy to find.

It’s also just about the right size to carry a couple of sandwiches. And maybe some cake which is always welcome on our moorland and coastal walks. Once again emergencies have been known to happen in these situations. Relying on a mobile phone will do no good.

As soon as I got my hands on the tin, I immediately filled it with these chocolate Garibaldi biscuits and we trooped off down the plot. That was one emergency averted – phew!

This recipe for chocolate garibaldi biscuits is my fame entry to this month’s We Should Cocoa, hosted by Lucy of The KitchenMaid. Good old Garibaldi!

Thanks for visiting Tin and Thyme. If you make these garibaldi biscuits, I’d love to hear about it in the comments below or via social media. Do share photos on your preferred social media site and use the hashtag #tinandthyme, so I can spot them.

Will make between 20 to 30 biscuits, depending on size.Substitute currents for the chocolate to make a more traditional garibaldi biscuit.Maca powder would work instead of the mesquite, but neither are actually necessary.Please note: calories and other nutritional information are per serving. They're approximate and will depend on exact ingredients used.