Baked on the stove top rather than the oven, wholemeal spelt Welsh cakes are super easy and simple to make. They’re crisp on the outside, soft and buttery on the inside and incredibly moreish.

END_OF_DOCUMENT_TOKEN_TO_BE_REPLACED

Easter is fast approaching and as it gets ever nearer, my thoughts turn to chocolate, although to be fair, my thoughts are rarely far from this exquisite food of the gods. Over the years I’ve made many Easter chocolate cakes, some more child friendly than others. These ones, containing rather a lot of rum are definitely of the adult variety.

END_OF_DOCUMENT_TOKEN_TO_BE_REPLACED

Spicy Gingerbread with Limoncello Icing and a Giveaway #55

Gingerbread is almost synonymous with Christmas and making some to hang on the tree is something I aspire to each year. This year, I’ve actually done it. Not that we have a tree to hang any on, but I’m hoping that the friends we are giving them to will.

Reading through a review copy of What to Bake & How to Bake It, I noticed a recipe for iced gingerbread cookies that used treacle as a variation. I find the word treacle very hard to resist – something to do with childhood memories of my mother’s treacle pudding, I imagine. Decision made: I would knock up some gingerbread. I followed the recipe almost exactly, adding only a little chocolate (of course) and a few additional spices. A pinch of black pepper for additional warmth was needed I thought as well as some allspice for Vanesther’s Spice Trail and some nutmeg. 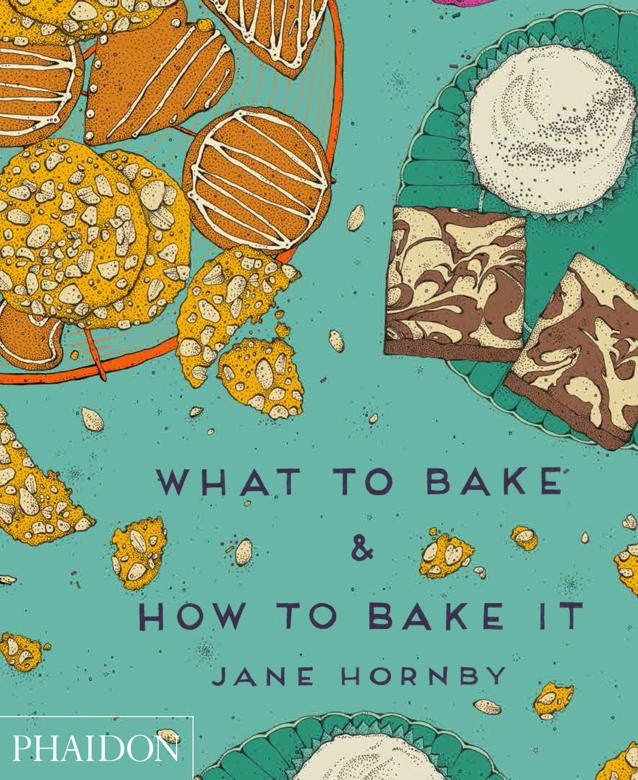 What to Bake and How to Bake It by Jane Hornby (published by Phaidon Press at £19.95), is a rather beautiful book. It’s quite a large hardback and has a turquoise textured paper cover that makes me want to stroke it. Two matching turquoise bookmarks add distinction and there are plenty of gorgeous pictures to admire. It appears to be more a work of art than a manual. It’s certainly a book to treasure.

As the title suggests, this book is aimed principally at those who are new to baking or who require a confidence boost. Each recipe is spread over four to six pages, with lots of step-by-step aerial photography and accompanying instructions. Ah, so it is a manual, albeit a rather lovely one. Methodologies, terms and equipment are covered at the beginning and there are plenty of tips and tricks to be found throughout. Anyone working through a few of these recipes would learn pretty much everything they needed to turn out fabulous, cakes, breads, biscuits, pies and desserts. Despite this, I think the book is also useful to the more experienced baker; most of us still have something to learn. Creating a Swiss roll is one of my bêtes noirs, so maybe I’ll be able to crack it with the steps shown here.

There are fifty recipes in total and although the classics are represented, there is plenty here to keep  the more experienced baker interested and inspired. Shortbread is covered for example, but orange, lavender, pecan and chocolate versions are also given. I have my eye on the malted chocolate birthday cake as I’m a sucker for a malteser and if I hadn’t been ill in the run-up to Christmas, I would have made the pistachio and fig biscotti which sounds exotic and comforting in equal measure. Other bakes that might restore me to health include: blueberry-cinnamon crumb cake, cranberry stollen and Linzer cookies.

The biscuits smelt wonderful, both in and out of the oven and were as warming and delicious as I’d hoped. The touch of limoncello icing gave an added note of sophistication. They may not have looked very sophisticated, but I’m blaming the flu virus for that. CT and I quickly polished off all the rejects and the rest got packed into bags for gifts.

I am sending these biscuits of to Vanesther over at Bangers & Mash for The Spice Trail, which is allspice this month.

Some are also winging their way to Karen over at Lavender and Lovage who has appropriately chosen sugar and spice for this month’s Cooking with Herbs.


Giveaway
Phaidon Press has also kindly agreed to give one of my readers a copy of What to Bake & How to Bake It. To be in with a chance of winning, please fill in the Gleam widget below. You will need to leave a comment on this post, answering the question, which then gives you additional chances to enter if you so wish. Gleam will pick a winner at random from the entries received. If you are commenting anonymously, please give me some way of identifying you as I will be verifying the validity of entries. Any automated entries will be disqualified. This giveaway is only open to those with a UK postal address. Winners will need to respond within 7 days of being contacted. Failure to do this may result in another winner being picked.
Prizes are offered and provided by Phaidon Press and Chocolate Log Blog accepts no responsibility for the acts or defaults of said third party.
Closing date is Monday 19 January 2014

Making an Impression with My Biscuits 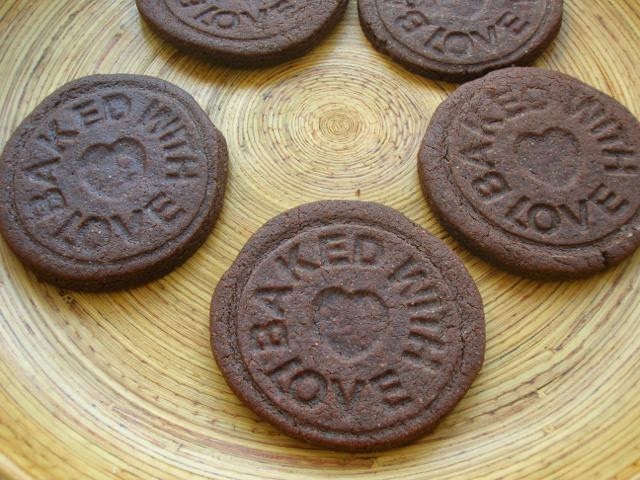 Country mouse heads to town. I’m off to London in a bit of a rush – people to see, places to go, tea to drink and chocolate to eat. This post will go out while I’m there. Before leaving, I need to make something for the friends I am staying with; something that can take a bit of a battering, isn’t  too heavy and won’t take up too much space. Well, there is only one thing I can think of – biscuits. 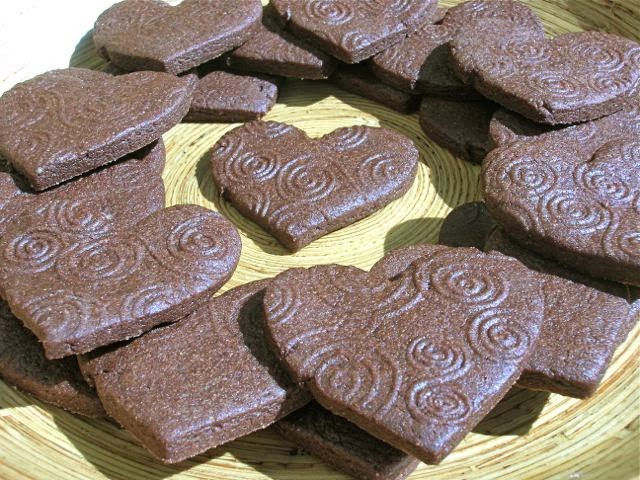 I can’t make just any old biscuits of course, they are a present and need to look a little fancy. It’s time to try out the new textured rolling pin I picked up at The Big Cake Show as well as have another go at using a cookie stamp. I’ve had very little success with these before as the impression has always disappeared on baking. I need a more robust recipe. I know who to go to; Miranda, Queen of Biscuits. I’ve made a few recipes from Miranda Gore Browne’s book Biscuit and I’ve enjoyed all of them. Once again, she hasn’t let me down; there’s a recipe for Irresistible Chocolate Biscuits, a firm biscuit suitable for fancy icing. Well I’m not going to do any icing, but the recipe is meant to produce firm biscuits, so should suit my proposes very well – that’s what I’m hoping anyway.

I’ve pretty much followed Miranda’s recipe but as I want my friend’s children to enjoy them and they aren’t going to have any sweet icing on top, I’m using milk chocolate rather than dark. I’m also adding some allspice – well why not? 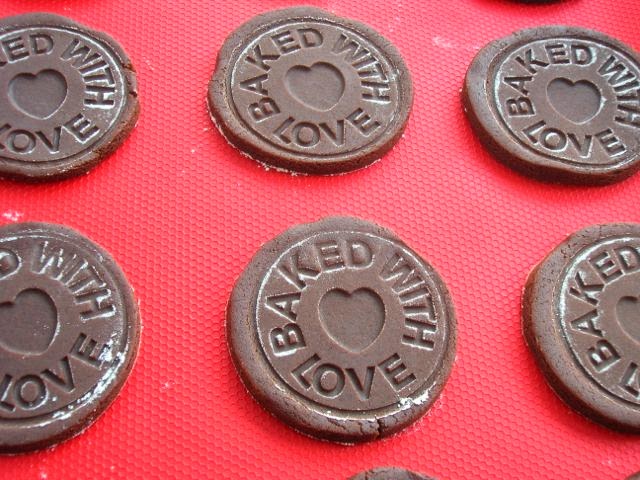 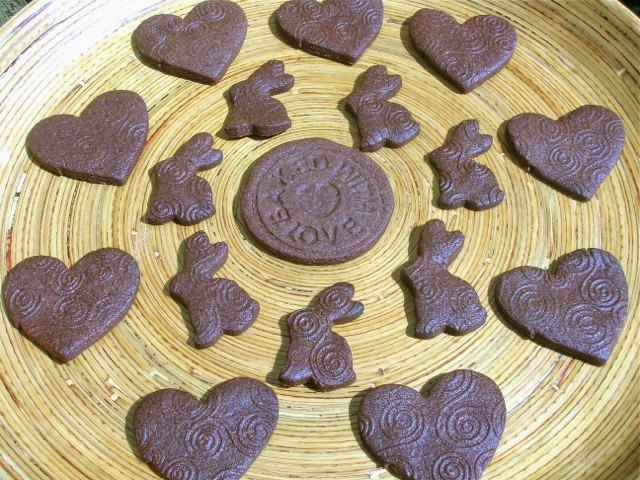 Before I rush out the door and leave the oven on, I better check on those biscuits.

I was half expecting my impressions to look, er, well, not very impressive. But I am delighted to see that this time they’ve held. Well done Miranda. Not only do the biscuits look rather good, I think, but they taste just right too. They have a good firm texture, but thankfully cannot be confused with hard tack. They have a good strong chocolate taste with a spicy undertone. The question is, will they make it all the way to London? I’ll let you know, it’s a long journey and I might get hungry.

As these have now become my favourite biscuits for stamping, I am entering them into The Biscuit Barrel over at I’d Much Rather Bake Than … Laura has chosen favourites as this month’s theme.

I’m also sending them off to Javelin Warrior’s Made with Love Mondays as they were entirely made from scratch.

You can’t go through the Easter period without hot cross buns. They’re traditional! Homemade are, of course, the best. These super delicious choc cross buns are made with a pre-ferment and have a chocolate cross painted on the top.

END_OF_DOCUMENT_TOKEN_TO_BE_REPLACED 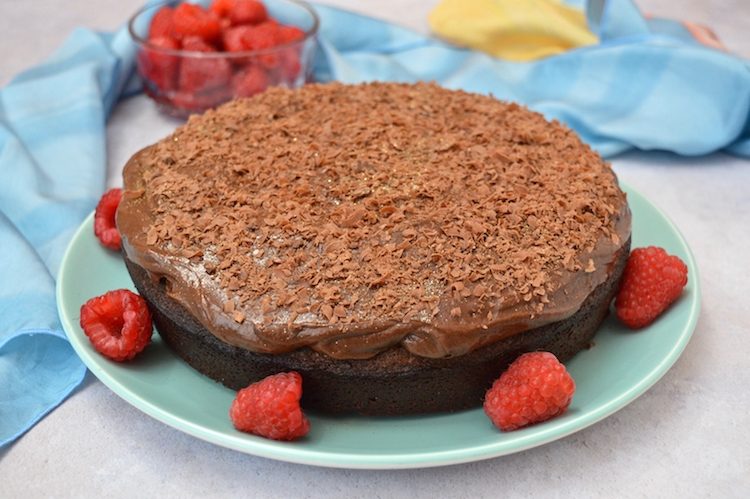 If you’re in need of a chocolate cake that isn’t too rich or too fussy, then this chocolate spice cake is a good one to go for. It’s an easy to make light chocolate cake with spicy notes. You can cover it with chocolate buttercream for afternoon tea or with a spicy whipped chocolate mousse for a special occasion.