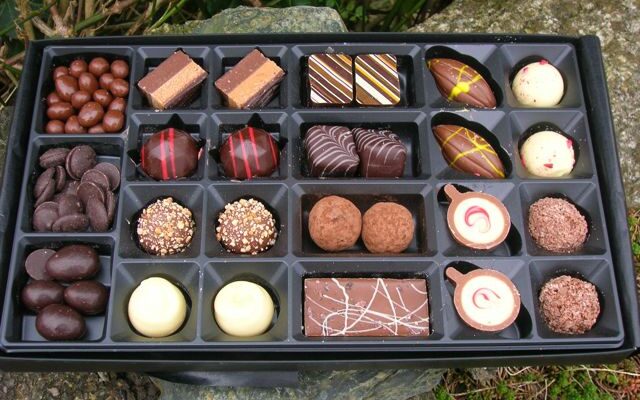 Cocoa Boutique is a new chocolate club offering a monthly selection of artisan chocolates delivered by post. Each month a different selection is offered from a range of chocolatiers who are located in Britain and further afield. The boxes are sturdy and well finished with an elegant appearance. They are designed to fit through standard letterboxes, so need to return home to a delivery note when you’re tired and hungry.  The boxes come with a description of each chocolate and a scoring card which you can use for feedback. 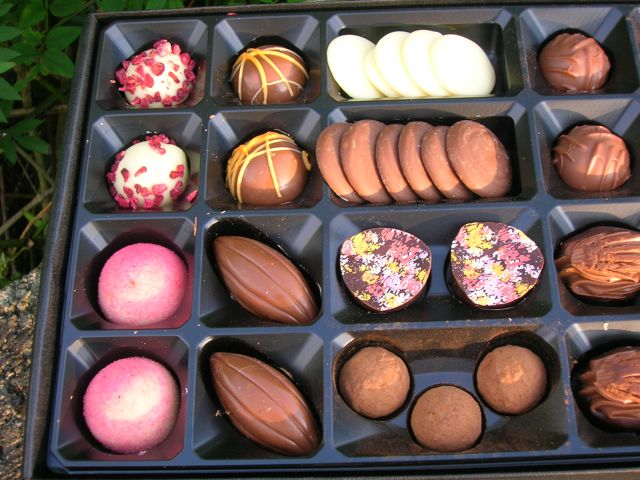 The selection I received for review contained chocolates from chocolatiers Barry Coleno, Pierre Ledent and Claire Hicklin. It was a good mix of dark, milk and white chocolates. There was plenty of contrast: from rich dark chocolate brandy truffles and strong dark chocolate coffee beans to creamy white chocolate buttons and pink champagne truffles. There were two of each chocolate, which theoretically makes it easier to share, although CT might disagree. In addition to these, there were also a handful of white, milk & dark buttons, some coffee beans and some chocolate covered honeycomb pieces. 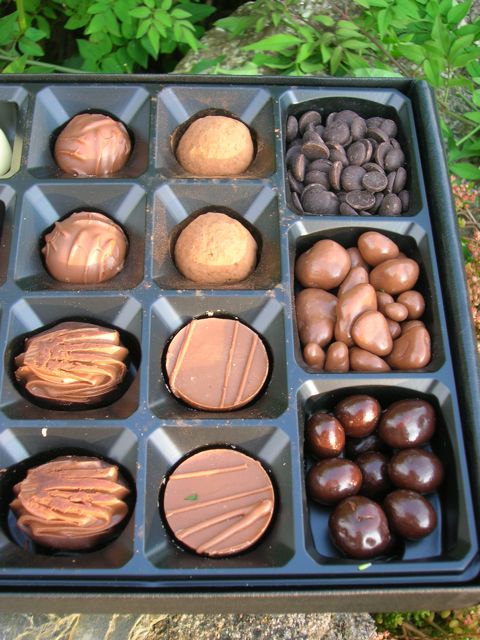 If you like your chocolates teetotal, look elsewhere – there was plenty of alcohol sloshing around in the form of champagne, cassis, rum, brandy and Irish cream; the warming effect from these was welcome as the rain continued to lash down. As a general observation CT and I enjoyed most of these chocolates and found them to be rich, flavourful and not too sweet. The selection was interesting with a good range of fillings, textures, flavours and types of chocolate.

Note to CT. I’d be happy to receive one of these on a monthly basis – assuming you think I’m worth £19.95 a month!

A Few of My Favourites

Others were the interestingly named Pamela, which was an unusual combination of pear and cassis ganache; a milk chocolate truffle which tasted alcoholic, although this wasn’t mentioned in the description; a white strawberry cream which had lovely light mousy texture but was slightly too sweet for me; a pink champagne truffle the flavour of which hit almost before touching our tongues.  It was rich and sweet.

Coffee flavour not being one of my favourites, I left these for CT to try. He enjoyed the Vanilla Irish Cream, found the Rum Cafe Cream pleasant but lacking a distinctive coffee note. Not everything was to his liking, however: the coffee beans had an overly strong smoky and burnt flavour possibly due to over roasting. I tried one and had to agree.

Oh the excitement. The pleasure of an unopened box of chocolates just waiting to be discovered. The expectation is doubled when I don’t know what the box contains. I have, occasionally, been disappointed, but these chocolates were from Cocoa Boutique and I have reviewed them before, so I knew I was going to like them. They arrived rather mysteriously; I was not expecting them and had had no correspondence about it, but I am not one to turn down a box of nice chocolates that has been posted through my door. 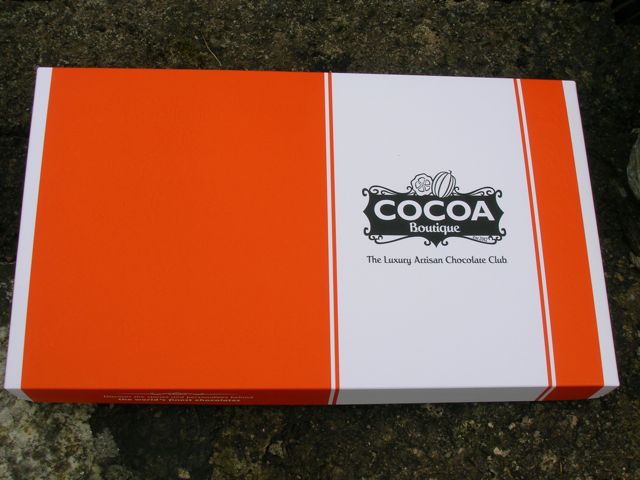 Cocoa Boutique is a chocolate club, so they are set up for parcels that can fit through a letterbox – I wish more would do that: better to be gratified instantly than to have to wait for a redelivery. This box was visually very pleasing and the enticing aroma of chocolate wafting up made me impatient to get stuck in. 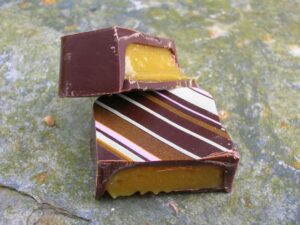 Before even looking at the card to see what flavours awaited me, I followed the visual cues and went straight for the chocolate that appealed to me most. It was the Passion Fruit, a flavour I have a love hate relationship with when it comes to chocolate. Done well, it can be exquisite, but done badly it can taste synthetic and unpleasant. I was relieved to find, this fell into the first category. Paired with dark chocolate, it was sharp, fruity, aromatic and full flavoured, leaving behind a mixture of dark chocolate and passionfruit flavour that lingered on the palate for some considerable time after the chocolate had been consumed. I could quite see why this chocolate by Sun Trigg has won several awards. 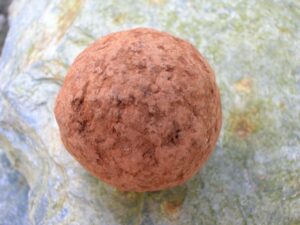 Following this jump into the unknown and my lust being sated for a while, I was a little more restrained with my further tastings. I looked at the guide to see just what I had in store. There were some delicious sounding chocolates and flavour combinations, but my eye fell on the cocoa dusted salted caramel and as I would be addicted to these if my pocket allowed, this was my very next choice. The caramel was a little thicker than I’ve had before, but no less delicious for that and the salt erring towards subtlety brought out the flavour without tasting particularly salty. Note for CT: a box of these would be my idea of bliss. 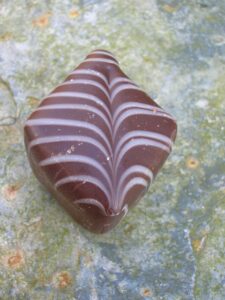 Marzipan – just how I like it. It had a homemade feel and was almondy both in texture and taste without tasting of almond essence and it was not too sweet either. 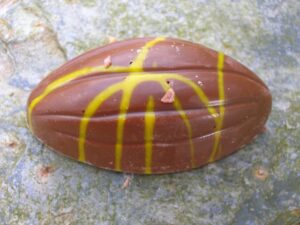 Gazillionaires Shortbread – a fun idea, but sweeter than the salted caramel and like millionaires shortbread, just too sweet for me. 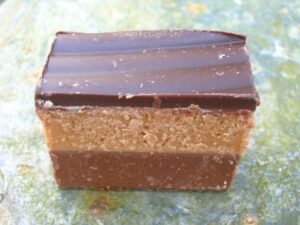 Double Praline – I enjoyed the two different flavours and textures stacked one on top of the other. 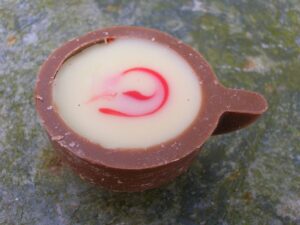 The Frothing Hot Chocolate was not only fun to look at, but contained a bit of a surprise – it was certainly very hot!

Other chocolates of particular note were: the Raspberry Champagne Truffle which tasted of both raspberries and champagne but were a little too sweet for me; a Lemon Meringue Whip which had the flavour of lemon meringue pie, but was also rather too sweet and a very good Cherry Brandy.

All in all, I thought this was a good box of chocolates and I’d be happy for someone to subscribe me to the service for a while – hint, hint! There was a good mix of dark, milk and white chocolate and a varied mix of textures and flavours to make this a box that can be indulged in by one single chocoholic. Why are you looking at me? Or it could be shared out amongst friends and familyas there should be something here to suit everyone’s taste.

I have a number of chocolate reviews on Tin and Thyme. The easiest way to find them quickly is to look at my reviews page.