It’s my birthday next week and in true birthday tradition I have to bring in cakes to work. What to make? Last year I think I did a strawberry and cream cake along with Expresso cupcakes. Cupcakes are good because they travel well, don’t need cutting and are easy to eat in a work situation. This time I plumped for Night & Day cupcakes from How to be a Domestic Goddess.

This year there is the added challenge of having a vegan in the team. It just so happens there is a recipe I’ve seen in Divine that I’ve been saving up for just such an occasion – Balsamic and Chocolate Cake. I’m a little bit nervous about this – a cake without eggs?
Vegan Chocolate Cake 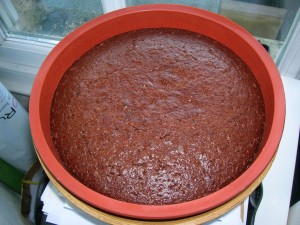 I needn’t have worried, the cake was delicious. It rose well, had a moist yet light texture and had a rich chocolatey taste with a slight balsamic twist. It was just as delicious two days later! I was advised by my vegan colleague that silken tofu mixed with melted dark chocolate makes a good cake topping so I might try that next time.
Night & Day Cupcakes