As usual, my ambitions were way bigger than my abilities, so I didn’t manage to do quite as much as I was hoping. I did, however, put a few hampers of varying sizes together to give as gifts for Christmas this year – oops I mean last year! Vanessa Kimbell’s wonderful Let’s Make Christmas event inspired some of these and do follow the link to find many more ideas for home made foodie gifts. I’d wanted to decorate the boxes to make them look suitably festive, but ran out of time. Luckily, I don’t think anyone minded.

This is what I made: 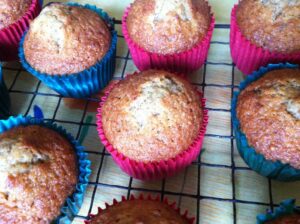 Butterscotch Banana Cupcakes – another winning Dan Lepard recipe from Short & Sweet. I made these for the tool hire boys next door, who uncomplainingly take in our parcels when we’re not at home and let us know when something has been delivered. 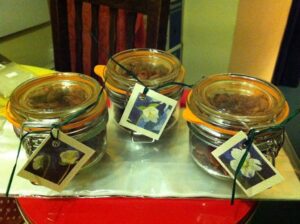 Candied Nuts – I was lucky enough to take home a jar of candied pecan nuts from Jaynerly at Let’s Make Christmas. I was so taken with how good they were that I had to make some for the hampers, although mine were mixed nuts. Not having any maple syrup to hand, I used date syrup instead. Fortunately, it worked really well.

Candied Orange & Lemon Peel – very nice to snack on and also perfect for cooking as it is infinitely better than the mixed peel you buy in tubs. This time I peeled the fruit first, which made for a tidier result, but left me with a lot of orange and lemon flesh that I didn’t really now what to do with. I also used star anise in the syrup and coated the peel slices in caster sugar after I’d drained off the syrup. I’ve just made another batch for my own consumption.

Chilli Sauce – our chillies ripened much better this year than they did last, which meant we got a good hot chilli sauce with a gorgeous orangey red colour.

Chocolate Mincemeat – I made some mince pies with this and they were certainly the best I’ve tasted this year. I’m hoping the recipients think the same.

Glitzy Chocolate Mendiants – were the items I was most pleased with. Despite having a chocolate blog, I’m really nervous about working with chocolate in it’s pure form as I have not yet mastered tempering. Thankfully, the chocolate behaved itself this time. 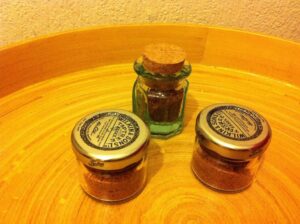 Mixed Spice – I’d never thought to make up my own mixed spice before. I don’t know why not as I make up various curry mixes. But I got the idea to do this from Karen’s amazing blog, Lavender and Lovage. I used star anise, cardamom, black pepper and coriander as well as the standard cinnamon, allspice, cloves and nutmeg that you would expect.

Orange Liqueur – another recipe taken from the creative Karen of Lavender and Lovage.

Orange Shortbread – I doubled my standard shortbread recipe omitting the cocoa and adding organic orange zest to the mix. I wanted to use my “home made” stamp for something and these seemed the most suitable candidates.

Polish Spice Biscuits – another of the amazing Let’s Make Christmas gifts. This time from the fabulous Ren of Fabulicious Foods who iced hers most beautifully. 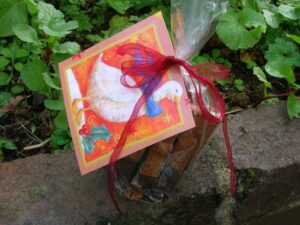 Pumpkin Spice Syrup – I forgot to take a picture of this one, but it was delicious. We liked it as a drink with hot water, my mother used hers over ice-cream. I have  Hannah of Home Baked to thank for this one.

Spiced Apple Chutney – this is Nigella’s recipe in How to be a domestic goddess and it’s a lovely one which I make every year. This year I made two lots, one for us and one to give away.

Wee Dundee Cakes – I’d been wanting to make some miniature Christmas cakes, but wasn’t sure what recipe to use. As soon as I saw these over at Lavender and Lovage, I was hooked.