Do you love real food? If so, why not put forward your food herbs for the BBC Food and Farming Awards ? Nominations close at midnight on Monday 27th January. If you haven’t already done so, time is of the essence, so please do hurry to nominate your food heroes or you’ll have to wait for another year. 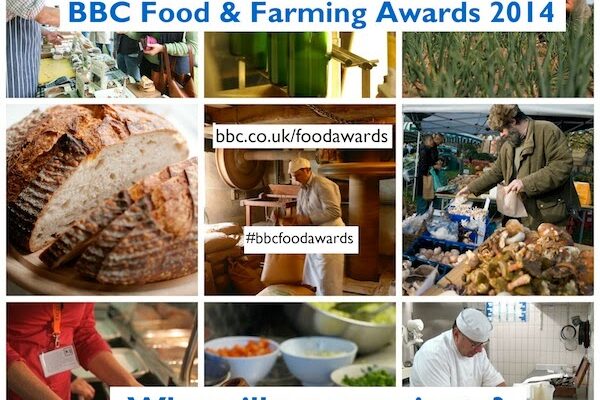 I’m passionate about real food and I’ve listened to Radio 4’s Food Programme almost since it started, way back in the 70s. The awards were launched fourteen years ago and have been gathering strength and kudos ever since. Now they’re the most valued and prestigious awards in the world of UK food.

I’ve been following the stories of those previously shortlisted as well as the winners on the Food Programme and have found them all deeply moving. They offer much “food” for thought.

Over the fourteen years these awards have been running, I’ve nominated any number of local businesses that I thought were offering fantastic food and fantastic service. I’ve also put forward a few names who I rate for the sterling work they’ve done in promoting real food.

One such was Andrew Whitley. He’s made and continues to make a huge contribution to putting real bread back on the British table. Since his book, Bread Matters, published in 2006, TV programmes, real bread bakeries, publications, community bakers and blog posts have been springing up all over the country, in fact all over the world.

Andrew was instrumental in setting up the Real Bread campaign in 2009. I joined that year whilst I was on one of Andrew’s bread making courses. Those who follow me on Twitter will know from my handle that I’m a keen advocate. In 2011, one of my nominations finally made it through and Andrew won a Special Judges Award. Hoorah!

Sadly chocolate has not yet featured in these awards, but I live in hope that one day it will. I’m not sure if posthumous nominations are allowed, but I have put forward Mott Green for the adventurous and ethical work he did in setting up the Grenada Chocolate Company. His tragic death just before the Food Programme aired its broadcast, the chocolate world of Mott Green, could not have been more untimely.

This year, things have been revamped slightly, following a “year off” in 2013. There are ten categories open for nominations and you can find out all about them on the BBC Food Programme page.

The producers are particularly keen to get nominations for BBC Cook of the Year. This is a category for those cooks who are challenging the perceptions of canteen food and creating tasty, healthy meals on a budget in our schools, hospitals, care homes and workplaces.

Amongst the line-up of star judges, we have our very own food blogger Jack Monroe this year. Star judges include Raymond Blanc, Valantine Warner and Tim Hayward. The winners will be announced at the annual BBC Food and Farming Awards ceremony held in Bristol on May 1st. The winners and finalists will also feature on a subsequent Food Programme broadcast.

The BBC, nor anyone else has offered me any incentives for writing this post. I do so because I passionately believe in Real Food and hope that my readers do so too.