Free from egg, dairy, wheat, gluten and refined sugar, this is a rich and flavoursome coconut chocolate cake made with chickpea flour. It’s pretty healthy as far as cakes go. Think chocolatey but not too sweet with a dense but satisfying texture. 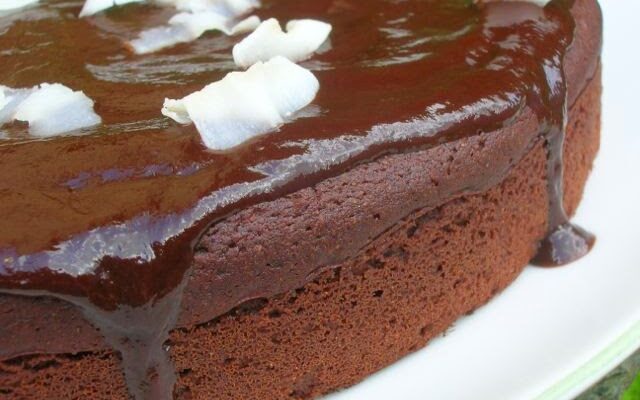 The theme of this month’s Clandestine Cake Club was free as a bird. I have to say, I was somewhat stumped by this and the best I could come up with was a free to make whatever I liked cake. The theme for this month’s We Should Cocoa is gluten free, so that got me wondering. I’d also been sent some coconut oil and coconut nectar to use from Cocofina. You can find the review in my tropical smoothie post. Suddenly it all clicked into place and I would do a free from cake – free from gluten, free from dairy, free from eggs and free from sugar (sugar in the everyday sense anyway).

Last month’s We Should Cocoa was my inspiration. It included chocolate chickpea cupcakes from Janet over at The Taste Space, which I found rather intriguing. It just so happened that I had a bag of chickpea flour in the cupboard that was waiting for just the right opportunity. This was it, my gluten free cake would be made from chickpea flour. I was also rather pleased with my £1 chocolate cake, so thought I’d go to the other extreme and make a very expensive cake, but one inspired by that one.

When I found out that our Cornwall Clandestine Cake Club meeting was at The Baking Bird in Truro, I realised why the bird theme had been chosen. You can see from the picture that other interpretations of the theme were a little more sophisticated than mine. The cafe come bakery was spacious and attractive with a fabulous view of the next door cathedral spires from the upstairs windows. As well as eating far too much cake, we had a quick masterclass in rose piping on cupcakes. I was somewhat miffed that CT did a near perfect one at his first ever attempt at piping, whereas mine was much less successful. Still, at least I got to eat my mistake. To complete the bird theme we tweeted furiously for Cornwall Hour – when cake munching allowed. Thanks go as always to our excellent CCC organiser Ellie Michell for another splendid event.

I was a little concerned that the chickpea flour would make the cake overly bitter; it certainly seemed quite bitter when I tasted it raw. Luckily the cooking process transformed it. In CT’s words it was a satisfying cake: rich, filling and not too sweet. The chickpea flour gave it a very distinctive taste, but not an unpleasant one. The coconut flavour came through and gave the cake a certain unctuousness which prevented it from sliding into 70s whole food worthiness.

Thanks for visiting Tin and Thyme. If you make this gluten-free coconut chocolate cake, I’d love to hear about it in the comments below or via social media. Do share photos on social media too and use the hashtag #tinandthyme, so I can spot them.

If you’re interested in other gluten-free bakes, I have a few recipes in my Gluten Free category.

Most of us now know someone who is gluten intolerant so widening our baking repertoire in that area can only be a good thing. Thanks to Michelle of Utterly Scrummy Food for Families for coming up with the gluten free theme and hosting We Should Cocoa this month. You still have over a week to go if you’d like to join in.

I’m entering this coconut chocolate cake into AlphaBakes where the letter is D this month. With my use of 100% chocolate I am going for D for Dark chocolate. Hosted alternately by Caroline Makes and the More Than Occasional Baker.

I’m also sharing this gluten-free coconut chocolate cake with Helen of Casa Costello for her Bake of the Week.