These little rhubarb pudding fairy cakes are so named because they are pudding like in texture rather than light and airy. But they’re also fairy like in terms of their size and the ephemeral and elegant nature of the edible flowers. Whatever you want to call them, they’re totally delicious. 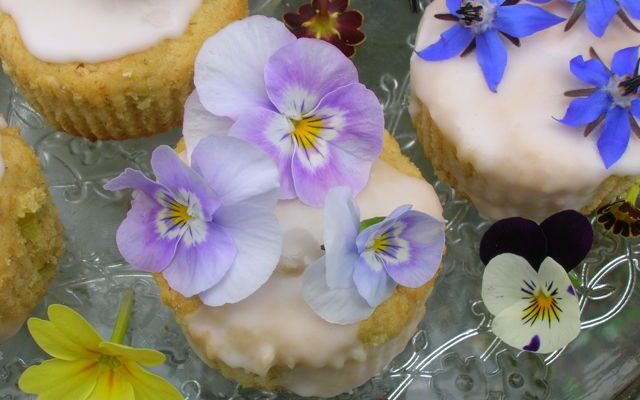 Spring, it’s really here at last. Despite the rubbish weather we’ve been having, the hedges are alive with primroses. They’re slightly later than usual but absolutely spectacular.

Talking of spectacular flowers, I was recently given a punnet of edible ones from a local grower. The Flower Mill, based just up the road from us (in an old flour mill as it happens), grows chemical free flowers for decoration and also for eating.

It’s primarily a mail order business, so anyone in the UK can enjoy bouquets and posies of seasonal Cornish flowers. They can also order edible flowers to decorate cakes, salads or whatever else grabs their fancy. My punnet contained a collection of borage flowers, violas and different types of primulas. What fun. It’s time to play.

Kate has chosen fairy cakes, cupcakes and muffins for this month’s Tea Time Treats. And fairy cakes seemed just the thing to showcase the beautiful flowers I’d received. As I like to bake seasonally where I can, rhubarb was an obvious choice.

Now, I don’t know why, but for some reason we’ve been unable to grow rhubarb down at the field. It used to flourish on our old site. Luckily, my mother grows some in her garden, so it was all systems go.

Whilst the cakes were cooking, I stewed up a few stems of chopped rhubarb without sugar. I thought they’d make a beautiful pink juice for the icing. And they did.

Due to the almonds, these veered more towards the dense texture than light and spongy, but, oh, they were delicious. Rhubarb is one of those ingredients that works particularly well in cakes, giving bursts of tartness and flavour in amongst the sweetness.

The rhubarb juice gave the icing a tinge of pink which I was pleased with. I used the remaining stewed rhubarb in a breakfast smoothie the following day and it was so good I’m now craving more.

As it happened, the cake cases came away from the cakes, making them look really tatty, so I removed them all together. Thank goodness for the flowers, which made these otherwise plain looking cakes into the real deal – fairy cakes of elegance and beauty. The flowers all had their own flavours and were not only good to look at but were good to eat too.

In retrospect I regret not putting some of them into ice-cube trays, but I shall remember that for another time. Cool summer drinks would surely be enhanced with a flower or two floating on the surface.

I was told that the flowers can be kept for 2-3 days in the fridge, but I was surprised at just how long they lasted out of the fridge and on the cakes – it was several hours before they showed any sign of wilting.

You can check out the range of options available at The Flower Mill.

Thanks for visiting Tin and Thyme. If you make these rhubarb pudding fairy cakes, I’d love to hear about it in the comments below. And do please rate the recipe. Have you any top tips? Do share photos on social media too and use the hashtag #tinandthyme, so I can spot them.

If you’d like more cupcake recipes, follow the link and you’ll find I have quite a lot of them. All delicious and nutritious, of course.

I am entering these rhubarb pudding fairy cakes into Tea Time Treats with Kate of What Kate Baked.

As edible flowers abound, I am also entering these little cakes into Herbs on Saturday with Karen of Lavender and Lovage. It just so happens that this month’s prize is Cooking with Edible Flowers.

The rhubarb cakes would go down a treat I reckon for a St George spring fete. So I’m also entering them into Calendar Cakes with Dolly Bakes and Laura Loves Cakes.

As I’ve made everything from scratch as usual, I’m sending these off to Made with Love Mondays with Javelin Warrior.

And finally, because rhubarb is in season and I haven’t submitted anything for ages, I’m entering these into Simple & in Season with Ren of Fabulicious Food.