When the world gives you apples, what can you do but bake a triple apple cake? This one is made with apples, cider and apple butter and it has the bonus of being low fat. If you can’t get hold of apple butter, apple purée will work too. Flavour it with orange and you have a cake fit for anyone, especially on a cold winter’s day. 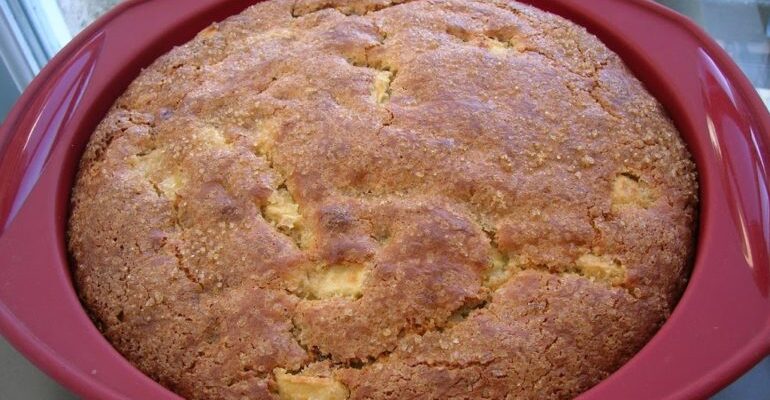 I wanted to enter something for Julia’s Snow Day Bake Off, but as we still haven’t had any snow here, I didn’t have a picture to send in.  I made a cake anyway and then the frost came – no snow, but lots of frost.  I’ve been waking up to a white roofed town every morning for the last few days.  So I now feel I can submit this triple apple cake recipe, even if it wasn’t taken on a particularly white day.

The weekend before last, I spent three and a half hours stirring apple puree to make apple butter. It’s a labour of love I’m not sure I’ll repeat. Although, I must say, the result was rather a good one.  Now I have a few more jars sitting in my kitchen with nowhere to go. This is because my store cupboard is already over full.  I’ve given one away and we’ve been eating apple butter on toast. But how about using some in a cake I thought?

It was Wendy from the Omnivorous Bear who got me in to the whole apple butter thing in the first place and I had a vague recollection that she had made a cake with hers. Indeed she had and a very nice cake it sounded. One of the points of using apple butter in a cake is that you can substitute it for fat. That’s the theory anyway. Wendy had reduced the oil in her recipe rather than eliminating it all together, which sounded very sensible to me.

So without looking further I adapted her recipe in a number of ways, but mostly to include chocolate and flavour it with orange rather than vanilla. And I used spelt flour, my favourite flour for baking cakes.

The cake rose beautifully.  It was light, moist, not too sweet and had a lovely crunchy top. It tasted really good with the apples predominating as you might expect with this much apple. But the orange flavour kicked in soon after. The chocolate chunks were oases of sweetness in the surrounding fruitiness. One week on it tasted just as good. It went very nicely with clotted cream – but what doesn’t?

Thanks for visiting Tin and Thyme. If you make this triple apple cake, I’d love to hear about it in the comments below. Do share photos on social media too and use the hashtag #tinandthyme, so I can spot them. And let us know what your favourite toppings are.

Delicious served warm with cream for pudding.Please note: calories and other nutritional information are per serving. They're approximate and will depend on exact ingredients used.