Spanakopita is a delicious Greek filo pastry parcel or pie stuffed with wild greens and feta cheese. These ones are formed into individual triangles with crisp crackly pastry on the outside and a chewy, salty, fresh tasting inside. The greens in this filling are mostly nettles and three cornered leeks. 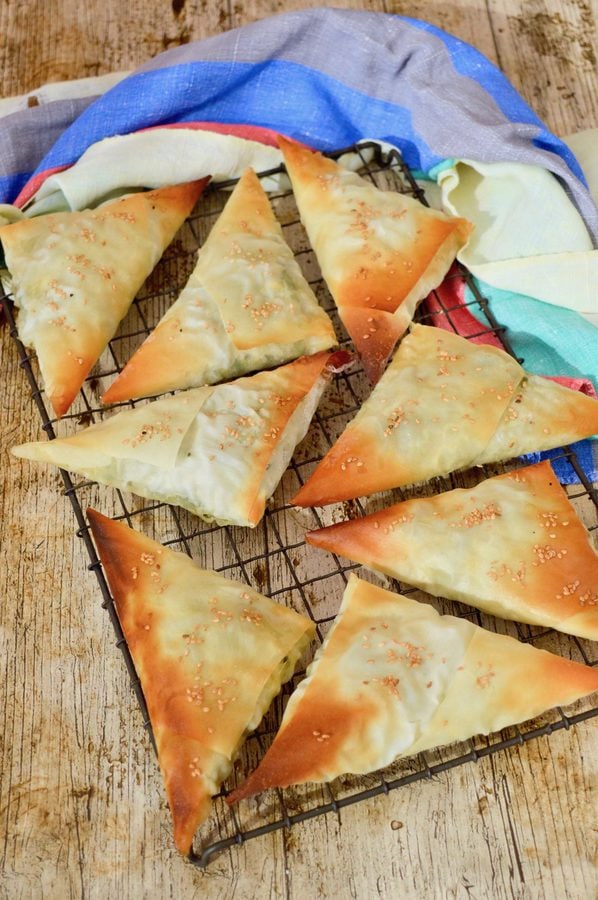 Stinging nettles are all the rage these days and if you haven’t managed to eat any yet, you’re missing a real treat. You’ll find plenty of recipes for this super nutritious green online. I have quite a few myself. But there are plenty of other delicious wild greens out there. Wild garlic is one of my favourites, but actually three cornered leek is pretty good too.

It’s important to wash any wild greens your forage really well. This is especially true if you’re going to eat them raw. The greens are cooked in these spanakopita, but you still don’t want to include any dirt or little creatures by mistake.

Three cornered leek (Allium triquetrum), however is much less known as an edible weed. Even though it seems to grow everywhere. It’s a non-native invasive plant, so don’t worry about picking it. It emerges from winter dormancy in the early spring and it’s best to pick the greens before or just as the flowers appear. You don’t want to leave them until they get tough. In New Zealand and Australia, it’s known as onion weed. 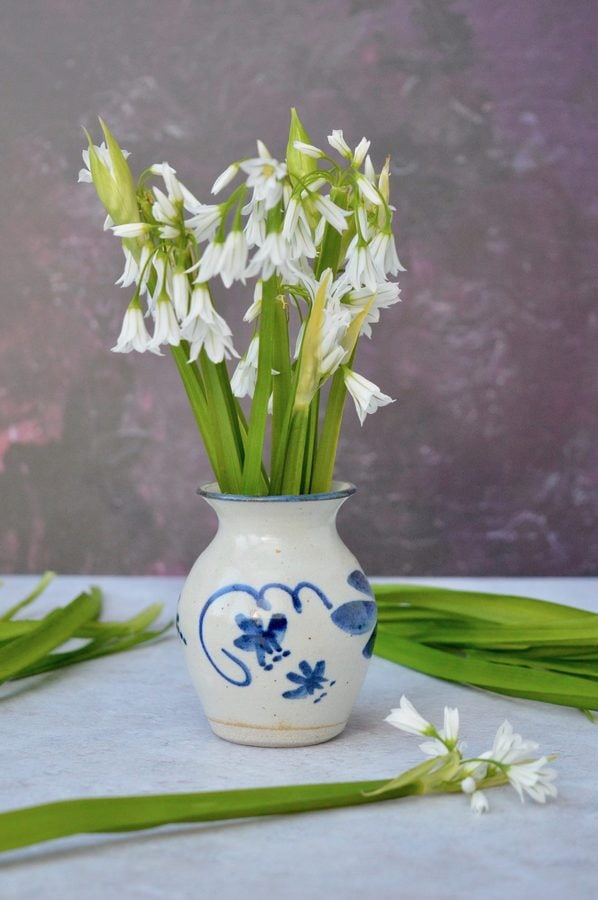 It has a mild onion flavour, quite similar to leek and a distinctive triangular flower stem, hence its name. You can use bunches of the leaves as I’ve done in this spanakopita recipe and they won’t overpower the dish.

For more information on the three cornered leek and for identification, Wild Food UK has a useful page on it.

You can make spanakopita with pretty much any greens you like. Most spanakopita recipes these days call for spinach. But traditionally, Greeks make it with wild foraged greens. They’ll be different ones used according to the seasons. I’ve made them with good old spinach plenty of times before, but also with homegrown orach. If you’re interested here’s one of my variations: spinach filo pastries with goat’s cheese and chocolate. Yes chocolate. It works a treat in lots of savoury recipes.

You can use any combination of wild greens or spinach type leaves that you like. Wild garlic would be a good substitute for the three cornered leek, although you might want to have more nettles and less wild garlic as it can be quite strong. 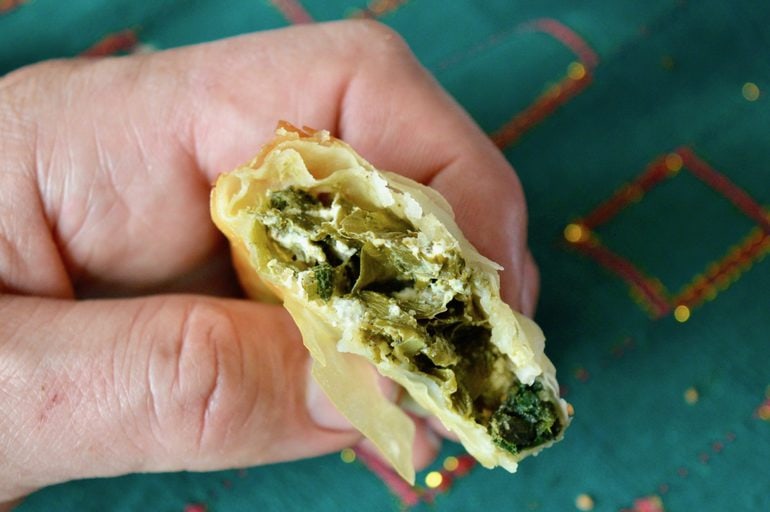 These ones with nettles and onion weed are the best yet. They taste really fresh and vibrant. The mint helps with this too and we continued to experience that feeling of freshness in the mouth for at least an hour after we’d eaten them. We demolished rather more than was seemly for lunch. But really, they’re very hard to resist.

The amount I’ve given in the recipe should make between twelve and fourteen well stuffed spanakopita parcels. Eat warm, rather than piping hot, although they’re also good at room temperature. They’re at their best though about ten to fifteen minutes after they come out of the oven. 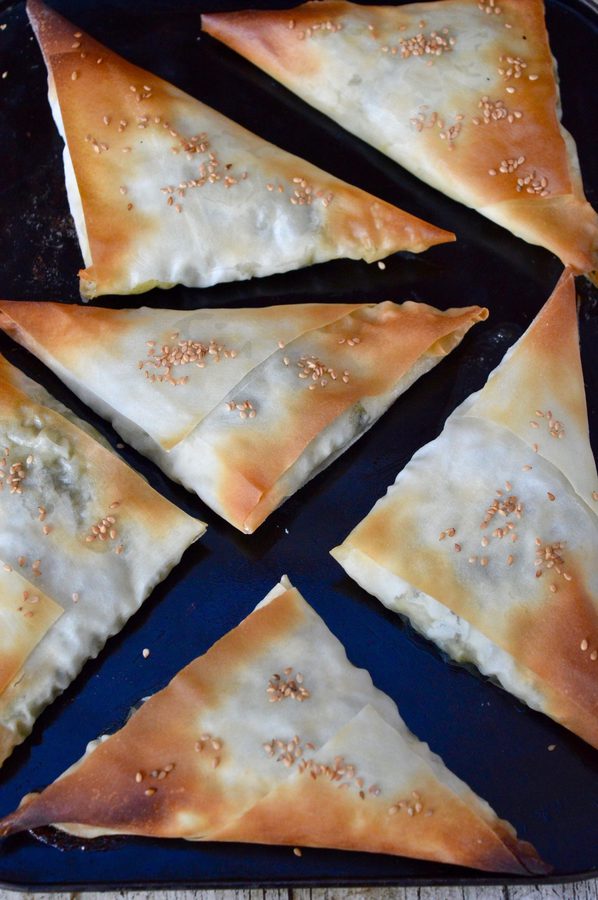 You’ll need to cook the nettles first, but once that’s done, it’s just a case of mixing all the filling ingredients together. It’s important to chop the three cornered leek as finely as possible so that it cooks in the pastry parcels. But don’t try and puree it. Spanakopita just wouldn’t be the same with a soft mush inside. You need a bit of texture and something to chew on to appreciate the flavours. And wow, do they taste good.

The main point to remember with spanakopita is that you don’t want a wet filling. If the filling is wet, you’ll get soggy pastry at best or at worst, the pastry might collapse altogether. So make sure you squeeze out any excess water from the cooked nettles. And dry the three cornered leeks well after you’ve washed them.

If you like your food well seasoned, you may want to add more salt, but the feta cheese is already quite salty, so be careful.

It’s important when you work with filo pastry to keep any sheets you’re not currently using covered. If it dries out, the sheets will tear and become impossible to work with. Cut the sheet your working on to size, then brush immediately with oil. I find folding the sheet and then running a knife along the crease works best.

You can create whatever shape of filo parcel you like, but I find triangles the easiest and neatest. It’s rare for the filling to escape and you get extra crunch from all those corners. If you’ve never done this before, don’t be put off, it’s a lot easier than it may seem. Here’s a visual guide on how to do it.

Can I Just Use Spinach?

Well actually spinach is a fine green to use and it’s easy to get hold of. It’s generally available for sale all year around, so you don’t have to wait until spring to make these spanakopita. Just cook the spinach lightly in only the water it’s washed in. As I’ve done with the nettles. Just ensure you drain it well. You really don’t want a wet mixture going into the filo parcels.

Alternatively use frozen spinach. Defrost it first, then squeeze out any excess moisture. You don’t need to cook it first.

If you use spinach as the only greens in this spanakopita recipe, it’s best to fry up an onion or a leek to go into the mix. And you might want to add some garlic too. Obviously, with all the three cornered leeks in these ones, no extra type of onion is needed.

Can You Freeze Spanakopita?

Baked spanakopita will last in the fridge for 3-4 days. Just place them in a hot oven for ten minutes or so for the filling to heat and the pastry to crisp up.

Likewise, you can freeze the cooked spanakopita for up to a couple of months. Just place in freezer bags when cool and pop into the freezer. When you’re ready to eat them, defrost and then bake in a hot oven for ten minutes or so. The filling should be properly heated through and the pastry crisp.

Alternatively, you could freeze the filling until you’re ready to make the spanakopita.

Thanks for visiting Tin and Thyme. If you make these spanakopita, whether it’s with nettles, three cornered leek or any other sort of greens, I’d love to hear about it in the comments below. Do share photos on social media too and use the hashtag #tinandthyme, so I can spot them. 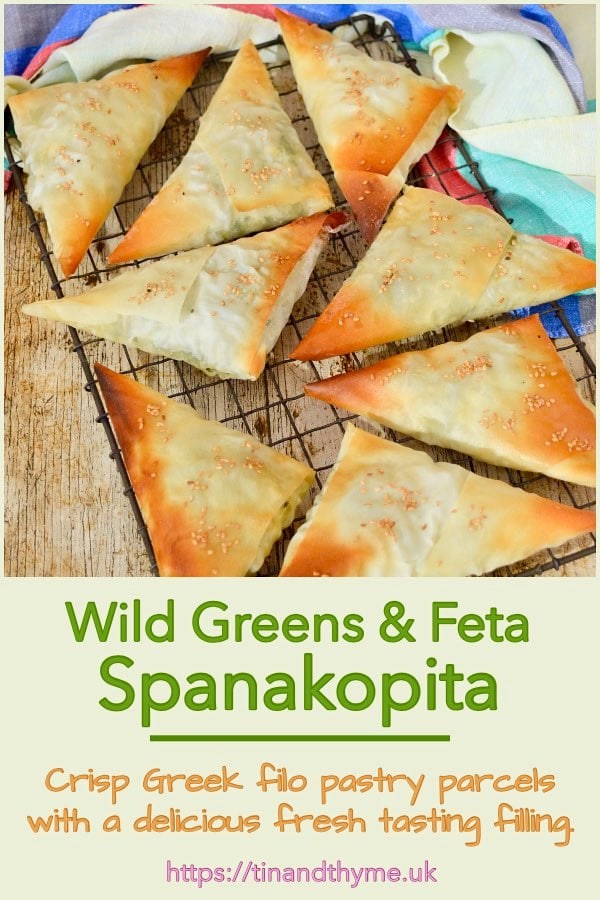 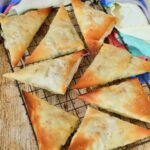 You can use any combination of wild greens or spinach type leaves that you like. Wild garlic would be a good substitute for the onion weed. Eat warm, rather than piping hot, although they're also good at room temperature. They're at their best though about ten minutes or so after they come out of the oven. If you like your food well seasoned, you may want to add more salt, but the feta cheese is already quite salty, so be careful. Please note: calories and other nutritional information are per serving. They're approximate and will depend on exact ingredients used.

I’m sharing these nettle and three cornered leek spanakopita with Apply to Face Blog for #CookBlogShare.