A delicious light velvety smooth nettle soup. It’s perfect as a spring cleanser. Don’t tell what’s in it and you can keep everyone guessing as to the mystery ingredient. 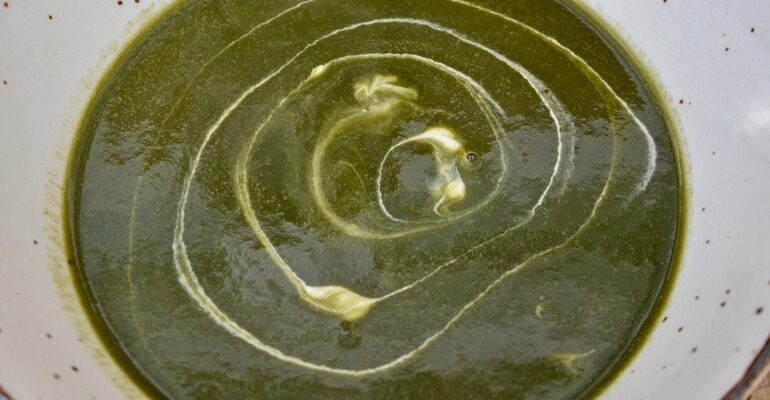 When spring finally emerges, I like to banish lethargy and listlessness and that’s when I start to crave the vitalising, cleansing effect of nettles. I normally have my first bowl of nettle soup in March, but I was a bit late in foraging any from our plot this year. When the day dawned bright and fair on Sunday morning, I was determined to go nettle picking – and I did.

Nettles as Medicine and Food

Nettles have been used both as a food and as medicine for centuries. They’re said to stimulate the digestion and purify the blood. Our ubiquitous stinging friends are rich in vitamins A and C as well as trace minerals: iron, potassium, manganese and calcium. The young nettles emerge in spring and this is the best time to gather and eat them. They taste a bit like spinach, but nicer. 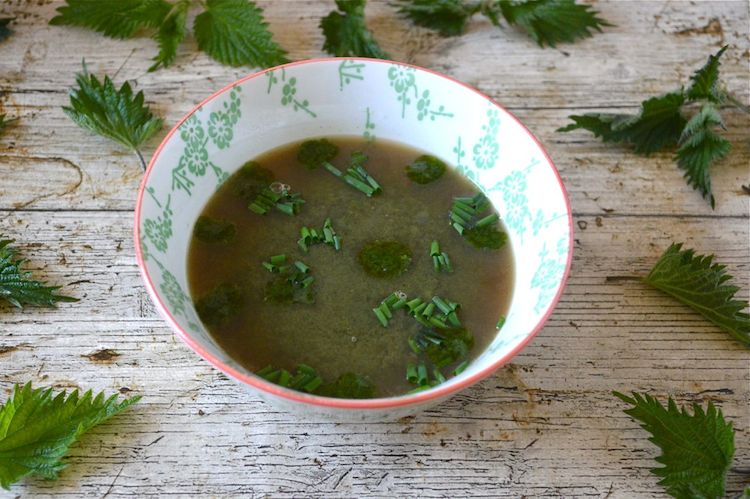 Nettle soup is the easiest and most common way to consume this stinging weed. Don’t worry, it won’t bring you out in a rash. When nettles are cooked, they lose their sting. At this time of year, I use them as a general spinach substitute and add them to all sorts of dishes, including stir fries, quiches and curries.

I know nettles are not to everyone’s taste, but I suspect not many would turn down a bowl of this soup, especially if they didn’t know what it was made of. My mother has surprised visitors on many an occasion over the years by revealing what the soup was after they’d consumed and enjoyed it.

For most purposes, it’s best to take only the nettle tips when foraging as these are the tenderest. Older nettles and leaves can be tough. I tend to take the top 4-6 leaves. Unless you’re happy to grasp the nettle firmly and pick them with your bare hands in CT fashion, it’s best to where rubber gloves or snip them into a basket with a pair of scissors. 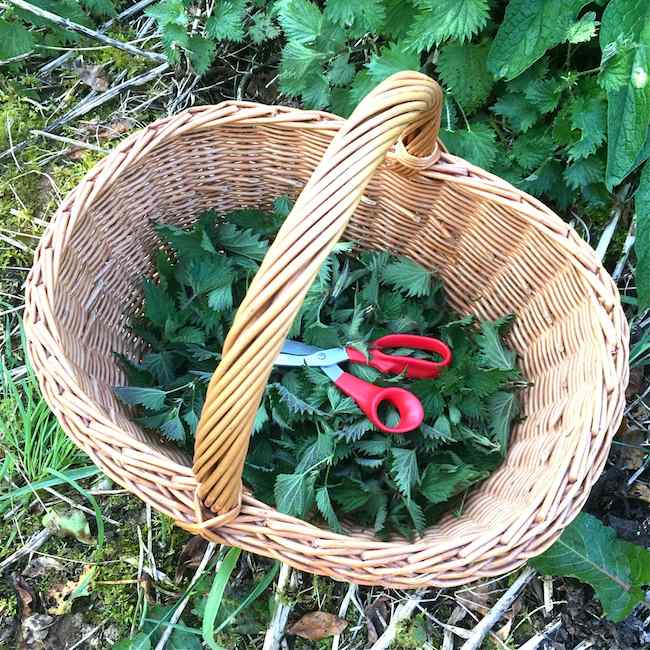 The soup is quick and easy to make. Fry up an onion, a leek, garlic and a potato, then add the nettles and water. Simmer for 15 minutes or so, then blitz with a blender.

I used my Optimum G2.3 platinum series induction blender which turns out a particularly smooth soup. Whatever you use though, you should find the nettle soup has a lovely velvety mouth feel. I make this soup dairy free as I like to think of it as a spring tonic. But you could always use butter instead of oil and add a spoon of yoghurt or crème fraîche at the end to make it a bit more special. 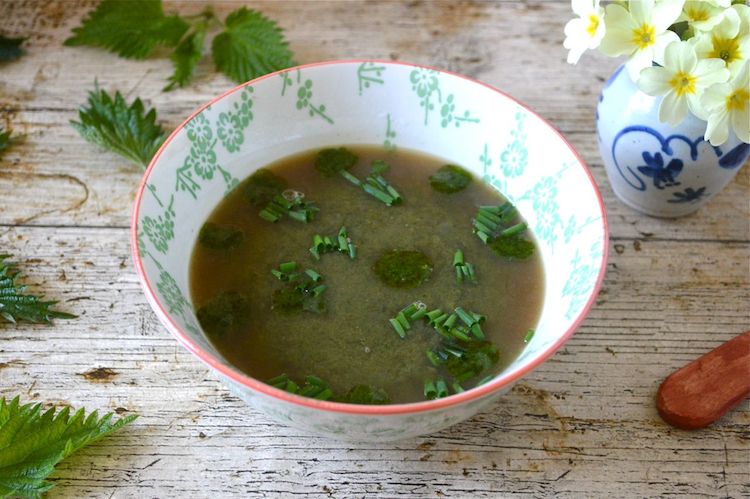 It’s hard to see from the photos, but I gave a bit more pizzaz to this nettle soup by drizzling a little wild garlic oil over it when serving. Wild garlic oil is fantastic and I’ve been using it a lot since I spotted a recipe for it at Food to Glow a few weeks ago.

If you have a soup maker or Froothie Evolve power blender, you can omit the frying stage. Just add all ingredients except the oil and follow the soup making instructions. In the Froothie Evolve I use the smooth soup function and it takes thirty minutes. The end result is so smooth and delicious, we don’t miss the oil at all. In fact, that’s how I now make it every time.

Thanks for visiting Tin and Thyme. If you make this spring tonic nettle soup, I’d love to hear about it in the comments below or via social media. Do share photos on your preferred social media site and use the hashtag #tinandthyme, so I can spot them. 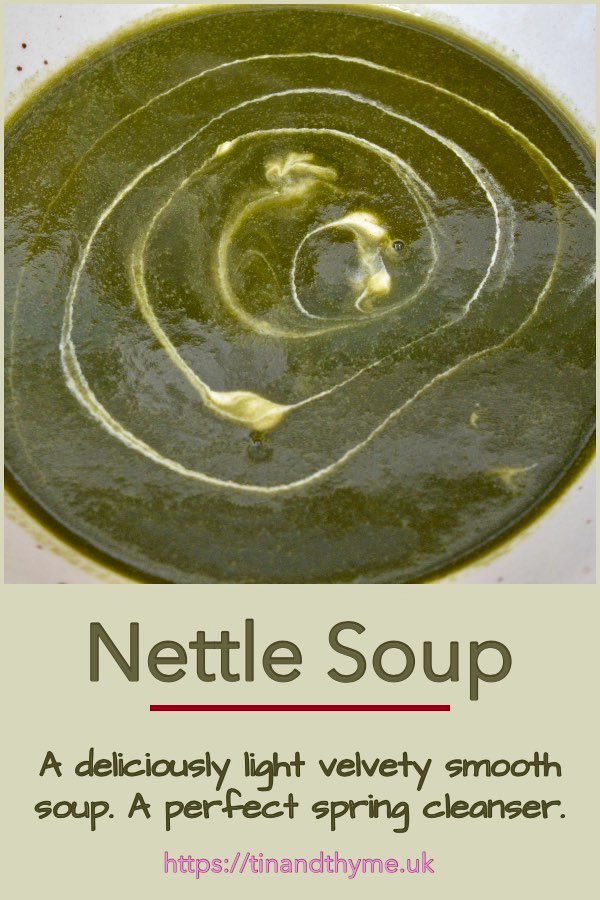 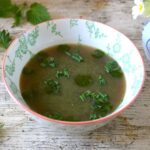 You can use ½ to 1 tsp salt instead of tamari, but it won't have quite the same depth of flavour.  If you don't have a leek, just leave it out and use a large onion instead of a small one. Please note: calories and other nutritional information are per serving. They're approximate and will depend on exact ingredients used.

I’m sending my nettle soup off to No Croutons Required at Tinned Tomatoes.

I use my Optimum Blenders for smoothies, spreads, sauces and even chocolate making. The post contains affiliate links. If you buy through a link, it won’t cost you any more, but I’ll get a small commission. Thank you for supporting the brands and organisations that help to keep Tin and Thyme blithe and blogging. Opinions are, as always, my own.