Beautifully rich and fudgy with lots of sugar and butter, these real chocolate brownies are made with cocoa powder rather than chocolate. They’re also generously studded with walnuts for a tasty and satisfying crunch. 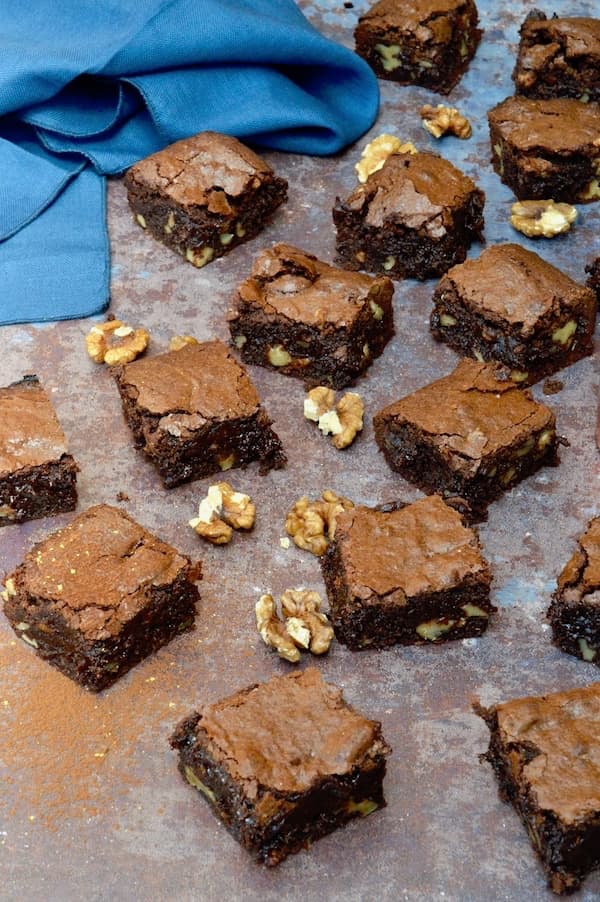 Not only do I love to eat brownies, but they are a joy to make too. Simple and quick, but with delicious results. This recipe is one I’ve adapted from Real Chocolate by Chantal Coady. It originated from someone called Mandy who married an Italian and went to live in Italy. All I can say is, if she took this recipe with her, she will have made herself one very popular woman.

Things aren’t what they used to be and when it comes to food, I reckon this has to be a good thing. Some of us are old enough to remember the dire state of British cuisine in the 1970s. During my childhood “real” chocolate wasn’t something that ever crossed my radar.

Luckily Chantal Coady came to our rescue; she is the doyenne of chocolate in the UK, educating us all into the delights of the real deal. Us Brits now know there is more to chocolate than a slab of Dairy Milk, oh yes indeed. Her book, Real Chocolate, first published ten years ago in 2003, not only includes a host of mouth watering recipes, but gives the history of chocolate and promotes its many health benefits to boot.

Chantal founded the Campaign for Real Chocolate, The Academy of Chocolate and co-founded The Chocolate Society. She also owns one of the best chocolateries in London, Rococo. I think you could describe her as a chocolate fan. Anyway, I was keen to try her real chocolate brownies.

Astonishingly, I’ve never visited the shop, although I have tasted some of the chocolate. I thought I was highly adventurous when I first tried her rose chocolate many years ago. It remains one of my favourite chocolate bars. Not that I get to eat it very often.

Well, it seems I’m fated to miss chocolate courses with Chantal. A couple of years ago I booked on one of her courses in Bath and I was really looking forward to it. Sadly it was cancelled and I never did get to attend.

Last year, the ever enterprising Vanessa Kimbell invited a group of bloggers to visit the Rococo chocolate factory in South London, but I was unable to make it and was thwarted once again. I heard what a wonderful time everyone had. Much chocolate was sampled and I tried very hard not to be envious.

On the back of the rave reviews I heard about the chocolate goat’s cheese truffles everyone sampled, I made some of my very own.

There’s nothing frugal about this recipe for real chocolate brownies. These are the real deal and call for good quality ingredients. Full of butter, sugar and eggs, they’re decidedly wicked. But they are tempered a little by lots of bitter cocoa powder and the addition of a generous amount of walnuts.

I’ve tempered it further by using wholemeal spelt flour rather than plain white. I’ve always found wholemeal works well in brownies. It somehow adds to the fudgy consistency and takes a slight edge off the guilt factor.

I halved the quantities as best as I was able, as just looking at the mega amount of sugar (675g) nearly gave me a heart attack. I’ve lost a few grams, but I don’t think it makes much difference in the overall scheme of sugar consumption. Despite the reduction, my recipes still produces sixteen pieces that are big enough to satisfy without feeling you’ve overdosed.

The first time, I made these real chocolate brownies, it was to take with us to a friend’s where we were going for dinner. Somewhat annoyingly I under-baked the brownies. I say somewhat, because actually I much prefer an under-baked brownie to an over-baked one. And usually by the next day they have firmed up to form an exceptionally good squidgy brownie.

However, as I made these shortly before leaving, I didn’t feel I could take along a plateful of dripping goo, so I took the edge pieces and left the middle ones at home for us. That’s my excuse anyway.

The brownies are some of the best in my rather extensive brownie repertoire. They’re rich, crunchy, beautifully fudgy and taste divine. What more can I say?

My one-pan brownie method really is the bees knees. It saves on both time and washing up. So I follow my method, rather than the one given in the original recipe.

Place the butter in a large pan and place over a low heat to melt.

Cut the butter into small cubes before adding to the pan. Butter can take a lot longer than you think to melt if you add it as one big lump as I’ve done in the photo here.

Use a whisk or wooden spoon to mix the cocoa into the melted butter. Stop as soon as the mixture is smooth and there are no lumps of cocoa left.

Use a good quality brand of cocoa such as Green & Black’s or Food Thoughts. You’ll notice the difference.

Whisk or stir in the sugar, depending on whether you opted for a whisk or wooden spoon.

Whilst you can use golden granulated sugar, golden caster sugar is best as it’s finer and will thus mix in more easily.

Pour in the vanilla extract. Then beat it in the eggs with your chosen implement, one by one, until you have a smooth and glossy batter.

You can use three duck eggs, two turkey eggs or one goose egg instead of hens eggs. All of these are excellent for baking. See my post on duck eggs to find out why they’re so good. As you can see from the photo above I used a goose egg this time.

It’s easy and much cheaper to make your own vanilla extract. Just steep a vanilla pod or two in vodka. Use a jar with a tight fitting lid and leave in a cool dark place for a month. Shake from time to time.

Stir in the flour until the it’s just incorporated. Unless your flour is particularly lumpy, there’s no need to sieve it.

I mostly use wholemeal spelt flour for these brownies. But it’s fine to use ordinary wholemeal flour or other whole wheat varieties such as emmer. Alternatively, try rye flour for something a little different.

Roughly chop the walnuts, then stir them into the mix.

Walnuts add a lovely crunch to these real chocolate brownies, but if you don’t like them, it’s fine to leave them out. Alternatively try pecans instead.

Scrape the batter into a twenty centimetre (eight inch) square silicone mould or lined tin. Bake for about thirty minutes or until a firm crust has formed on the top, but there’s still a bit of a wobble when you shake the pan.

If you find your brownies are a little too gooey when you try and cut them, you can do one of two things.

Thanks for visiting Tin and Thyme. If you make these real chocolate brownies, I’d love to hear about it in the comments below. And do please rate the recipe. Have you any top tips? Do share photos on social media too and use the hashtag #tinandthyme, so I can spot them.

If you’d like more recipes using cocoa powder, follow the link and you’ll find I have quite a lot of them. All delicious and nutritious, of course.

I’m submitting these real chocolate brownies to the joint We Should Cocoa and Random Recipe challenge with myself and Dom over at Belleau Kitchen.

Yay, I have access to duck eggs again. Those lazy ducks like to have an extended Christmas holiday I’ve noticed and it seem to last for several months. Anyway to mark this bake made with duck eggs from a local small holding which has real free ranging birds, I’m sending some of these real chocolate brownies to Shop Local over at Elizabeth’s Kitchen Diary.