Welcome to In My Kitchen Three. Enjoy a quick peek at some of the items that have passed through my kitchen during February and beyond. 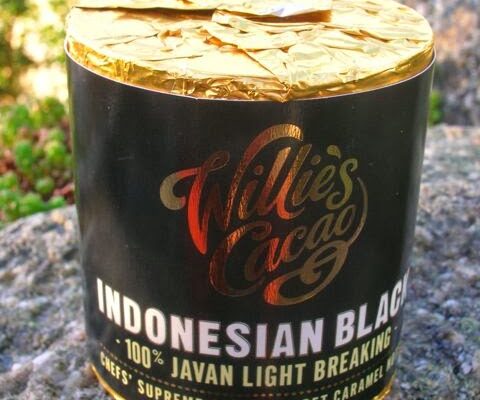 In My Kitchen Three

It’s been a long time since I participated in Celia’s wonderful In My Kitchen series over at Fig Jam and Lime Cordial. Since then I’ve had many comings and goings into my kitchen and store cupboards, the majority of course I haven’t documented. Here are a few of my favourite things … which are currently sitting in my kitchen.

A newly purchased block of Willie’s Cacao Indonesian Black – 180g of solid 100% chocolate. This is a bit of a luxury, but it’s useful and I use it sparingly.

Cornish Narcissi – In My Kitchen Three

A vase of scented Cornish narcissi, a gift from yesterday’s visitors.

Quail Eggs – In My Kitchen Three

A few quails eggs remaining from this basket, given to me by fellow Cornish food blogger Jane Sarchet over at The Hedge Combers when I visited her earlier this week.

Some jars of blood orange curd I made a few days ago. Bloody marvellous, though I say it myself.

When I first saw these Afternoon Tea chocolates from Sent With a Loving Kiss, I was smitten and got very excited. This may not be a closely guarded secret, but I do have a weakness for afternoon tea. I ‘mm far more likely to give a tea party than I am a dinner party and if ever anyone wants to take me out (which doesn’t happen nearly enough) afternoon tea is what I would choose for preference. Luckily, I didn’t need to drop heavy hints to my nearest and dearest as I was sent a box to review.

Inside the box sat a cute little tin decorated with colourful teapots. When I opened the tin, the enticing smell of sweet chocolate leapt out at me and I was hard put not to take a bite immediately. The tin consists of twelve chocolate discs playfully decorated with dainty cupcakes, teapots and milk jugs: two dark, four white and six milk – something there to suit most tastes. Much as I wanted to dig into these straight away, I am being very restrained and saving them for a future afternoon tea party, or even for decorating an extra special cake.

Apart from the afternoon tea theme, I particularly liked being able to personalise the tins with my own messages. For my tin, I asked for the inscription “everything stops for tea”. I should have added “and if it doesn’t it ought to” but foolishly omitted that bit. This makes for a nice keepsake for the recipient once the chocolates have been demolished. I’m looking forward to using mine as a fun container for homemade biscuits or even chocolates.

A half eaten loaf of a no-knead spelt & rye bread made with my new silicone bread maker.

Cornish Red – In My Kitchen Three

My favourite Cornish Red side plates sitting in the drying rack, having been used for tea yesterday.

Seville Marmalade – In My Kitchen Three

A jar of my mother’s just made Seville orange marmalade.

When I was asked if I’d like to review one of the pieces from the site, I became quite feverish and spent an inordinate amount of time imagining my home bedecked in all things red as I hopped from one item to another. The pieces are interesting and often quirky; trying to choose only one item was very very hard. I loved the clocks and would have been happy to relieve Red Candy of several of these, but sense asserted itself. How many clocks can my kitchen take? Much as I wanted one, I realised they didn’t really fit in with my blog so I had a rethink.

A Nice Cup of Tea

Tea, however does. It’s the perfect accompaniment to a nice slice of chocolate cake or chocolate biscuit and it regularly features on my blog. Tea is my drink of choice. Not builder’s tea, very rarely any sort of black tea, but light and refreshing teas such as green and white, honeybush or my favourite, rooibos.

I also drink matcha and herbal teas some of which I gather from the garden. For preference I drink loose leaf tea. I find it is generally of a higher quality than that found in tea bags and thus has a better flavour. Also I can use the tea leaves a second and sometimes even a third time. But, I do not like the bitterness of over brewed tea, so a way is needed of getting those tea leaves out before this happens. I’ve seen any number of infusers over the years and none have ever worked so well as a removable infuser that sits in a teapot.

So, when I came across a bright red six cup teapot with inbuilt infuser by Price & Kensington, I didn’t have to think again. Not only do I not have a large teapot, I don’t have a red one at all. Well not one that is completely red anyway. The teapots on the site were many and varied, but all were red. Mine was one of the more conventional ones, but whilst I was tempted by some of the QDO designs, this, I thought, was the most practical.

Once I’d chosen, I awaited its arrival with trepidation. Would it live up to my expectations, or would the infuser fall apart at first use (which has happened before) or worse still, be a hopeless pourer, spilling more tea on the table than into the cup?

The pot duly arrived and I dashed off to make a pot of tea with it. I thought I’d try the last of my chocolate tea, a mixture of chocolate beans, rooibos and spices from Chash which I’ve been drinking on special occasions and this was a special occasion. The pot is big, red and shiny. This in itself makes me feel cheerful and puts a smile on my face. The infuser, I was relieved to find was quite sturdy. Its construction is stainless steel and it fits nicely into the teapot whilst still allowing the lid to go on and the tea to be poured. It has its own handle for easy removal at any stage of the process.

I was able to tap out the used leaves into the compost bin or out on the garden quite easily. This oh so wonderful teapot is not only a great pourer, but not a single drip has it left anywhere it shouldn’t. The spout is a slightly different shape to others I’ve seen. The tip is a bit flattened, which I guess accounts for its amazing non-drip proclivity. It now sits happily in my kitchen where I shall happily use it again and again.

Perhaps not surprisingly, I have a chocolate shelf. With chocolate being this blog’s raison d’être, it is an ingredient that I just cannot be without. Whilst Green & Blacks, is my go to chocolate for most things, I have an eclectic mix of different types and brands.

Because I’m a hoarder and also like to be as economical as possible, I tend to buy my staples in bulk and store them in large glass jars – preferably with red lids. In an ideal world, I would have a nice walk in larder and everything would be tidy and easy to access. In actuality, space is an issue and ingredients can be somewhat inaccessible.

In an attempt to get organised one day, I decided I would keep all of my various flours (I have a lot) in a basket. As you can see from the picture, that basket has now become a repository for anything I can’t find a place for somewhere else – oops!

A Passion 4 Juice – a wipe clean booklet of juice and smoothie recipes that I won from Vanesther’s Family Foodies blogging event over at Bangers & Mash. It arrived in the post a couple of days ago.

You may not think of jigsaws as kitchen items, but in my ideal kitchen I’d have a table that would be large enough to accommodate the odd jigsaw.

As regular readers will know, chocolate on this blog comes in many forms. This time it comes in the form of a jigsaw. A wooden Wentworth jigsaw, entitled Decadence, to be precise. The chocolates depicted on the front of the box look decadent indeed. I can’t help but wish that on completion, those tempting looking chocolates would turn into the real thing. Maybe it will, who knows?

I haven’t completed the jigsaw yet. In fact, I haven’t even started it. My table is just too cluttered with Christmas stuff at the moment and with the best will in the world, there’s no room for a jigsaw. However, it will be clear by Christmas and I am really looking forward to getting stuck in. I love doing jigsaws. My mother loves them too, so once I’ve tackled it successfully, I shall pass it over to her.

It’s not a large jigsaw, as it only has 250 pieces, but it looks as though it’s a tough one. It has similar colours and a repeating pattern of the chocolates. That’s lucky, as I don’t like my jigsaws to be too easy. It’s also rather a tactile one as the pieces are made of wood and are actually quite chunky but with a pleasingly smooth finish. No splinters to spoil the enjoyment here.

The pieces are also wonderfully quirky, or at least some of them are. On sifting through them I found several shapes suitable for a food loving person: a spoon, a fork, cakes and pieces of chocolate to name but a few. I understand there is even a chocolate fountain dripping with chocolate, but I didn’t come across that one.

When I first opened the box, I was delighted to see a drawstring cloth bag containing the pieces rather than the inevitable utilitarian and rather annoying plastic. The box itself is sturdy and is not likely to fall apart with a bit of rough handling, not I hasten to add that I would handle my boxes or anything else roughly. There’s no doubt about it, this jigsaw is not only a thing of beauty but also of exceptional quality.